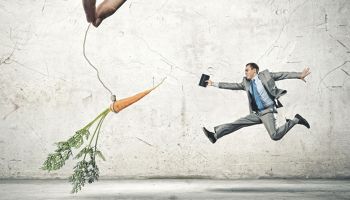 A recent nationwide survey of 296 bank executives indicates many institutions’ incentive programs are falling short of their goals. As a result, many banks could be failing to realize the full benefits that their investments in pay-for-performance strategies could provide.

Every year, Crowe Horwath LLP surveys financial institutions throughout the U.S. about compensation trends, benefits, incentives, and other human resource issues. The 2015 Crowe Financial Institutions Compensation Survey* reveals some encouraging signs about how banks use incentive programs to reward performance and motivate employees. The survey also indicates several areas where banks have opportunities for improvement.

Employee performance incentives have received considerable attention in the financial services industry over the past few years. Much of this attention stems from the 2010 interagency guidance on incentive compensation issued by the Federal Reserve, the Comptroller’s Office, FDIC, and the Office of Thrift Supervision, since merged into the OCC.

1. An appropriate balance between risk and reward.

3. Strong corporate governance including active oversight by the board of directors .

The 2015 Crowe survey indicates many institutions are still falling short of these principles, particularly in the area of active board oversight. For example, when asked about their incentive plan design and governance strategies, fewer than half of the respondents in the 2015 survey said their board compensation committees reviewed and approved their plans.

Moreover, in the years since the interagency guidance specifically called for active board oversight, the proportion of surveyed institutions that actually engaged in this practice has fluctuated significantly, and actually was lower last year than it was in 2010 before the guidance was issued.

The 2010 interagency guidance focuses on discouraging excessive risk and the undesired behaviors that tempt employees to perform in ways that harm bank safety and soundness. However, the guidance does not address the issue of evaluating the effectiveness of incentive programs in encouraging desired behaviors or improving performance.

Although these topics were outside the stated purview of the interagency guidance, performance and effectiveness obviously are primary concerns of the executives and boards who develop and approve such programs. The Crowe survey provides some insights into these issues and suggests some ways banks might be able to improve the return on their investment in incentive programs.

The vast majority (84.8%) of 2015 survey respondents said their institutions have pay-for-performance programs in place, and responses to other questions suggest these programs are having some effect in rewarding employees for above-average performance.

For example, as Exhibit 2 shows, over the past six years employees whose performance was rated below average consistently received very modest salary increases averaging only 0.7% percent a year. 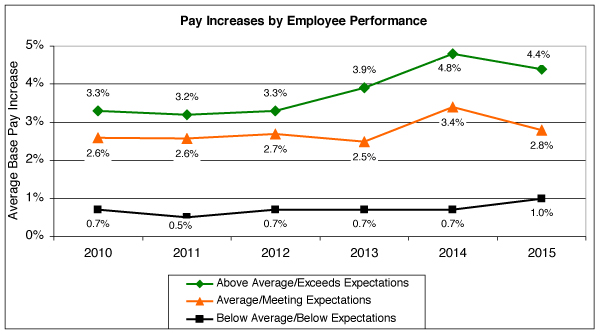 On the other hand, as banks emerged from the recession, employees who merely met expectations began to receive slightly larger increases in base pay, while above-average performers saw much larger annual increases. This widening gap in salary increases suggests that banks are becoming more active in tying pay raises to performance.

At the same time, the ratio of cash incentives to cash base pay also is trending generally upward, albeit with some fluctuation. This general upward trend is another indicator that more banks are using incentives as a way to encourage improved performance, as in Exhibit 3. 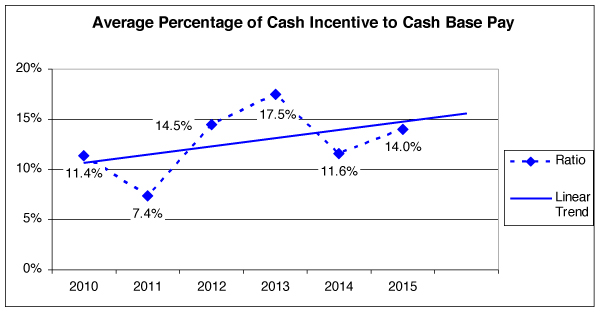 On the other hand, some other survey responses call into question the overall effectiveness of many programs. For example, a third or more of the various incentive plans cited in the survey were characterized as annual discretionary cash bonuses (Exhibit 4). Such bonuses are awarded based on a manager’s discretion rather than being tied to specific performance metrics. These are inherently less effective than incentives tied to specific, measurable goals. 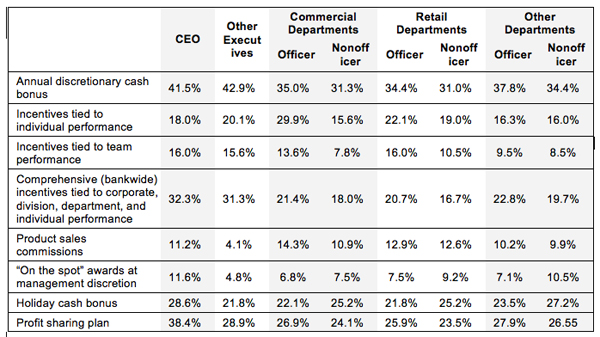 Furthermore, as Exhibit 4 also illustrates, a relatively small proportion of incentives are tied to individual performance. While corporate profit sharing plans and holiday bonuses can help build loyalty, they have little direct effect on specific employee behaviors or activities, simply because the average employee sees very little direct connection between his or her individual performance and the incentive being awarded.

These survey responses suggest that many institutions could find opportunities to improve the effectiveness of their pay-for-performance programs significantly by decreasing their reliance on discretionary bonuses, and by tying incentives more directly and more visibly to the desired employee behaviors, attributes, and achievements.

To be effective, an employee incentive or pay-for-performance program must be clearly communicated to those who are eligible and should be based on performance metrics that the affected employees can directly or indirectly influence. While these observations might seem self-evident, the 2015 Crowe survey indicates banks often lose track of these concepts.

For example, a surprisingly high number of institutions fail to include an explanation of their incentive compensation plans in their new hire orientation processes.

The numbers have fluctuated somewhat over the past few years, but at no time before 2015 did more than one-third of the surveyed institutions report that they include such an explanation as part of their orientation process (Exhibit 5). In 2015, fewer than a quarter of the banks surveyed did so. 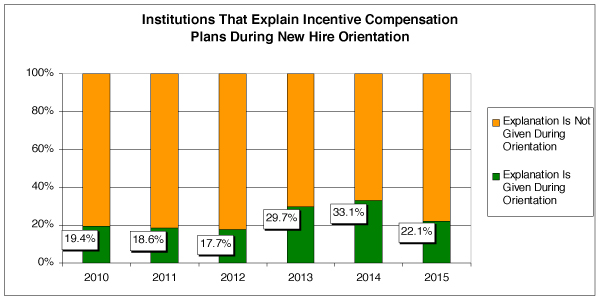 If performance incentives are not explained to employees, there can be little doubt that the incentives will fail to generate the best possible results.

Moreover, an initial explanation of incentives is only a first step. Effective communication requires repetition, which means employees should receive recurring reminders, as well as regular reports or scorecards that let them know where they stand in terms of qualifying for incentives, and what steps they can take to achieve the next level.

Above all, the metrics by which incentives are determined must be meaningful and transparent to the employees. A “one-size-fits-all” program based on corporate or division performance is less effective than a multifaceted program that tailors the metrics to individual and team performance.

While incentives for a CEO or CFO can be fairly based on broad metrics such as revenue growth or profitability, other executives’ performance evaluations should track indicators that relate to their specific areas of responsibility, such as loan or deposit balance growth, credit quality, or customer service and satisfaction rankings.

This principle is equally applicable when incentivizing mid-level managers and individual employees. Devising meaningful individual performance metrics can be a challenge, but the effectiveness of a pay-for-performance program depends on them.

Finally, all those involved with designing and developing incentive plans should thoroughly understand the 2010 interagency guidance. As noted earlier, the Crowe survey responses suggest quite a few plan designers and administrators are not familiar with the guidance, particularly the recommendation for active board oversight of performance incentives.

This requirement will become even more critical in coming months, as various other regulatory changes—such as the Labor Department’s forthcoming rewrite of overtime rules for salaried employees—will further complicate the design of bank compensation programs. By re-evaluating performance incentives now, financial institutions not only can avoid potential regulatory concerns, but also can achieve a better return on their pay-for-performance investment.