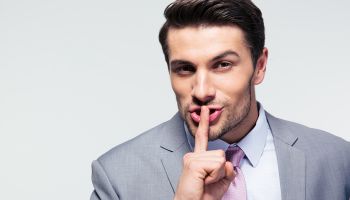 As bankers, we walk around with a great deal of sensitive information in our heads.

My big boss’s secretary several years ago was a woman who combined a capacity for work, wisdom, and invaluable advice. I still think of Kay often and of what I learned from her.

In this age of the sensitivity of the security of information, whether it’s personal such as medical or business, we are regularly confounded by a combination of our own carelessness and an occasional obsession to share a tidbit of confidential information with another.

Kay reminded me from time to time of a reality of human interaction.

There are two categories of secrets, she would remind me, “Too good to keep and not worth keeping.”

How often have we intentionally—but not in a mean-spirited way—shared a confidence that was really beyond “shareable?”  Be honest.

Keeping it on the QT

Those of us who have banked small business owners know how secretive they often are about their financial information.

Why? Because their financial information is competitively sensitive in a way that we can hardly appreciate, even as their bankers.

I remember one such customer who never wanted to talk about his information in the bank. He wanted me to come to his office, which I occasionally did at his request. There, we would discuss his matters in the privacy of his conference room.

On those rare occasions that we talked business in the bank, he wanted us to get under my desk so no one could possibly hear what he needed to share with me.

I exaggerate, but not by a whole lot.

Do you talk business over lunch in public places? This story may be a caution to you.

A friend of mine was in a restaurant on a Sunday afternoon recently with a small group of friends. Their conversation was a blend of business and personal chatter.

At a nearby table, there was a single diner with an open laptop who was within earshot and could easily have overheard all or most of the conversation.

Was there information of a personal or business nature exchanged? Did that sole diner Google a morsel of information that he may have overheard from the group?

Probably not, but it occurred to one of the group as they were leaving the restaurant that perhaps the contents of their exchange was not entirely appropriate for a public venue.

How often does something like this occur to us before the fact?

And in this day of smart phones and tablets, it doesn’t take a laptop to seek out a name or company that’s overheard.  Maybe it’s smart to expand the places where you apply the “elevator rule.”

Watch what you say and to whom

I was a member of my bank’s “management committee” in an earlier position. Our chairman was an entertaining raconteur with humorously told stories about people and events in our local community.

The thing of it was, these tales were often sensitive, sometimes confidential, and occasionally unflattering to the subject.

I often thought that if he’d say things like that to entertain us at management meetings, what was he saying about us or our customers to others?

Is there a right to expect confidentiality?

As a financial advisor to businesses and business owners whom I banked, I would talk freely with the implicit assumption that what was exchanged between us was mutually confidential.

How else does one conduct business of an inherently sensitive nature? We do not sign confidential agreements each time we talk though with some persons, perhaps we should.

Remember Governor Romney’s “47%” conversation in 2012 at a Florida fundraiser?

His words were recorded by a bartender and obtained and released by the governor’s political enemies. That’s a convenient and urgent example of how we should be more cautious but often are not.

There are loads of business examples from cocktail receptions to dinner parties to conversations on airplanes between or among people who have no reason to be sharing information so freely and so casually.

I’m not saying that we should not seek out useful but sensitive information in other ways.

I, for example, improved on my ability to read upside down and I regularly scanned computer screens where the screen savers had not yet become operational.

That’s “fair game” and arises from carelessness on the part of others.

But senseless blabbing about a customer’s business to anyone without a need to know is potentially harmful. It can create an injured party and a perpetrator.

Reputation risk includes how you are perceived

There is much information in the public domain that may be shared without fear of recrimination. But even in such circumstances as those, why should we expose ourselves to the supposition that we are loose or slanderous with anyone’s personal information?

We have an image problem as bankers these days. It’s not deserved in the overwhelming majority of situations. Those isolated acts of malfeasance by the few should not tarnish the reputations of all bankers. But, in this day and age, it unhappily seems to.

Overcoming this will take thought, and action. Sometimes that action is to watch what comes out of our mouths, into our emails, into our texts, and onto our social media posts.

Let’s examine our practices, often-thoughtless items of a routine nature, and be sure we’re not transmitting the wrong sorts of things to the wrong sorts of recipients. Consider actions like messages left on voice mail and threaded emails containing sensitive or embarrassing information to earlier recipients having nothing to do with later recipients.

We are multiplying the ways of delivering and sharing information and in particular the printed word without a corresponding appreciation for the “tracks” that we leave.

But our ancient ancestors had a sense that anything said orally or committed to a written record acquired a life of its own independent of the author or originator.

If that was true thousands of years ago, how much more applicable and appropriate is that concept today?

More in this category: « Why don’t we water our garden anymore? Political forecast: Hazy, high chance of folderol »
back to top