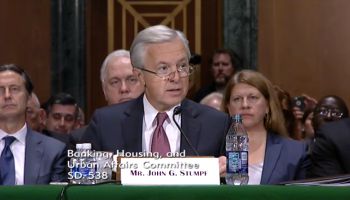 We’ve asked several Banking Exchange bloggers and other contributors to examine the Wells Fargo affair from the vantage of their areas of specialty. In this special installment of “Talking Credit,” veteran banker Ed O’Leary gives the gut-level thoughts that came to a banker’s mind as he watched and read about the Senate Banking Committee’s Wells Fargo hearing.—Steve Cocheo, executive editor and digital content manager

Early this week we got a good look at the scope of Wells Fargo's problems in the testimony by Chairman and CEO John Stumpf and the questions put to him by the Senate Banking Committee.

It was not a pretty sight and must have been an awful ordeal for Stumpf, who seems to be an honorable and decent person. This must also be a tortuous time for Wells employees who are suffering the humiliation of public approbation from the deeds committed by aberrant employees on the retail side of the corporation. This is a simple case of guilt by association and it’s probably unavoidable.

There are many themes that could be taken from the hearings—issues such as accountability; appropriateness of clawbacks of bonuses and salary; outright firing of top-level managers; harm to customers; and even harm to Wells itself at the hands of the miscreants. These will sort themselves out in coming weeks and months.

But I have three enduring reactions from last Tuesday and they are my gut-level reactions as a lifelong commercial banker and lender.

They won't necessarily be my final thoughts, either.

Wells is in a very deep hole.

The potential for litigation is huge. Senators raised issues that they probably have heard from their constituents. These ranged from financial harm due to fees charged on inappropriately opened accounts to rate penalties resulting from credit bureau scores driven by algorithms relating to the number of bureau inquiries made within a specific time period.

Stumpf as CEO has committed to do what is right by Wells customers. However, in this litigation-prone environment we all live in, what has he committed to do?

Open Wells’ checkbook to all assertions of wrongdoing? Has he given a very long life to issues that are the bread-and-butter of class-action lawyers?

This process includes involvement of both victims and predators, unfortunately.

Gut concern #2: We must rebuild trust

The principal wreckage we’re looking at is the harm done to the public’s perception of Trustworthiness of the entire Wells organization—and by inference, the rest of the industry.

Trust is the coin of the realm of most business, but it’s fundamental to banking.

George Bailey is the movie version of the archetypical banker and he is the image of what all bankers aspire to be—honest, concerned, helpful, reliable, and—above all—honest and trustworthy.

Something’s changed now. It’s been underway for a while.

I personally date the erosion of business integrity as starting with the Enron revelations nearly 20 years ago and spreading to the banks, particularly the larger ones, in the wake of the Great Recession that began with the collapse of Lehman Brothers in 2008.

“Business anthropologists” in years to come probably will cite additional factors and date the changes to much earlier in the 20th century.

The sheer volume of the numbers of banks and bankers whose shameful behaviors were vetted starting in 2009 and fines paid by the institutions since then has contributed to a serious undermining of public trust in banks.

Senator Bernard Sanders’ oft-quoted campaign trail comment that the “business model of banks is fraud” seems self-fulfilling in the wake of the Wells Fargo disclosures.

Trustworthiness is the biggest casualty right now. And it is the first thing that the industry needs to work on and get right.

As I read the various accounts of the misdeeds occurring in Wells’ retail bank, I wonder if this failure in the primary dimension of trust could have broader implications for the industry.

Could these disclosures trigger a sort of long-term erosion of Wells’ retail business? What sort of “gift” have we as an industry just handed to our non-bank competition?

I have a feeling, too, that the problems are hardly confined to Wells Fargo or to the banking industry. There has been a steady decline in personal integrity and related behaviors for many years now, involving all segments of the workplace. There are studies that confirm these tendencies, though they have received insufficient attention by all segments of our society including our regulators, our political leadership, and ourselves.

Time to get constructive

We need to recover from the scapegoating phase quickly. This is an inevitable consequence of recent events. But it leads to nothing positive. So let’s jettison this baggage as fast as we can.

One senator the other day talked about the need to change processes in Wells’ retail bank.

That caused me to think that it’s the best place to start both at Wells and at your bank and mine. In the process of doing that, let’s reinforce some very common, durable, and reliable internal controls. Without those sorts of governors on the process, we can’t reliably predict the outcome.

I ask each of you to think of the times that you (and I’ll include myself in this) have winked at internal controls and done something different in the name of customer service.

Well, it’s time to stop that in its tracks and I bet this would propel us a long way to where we need to be in the restorative process with our public and with each other.

More in this category: « Handling the Wells dilemma How to make ideals engage reality »
back to top