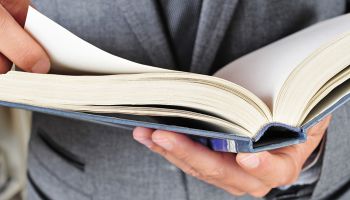 There was an interesting book review published on this site in recent days that reminded me of good advice in a related vein from my father.

Paul Smith’s book, Sell With A Story, was reviewed by Lisa Rabinsky of CenterState Bank. The book contains a useful template for anyone looking for an organized and efficient way of using a story to assist people who are in sales sorts of capacities.

That of course includes almost everyone who works for a bank.

How to get comfortable telling stories

My father was for several years a corporate publicist for a large international conglomerate. He travelled extensively and met a constant stream of people who were doing business with his employer. And he was also the best storyteller I have ever known.

When I was probably in the seventh grade, the first year of junior high school, he told me that it would serve me well if I never missed an opportunity to “speak on my feet,” which was a euphemism for public speaking.

I tried to take that advice seriously and so within a very few years I was comfortable with speaking to groups of people. I never spoke to large numbers at any one time but I certainly overcame any reluctance to speak to a group of strangers.

The next really useful advice was that I should learn how to tell stories well. As in Sell With A Story, my father would say that an illustration of some seemingly prosaic point with a good “on point” story (and if humorous, so much the better) was always useful.

Dad was a hilarious teller of stories. People would remember a story he told maybe months before but not well enough to retell it themselves. “Tell us, Eddie,” they’d say. “How did that story go again?”

Many people I’ve observed over the years try to use humor in their interactions with customers and prospects. But many of the stories I’ve heard exchanged between customers and bankers have been awful. They simply weren’t funny. Or they weren’t told well. Or both.

You do have to be honest with yourself about humor. I’ll get to that in a moment.

As a professional storyteller so to speak, he had his rules. I remember them to this day, though he’s been deceased many years.

• First, the story should be brief. No “shaggy dog stories.” No magillahs. Get in and get out quickly.

• Second, never generate a laugh at anyone’s expense. Be respectful and kind.

• Third, use your God-given talents—but critically appraise what they are. For example, some people can imitate dialects well and some can’t. Understand whether you can or you can’t and act accordingly.

• Finally, eyewitness stories are the best.

That’s why I suppose I feel that young people aren’t typically the best storytellers, unless the purpose is solely to generate a laugh.

Older people tend to better understand—through the perspective of their life experiences—the incongruous events or circumstances that have their basis in actual events. It’s the incongruities of every day life that are noteworthy. These are also the ones that are really funny—and memorable—in the telling.

People are people—respect them all

My father grew up in the Depression era, a time preceded by enormous inflows of immigrants from Europe—Italians, Irish, Germans, Russians, and more. Many had been persecuted as victims of religious strife and intolerance. He grew up with them and their children and fundamentally understood that they were persons worthy of our empathy and not our ridicule.

The standard “wisdom” today is to eliminate any form of ethnicity in a story. That’s good advice today, especially in this time of diversity. But Dad could tell ethnic stories because he was one of them, as the son of Irish immigrants himself. The lesson here is an important one—be respectful of your story’s characters, and that point transcends ethnicity.

“Remember the, uh … right, the punchline!”

One thing that I started to do, probably at Dad’s suggestion, was to write down the punchlines of stories. A strong punchline is golden and usually the most important part of a successful effort.

In one of my moves through the years I’ve lost the original notebook but I’ve reconstructed what I can remember and added more to the second iteration of that effort.

So two lessons that served me well as a banker that came down to me over the years from my father: don’t miss an opportunity to speak to a group and ruthlessly assess your skills in using stories in your selling activities.

Not everyone is a Will Rogers or a George Burns. Each of us needs to understand where we fit along that continuum. And then figure out a reliable way to remember a story’s punchline.

We are sales people as bankers. Those actual words may not be in our job descriptions but our ability to meet people, put them at ease, and to build a sense of trust and rapport is essential to our long-term career success. We need to build our skills in these areas as competently as we build product knowledge and basic business skills.

People like to be around people who make them feel good. A good storyteller—not necessarily a jokester—is a characteristic shared by every good salesman.

More in this category: « What makes winning banks and bankers? Discrimination, lending, and banking’s talent shortage »
back to top