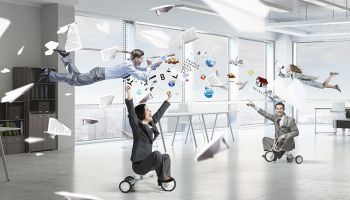 Shenanigans of all sorts in your bank or in the offices of a borrower can make business completely screwy. Ed O'Leary says the solution can often be pretty basic ... but effective.

There are many sources of dysfunction in today’s workplace. But none is more insidious and as unnecessary as personal conflicts or abrasive behavior between and among employees.

In fact such situations have reached the top of the news the past several days when Presidential Advisor Stephen Bannon was discharged principally for his disruptive behavior and Uber hired a new CEO replacing the controversial founder, Travis Kalanick.

Kalanick had frequently been in the news for alleged acts of sexual harassment toward employees and other disruptive activity among the senior management ranks and board of directors.

The news of the hiring of his replacement was notable for the expectation that the new leader will bring to the company a deep experience in running a profitable enterprise, a calming presence, and an inclination to stay out of the limelight.

Bankers occasionally see negative or erratic behaviors among their fellow employees. But the internal culture of a bank typically tends to suppress “maverick” or contentious behaviors. Failing that, the culture tends to ease such individuals out of the bank.

But lenders often are required to confront such behaviors within their customers’ workplaces.

Lenders are trained to analyze credit risk through the prisms of the Five Cs of Credit.

Where does dysfunction in the customer’s work place fit in terms of credit risk?

I’m not referring to a dishonest owner, officer, or employee. Rather, how should we view overt displays of negative behavior within the management ranks of the borrowing customer?

Can we be completely indifferent to them?

Clearly, something is amiss in such companies. If there’s disruption and the boss causes or contributes to it, what can you do?

Unfortunately, probably not much other than simply decline the business. Steps less drastic might include a tighter set of affirmative and negative covenants. Or perhaps greater attention to the bank’s collateral position.

Could the presence of this sort of dysfunction be considered a Character flaw?

Should this raise a red flag under the Character label?

My experience says that this is where such abnormalities should be classified. If the disruptive actions are voluntary and discretionary, then I think that these actions should have consequences. Might we conclude that our prospect or customer is not fully creditworthy because of his or her personal behaviors?

Sand in the gears

What’s more difficult to determine is an appropriate course of action if the disruption is caused by the chief financial officer or the treasurer—typically the person who is the principal contact point between the bank and the borrower.

Some might reasonably conclude, “It’s not my business.” Yet, if behaviors can lead to abrasions, miscommunications, or a failure to act or react appropriately by either the borrower or the banker, then such a situation is potentially problematic.

A number of years ago I banked a large developer on Florida’s Gold Coast. Over a period of 20 years, this individual had successfully developed a large mid-rise condominium community. He had been a longtime customer and a regular borrower of mid-seven figure proportions with everything always handled appropriately.

I was the new lender on his account and my principal contact was his CFO, who was also relatively new in his position. I liked the CFO personally and respected his competence and loyalty to his boss. Yet the CFO seemed to be constantly renegotiating the details of the deal.

This was back in the days when even in larger banks, most credit extensions and their terms were subject to committee approval. What made my job increasingly difficult was that I was responding to requests that were sufficiently material to require committee concurrence.

These changes were not much more than tweaks, really, designed to favor the borrower. But none of a magnitude as to represent a reason to deny the request or disrupt an otherwise cordial and professional relationship.

I quickly came to resent that I seemed to be cast in the role of “errand boy,” highlighting my lack of credit authority in being unable to simply acquiesce to the frequent but simple requests. I was constantly reactive with no material change to the credit—none to my way of thinking, anyway.

Any change large or small to a significant line of credit meant a lot of work—a significant paper shuffle, especially in view of the bank’s rigorous standards of documentation. That takes time and the tendency of this borrower to be disruptive of our internal processes was beginning to be noticed by my various bosses who sat on the credit committee.

My situation was aggravated in my own mind by my age relative to my customer and his CFO. I was in my early 30s and a brand new vice-president while the “old man” was in his mid 70s and the CFO was 55 or so.

Time to grow up

I finally realized that I was caught in a vise between the customer and the bank. I acted to extricate myself by having a very candid conversation with the CFO. He didn’t enjoy being told the impacts of his actions. But it was my responsibility to fix the problem, even if it meant the risk of negatively tainting the overall relationship.

This was one of the events along the way of my career where I simply had to grow up. There was no ducking the problem. Fortunately, the CFO ultimately realized my predicament and modified his behavior. But it could have had a different outcome.

The disturbing thing is the increase I see in workplace dysfunction due to otherwise controllable behaviors. This has the potential of disrupting relationships as well as skewing credit risk in some unpredictable ways. These will often be beyond our direct control. But we need to understand that simply ignoring these situations is unlikely to be in the best interests of the bank.

More in this category: « Ethics of the “last mile” of bank service Making the case for a banking career »
back to top