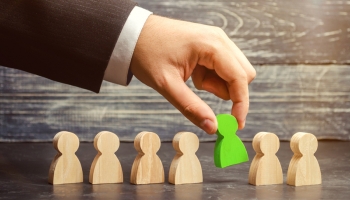 UBS — Ralph Hamers was this month named as the next group chief executive officer of UBS, with effect from November 1, 2020. He is currently CEO of ING Group, and will replace Sergio Ermotti.

Hamers has worked at ING since 1991, holding positions across business segments and geographies before being appointed CEO in 2013.

Axel Weber, chair of UBS Group’s board, said Hamers was “a seasoned and well-respected banker with proven expertise in digital transformation”.

Weber thanked Ermotti for his “exceptional commitment and contributions” as CEO since 2011, highlighting his leadership of UBS’ “transformation” in the wake of the global financial crisis.

He is currently the company’s treasurer but had been serving as interim CFO since September following the departure of Muneera Carr. Herzog has worked at Comerica since 1984 in various finance roles, the company said.

Stanislava Kostova, Comerica’s assistant treasurer has been named treasurer. She was previously a senior managing director at Wells Fargo Private Bank before joining Comerica in 2007.

Miebach, currently chief product officer, will take over from Banga as president of the company on March 1, 2020. Banga has served as president and CEO since 2010.

Capital Bank — Gary Kausmeyer has joined Capital as chief risk officer to replace Kathy Curtis, who will be retiring at the end of May. Kausmeyer has previously served in senior risk management roles at Banc of California, Los Alamos National Bank and First Place Bank.

Karl Dicker, Capital Bank’s chief operating officer, is to take on leadership of the OpenSky credit card business alongside his existing role. Nick Bryan, general manager of OpenSky, is leaving to run his own healthcare company, Capital Bank said.

Dicker joined Capital Bank in 2018 after 16 years at Capital One, which the bank said made him “uniquely positioned to manage OpenSky”.

BMO Financial Group — Cam Fowler has been appointed chief strategy and operations officer, effective March 1, 2020. He is currently group head of North American personal and business banking, having worked for BMO since 2009.

Mutual of Omaha — The Fortune 500-listed Rick Hrabchak has been appointed chief financial officer in addition to his role as chief investment officer. He has worked for Mutual of Omaha since 2016 as CIO and has been interim CFO since August 2019.

Prior to joining Mutual, Hrabchak spent 29 years with Prudential Financial in a variety of investment management and finance positions, including CIO of the US retirement business.

First Interstate BancSystem — Jim Scott is to step down as chair of First Interstate’s board on May 6, 2020, the group announced this month, as part of a “long-planned leadership transition”. He will remain a member of the board.

David Jahnke, currently vice chair and independent director, will replace Scott as chair. Jahnke joined the bank’s board in 2011 and was appointed vice chair last year. He previously worked at KPMG for 35 years with a focus on global financial services clients.

Scott has served the bank’s board for nearly 50 years, having joined as a director in 1971. He was named chair in January 2016. He is a member of the Scott Family that founded First Interstate and continues to own a shareholding.

Bank of Hawaii — Dana Tokioka, vice president of Atlas Insurance Agency, has been elected to the board of the Bank of Hawaii.

At Atlas she has worked on IT initiatives and financial reporting, and has “engineered and directed multi-layered risk programs” for a variety of companies, the bank said in a statement.

Separately, the bank has promoted Taylor Kirihara to senior vice president and market executive in its branch banking division, responsible for management of consumer banking-related activities for all branch markets. He joined Bank of Hawaii in 2011.

He joined KeyCorp in 2000 and was most recently head of home lending. He has also served as KeyCorp’s corporate treasurer as well as leading corporate strategy.

Associated Bank — Associated has made several changes to its leadership team. Kristin Isleib has been promoted to head of specialized lending, responsible for the group’s mortgage warehouse, healthcare, insurance, power and utilities, syndications and national banking groups. She has worked for Associated Bank since 2011.

Rod Murray has been promoted to head of commercial banking, overseeing Associated’s operations in Wisconsin, Illinois and Minnesota. He will continue as Chicago market president.

Craig Thessin is to lead the bank’s structured product group, a newly created segment that includes delinquent lending business in Illinois and Wisconsin.

Webster Bank — Jason Soto, Webster’s chief credit officer since 2018, has been promoted to executive vice president, responsible for credit risk activities across the organization. He joined in 2015 as senior credit executive following a long career in credit risk management at GE Capital.

He joins from the Federal Home Loan Bank of San Francisco where he was president and CEO since 2016. He has also held senior leadership roles at US Bank-California, Wells Fargo, Bank of America, Sterling Financial and Umpqua Bank.

M&T Bank Corporation — Aarthi Murali has been appointed chief customer experience officer, a newly created position. He will develop and lead a strategy to “create a distinctive and seamless customer experience across the enterprise”, M&T said in a statement.

Murali joins from JPMorgan Chase where she served for 17 years in a series of leadership roles, most recently leading the client experience for the company’s commercial bank.