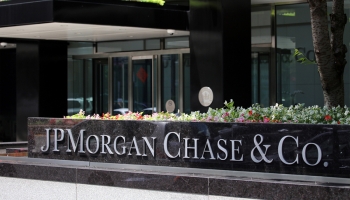 In a company-wide email sent March 5, the co-chief operating officers explained that JP Morgan’s board had put them in joint charge of the company during Dimon’s recuperation.

Gordon Smith joined JPMorgan Chase in 2007, leading Chase’s card, merchant services and auto finance business for five years before taking on his current role as co-president and COO in 2012.

Smith is also CO of the banking giant’s consumer and community banking arm, which oversees the US’s second-biggest branch network with 5,100 locations. It is also the top credit card issued and second-biggest mortgage originator and servicer.

Before joining JPMorgan, Smith held a number of senior roles at American Express.

Daniel Pinto has worked for JPMorgan Chase and its predecessor companies for his entire career, beginning at Manufacturers Hanover in Argentina in 1983. He has also worked for Chemical Bank across Latin America before joining Chase Manhattan in London in 1996.

He was made global head of emerging markets for the firm in 2006, and later led its global credit trading and syndicate business, before becoming co-head of global fixed income for the investment bank in 2009. He has been CEO of the corporate and investment banking arm of JPMorgan Chase since 2014, and was co-CEO for two years before that. He joined Smith as co-COO in January 2018.

Dimon received emergency treatment for an acute aortic dissection last week, which Pinto and Smith told staff was successful, with the CEO said to be “recovering well”.

Pinto and Smith told staff: “As co-presidents and chief operating officers, we have been working hand-in-hand with Jamie and the board over the past two years to help lead our company.

“This is in addition to directly running the firm’s corporate and investment bank and consumer and community banking businesses, which represent the majority of the firm’s businesses. We have also been deeply involved in all of the critical firmwide functions.”

Lead director Lee Raymond said in the note to staff: “Our board has been fully briefed on these developments and has asked Daniel and Gordon to lead the company during this period, as Jamie recuperates.

“We have exceptional leaders across our businesses and functions – led by our outstanding CEO and co-presidents. Our company will move forward together with confidence as we continue to serve our customers, clients, communities and shareholders.”

The Securities and Exchange Commission has been notified of the temporary change of leadership, according to documents filed last week.

Dimon has been CEO of JPMorgan Chase since December 2005, and was appointed chairman of the board a year later.