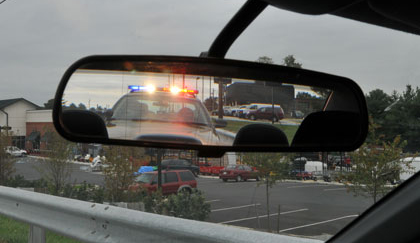 Severe enforcement actions, like bank failures and credit quality, continue to give evidence of an industry on the mend. 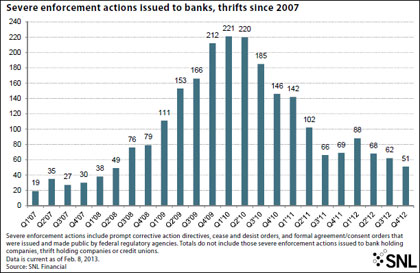 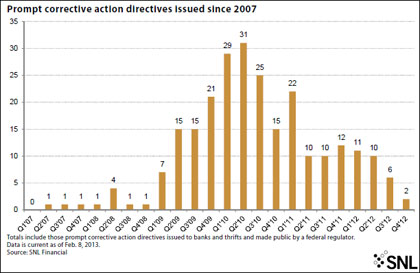 During 2012, 34 severe enforcement actions were handed to banks or thrifts headquartered in Illinois, the most in the nation, followed by Georgia with 26 and Florida with 24. Illinois' 51 actions in 2011 also led the nation that year, followed by Florida with 31 and California with 26. 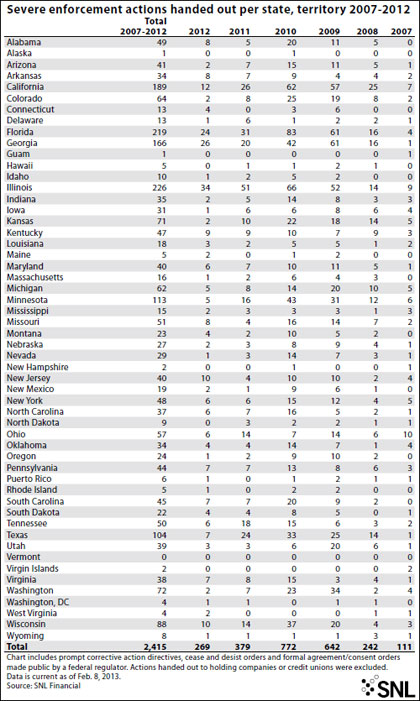 All four U.S. commercial banks with more than $1 trillion in assets, JPMorgan Chase Bank NA, Bank of America NA, Citibank NA and Wells Fargo Bank NA, entered into written agreements with the OCC in February 2012 tied to the companies' handling of foreclosure proceedings. Each of these banks is operating under multiple severe enforcement actions issued after the credit crisis broke. JPMorgan Chase, the U.S.'s largest bank by assets, picked up its fourth active severe enforcement actions after receiving a cease-and-desist order in January of this year tied to the bank's chief investment office and the trading of credit derivatives. 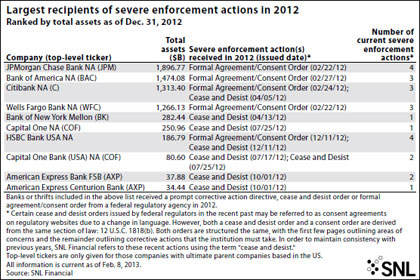 Many of the 16 severe enforcement actions handed out in December contained specific capital guidelines.

Certain cease-and-desist orders issued by federal regulators in the recent past may be referred to as consent agreements on regulatory websites due to a change in language. However, a cease-and-desist order and a consent order are derived from the same section of law: 12 U.S.C. 1818(b). Both orders are structured the same, outlining areas of concerns and the corrective actions the institution must take. To maintain consistency with previous years, SNL Financial refers to these recent actions as cease and desist orders.

Washington, Mo.-based Bank of Washington received a cease-and-desist order from the FDIC on Dec. 27 requiring the bank to maintain a Tier 1 leverage capital ratio of 8% or more and a total risk-based capital ratio of at least 11% for the life of the order. 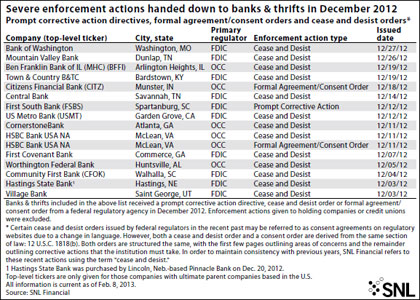 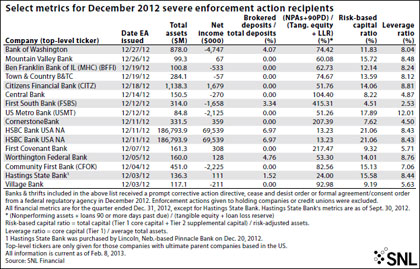 McLean, Va.-based HSBC Bank USA NA received both a cease-and-desist order and entered into a written agreement with the OCC on Dec. 11 tied to findings of serious weaknesses in the bank's enterprise-wide compliance program. The OCC in combination with the U.S. Department of Justice, Board of Governors of the Federal Reserve, Financial Crimes Enforcement Network, Office of Foreign Assets Control, and New York County District Attorney's Office levied a total of $1.92 billion in penalties against HSBC Bank USA NA and its parent, HSBC Holdings Plc.

According to the U.S. Treasury Department's press release, the lapse in HSBC's anti-money laundering systems allowed "hundreds of millions of dollars" from Mexican drug traffickers to flow through U.S. accounts. HSBC's affiliates also processed transactions through U.S. institutions that involved countries or other entities subject to U.S. sanctions.

Commerce, Ga.-based First Covenant Bank received a cease-and-desist order from FDIC on Dec. 7, requiring the bank to maintain Tier 1 capital equal to at least 8.5% of total assets and total risk-based capital equal to 10% or more of total risk-weighted assets within 90 days from the issuance of the order.

Huntsville, Ala.-based Worthington Federal Bank received a cease-and-desist order from the OCC on Dec. 5, requiring the thrift to maintain Tier 1 capital equal to at least 9% of adjusted total assets and a total risk-based capital ratio of at least 13% by March 31.

Hastings, Neb.-based Hastings State Bank received a cease-and-desist order from the FDIC on Dec. 3, stating that the bank engaged in "a scheme to mislead regulators and customers regarding the issuer of credit life and disability insurance policies, and by diverting premiums for such policies to a related entity." The bank's merger with a fellow Nebraska-headquartered bank, Pinnacle Bank, was completed Dec. 20.

St. George, Utah-based Village Bank received a cease-and-desist order from FDIC on Dec. 3, requiring the bank to attain and maintain enough Tier 1 capital that the bank's leverage ratio is 9% or more within 120 days from the issuance of the order.