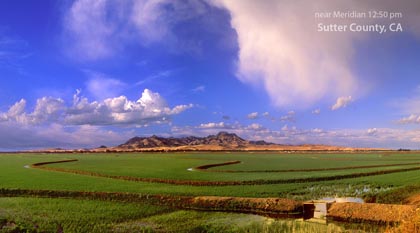 Tri Counties Bank serves a region where residents are deeply rooted in their landscapes, farms, and towns. Images such as these, portrayed using digital signage throughout the day in Tri Counties' new branches, echo the bank's commitment to the communities it serves. Click here or on the image for a larger version. 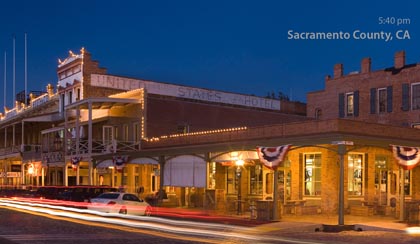 Click here or on the image for a larger version.

When it comes to branding a community bank, telling an authentic story one deeply rooted in the bank's cultural and geographical setting--is more effective than touting a litany of financial-services offerings. That was the lesson Tri Counties Bank learned in the course of launching a new prototype branch in the bank's headquarters town of Chico, Calif.

The branch, and now five additional redesigned branches, features a visually rich digital presentation themed around "a day in the life" of the bank's bucolic Northern California home territory. (Tri Counties has 41 traditional branch locations and 26 in-store branch locations in 24 California counties.) The presentation unfolds on what amounts to a digital wall--a matrix of four contiguous 46-inch digital screens composing a total visual area of seven by four feet--prominently displayed in the branch.

Customers in the bank lobby see the story of their hometown and geographical region unfold in a series of images and short writings that entertains and engages them while they wait to do business. The story proceeds in a series of color images depicting the local landscape and townscape, celebrations and seasons, local businesses in action, and bank customers at work and play, all captioned with the setting and time of day to capture the unique quality of life within the bank's Northern California footprint.

The sequence contains more than 1,600 images and unfolds for 13 hours without repetition, so that the "day in the life" show literally coincides with a day in the life of the particular bank branch. 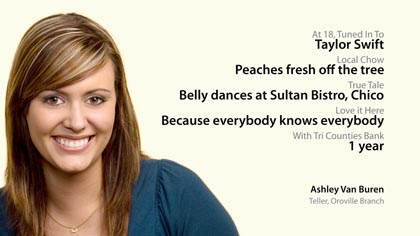 The digital wall in action in Tri Counties Bank's new Chico, Calif., prototype branch. On the screen is one of many mini biographies of bank employees that underscores the "We are you" message. Click here or on the image for larger version. 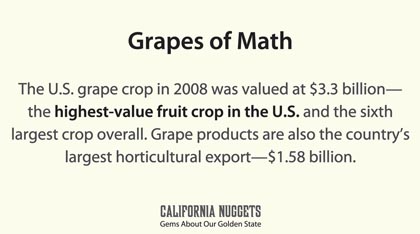 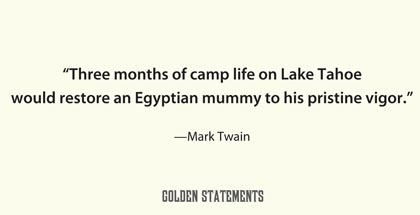 Click here or on the image for larger version.

Each presentation also weaves in historical photos of the region's colorful past; written nuggets of local lore and historical tidbits; entertaining quotes from eminent citizens; bits of pecuniary humor; and portraits of bank employees and executives.

Each of the portraits is enlivened by a bullet-point biography that tells a story of each employee's interests and affection for their home territory.

"We are you" is the subtextual message of the warmly presented portraits. Tri Counties also intersperses ads and bank messaging, but does so without the unrelenting commercial emphasis typical of digital presentations in retail spaces.

Genesis of the digital mission

The genesis of the bank's "day in the life" concept was an early discussion with Menemsha, the architectural firm hired to design the new branch. In order to propose architectural solutions for the bank, Reza Hadaegh, Menemsha's vice-president of architecture and national director of design, first needed to gain a sense of the bank's business culture.

Hadaegh asked the Tri Counties marketing team what they considered to be their most significant asset.

"Our people," was the unhesitating answer.

"I've heard other businesses say that," recalls Hadaegh. "But with Tri Counties, it was totally genuine. Many Tri Counties employees literally grew up in the bank. They're deeply involved in community activities and charities, and they love where they live."

Hadaegh proposed telling the brand's story as one of people and community, and suggested that digital technology could deliver a personalized and engaging way to tell it. It could also provide a visual focal point. 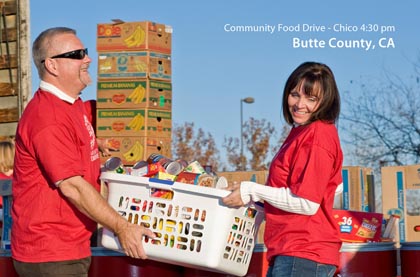 Among the "day in the life" images are portrayals of community life and charities. Click here or on the image for larger version.

"There was a lot of visual clutter in the bank," he says. "Their message was muddled. Posters and seasonal campaigns were plastered all over the walls. There needed to be a one-source arena for telling their story." Tri Counties Bank was immediately receptive. "We couldn't have done this without their openness and vision," says Hadaegh.

It didn't take much convincing. We were keen to reduce the visual clutter and to unveil its assets in a visually pleasing manner, recognizing that in-your-face product placement and staccato visuals would be out of place, given the bank's genuine community orientation.

Implementation of the concept and technology

The presentation has been well received and a cornerstone of the bank's branding and interior design approach. Menemsha carried the graphical element through to static aspects of the bank as well, with graphical walls in addition to the digital wall, and with large landscape images taken by local photographers. 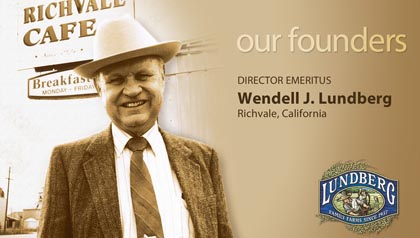 No stuffiness allowed: Portraits of the bank's founders show them as real community members in real community settings. Tri Counties Bank tapped local archives to add historical flavor to its digital wall presentation. Click here or on the image for larger version.

The bank's customers have responded positively. They enjoy seeing reflections of their own community, the places where they work and play. The bank's visual story becomes their own story, as they respond to images with "Hey, I know where that is!"

Subliminally, the bank's primary message is reinforced throughout the day: "We're a community bank. We value our people and we value our community. We are you."

What began as an architectural project became a brand clarification for Tri Counties. A branch makeover became a learning experience. The takeaway lesson: Customers would rather be engaged than pitched. At the same time, an engaged customer is a happy customer. Telling a genuine story is a means to driving genuine brand loyalty. 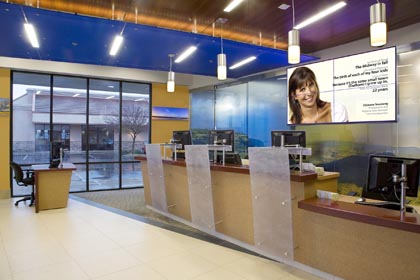 The digital wall at work in one of Tri Counties Bank’s newly designed branches. Click here or on the image for a larger version.

By Christian Burke, creative services manager, Tri Counties Bank, $2.5 billion-assets, Chico, Calif. Burke. This article is based on the presentation Burke will make in February 2013 at Digital Signage Expo 2013, "Using Digital Signage To Connect A Bank With Its Community."