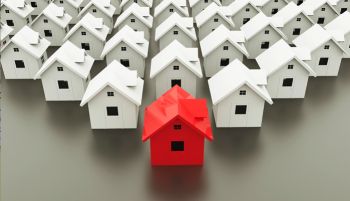 As news of pending settlements related to legacy mortgage-backed securities still leads headlines, lenders in the second quarter decreased representation and warranty reserves held for one-to-four-family mortgages, continuing a downward trend from a recent peak for the figure in the 2012 fourth quarter.

Overall, bank holding companies and savings and loan holding companies held $24.06 billion in such reserves at June 30, down from $25.19 billion at March 31. Both figures were down noticeably from the $30.33 billion held at year-end 2012.

Bank of America Corp. drove much of the 2012 fourth-quarter spike, with its representation and warranty reserves jumping nearly $3 billion quarter over quarter to $19.02 billion in the 2012 fourth quarter. In the first quarter, the figure declined to $14.08 billion, and it was nearly identical in the second quarter at $14.02 billion.

Also contributing to the fourth-quarter peak was General Electric Capital Corp. starting to file as a bank holding company, reporting $632.8 million in reserves, that quarter. By the close of the second quarter, the firm had increased its reserves to $787.2 million.

The biggest bank holding companies were among the group's leaders in second-quarter reserves declines. Citigroup Inc. led the way, as its reserves fell $696.0 million to $719.0 million in the second quarter. JPMorgan Chase & Co.'s reserves dipped $198.0 million, and Wells Fargo & Co.'s reserves fell $105.0 million. By total size of reserves, Bank of America's $14 billion was far and away the industry's highest, followed by JPMorgan's $2.48 billion in the second quarter.

Not all companies drew down their representation and warranty reserves in the second quarter. Capital One Financial Corp. posted the largest second-quarter increase in reserves at $161.3 million, bringing its total to $1.16 billion. News emerged in early July that a trustee filed suit against former Capital One subsidiary GreenPoint Mortgage Funding Inc., demanding buybacks after losses on MBS totaled $400 million. 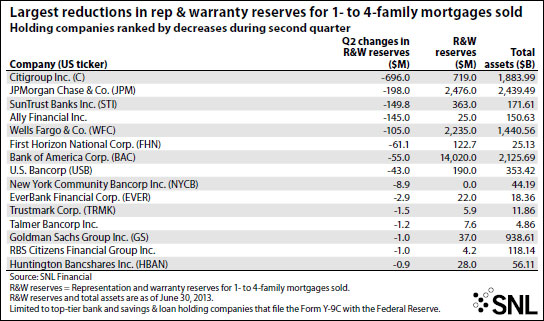 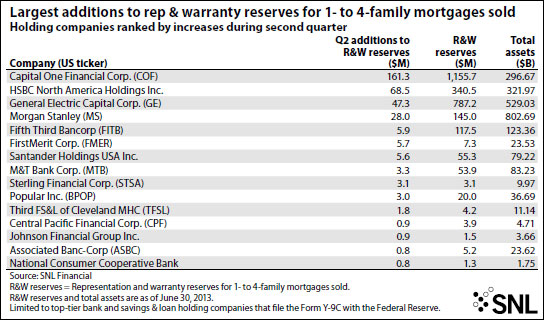