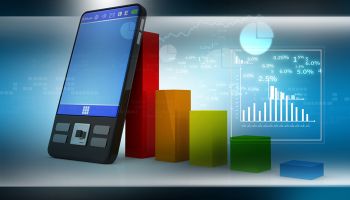 In a sign that U.S. consumers are continuing their growing embrace of mobile banking, a survey conducted at the end of 2013 shows that 60% of smartphone or tablet owners who switched primary banks reported mobile banking capabilities as “important” or “extremely important” in their decision to switch, up dramatically from 48% in a similar survey in the first half of 2013.

In parallel, as consumer adoption of mobile banking grows, the consumer’s use of higher-cost banking channels, such as traditional branch service and live customer-service call centers, appears to be declining. According to the study, mobile-banking users reported visiting a bank branch 39% fewer times per month after adopting mobile banking services.

“The behavior and decision-making of consumers who have adopted mobile is making the business case for mobile innovation and promotion by financial-services institutions,” says Hedges.

Consumer engagement with smartphones and other digital channels cannot be ignored, and appears to be fundamentally altering the U.S. financial services sales and servicing paradigms, says the study. Development of new mobile capabilities will likely help attract new digitally-oriented consumers to financial services companies, and a commitment to innovation on behalf of the consumer’s needs and preferences will be required to build the financial services franchises of the future.

“Mobile is now mainstream. It is table stakes for being relevant to consumers,” says Teresa Epperson, managing director in the Financial Services Practice at AlixPartners.

Spotlighting the importance of innovation, mobile remote deposit capture (RDC) adoption is growing steadily among the banked population as more banks roll out mobile deposit-taking capabilities. Across smartphone or tablet owners of all ages, according to the study, RDC adoption is growing fast, now up to 22%, from 18% in AlixPartners’ survey in early 2013. The largest group of RDC adopters tend to be younger and wealthier, and to use more of the products available at their primary bank than non-adopters.

“We will increasingly see banks developing and rolling out capabilities aimed at addressing specific consumer pain points and opportunities to add value. If mobile RDC is viewed as the current ‘big attraction’ in the ongoing wave of industry innovations on behalf of consumers, mobile photo bill pay could be the next big thing,” says Epperson. “In the fourth quarter of 2013, 28% of consumers in our survey between the ages of 26 and 34 reported themselves to be likely to change banks to gain access to mobile photo bill pay.”