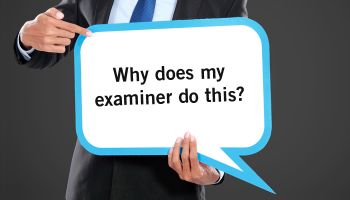 a. The examiner thinks would be “good to do”?

b. The examiner says you should be doing?

c. The examiner says you’d better be doing—or he’s going to smack you with some paper?

The answer really hinges on what that “something” is, but questions and comments at an FDIC breakout meeting during ABA’s Government Relations Summit in March indicated that there’s disconnect between what at least some bankers believe and insist that examiners expect, versus what Washington says is the case.

A definitive answer to this question from a top FDIC official was just one of the insights gained during the breakout.

Of regulations, guidances, and “best practices”

Two bankers asked about the difference between regulations and other expectations from examiners. One banker told the FDIC panelists that examiners should stick to regulations and stop bringing up guidances and best practices. Another banker said that in his experience best practices wound up being requirements that his examiners hewed to and expected the bank to adhere to.

Doreen Eberley, FDIC’s director of risk management supervision, took both questions and gave a definitive answer to how she says matters are supposed to work:

• First, regulations are something banks are expected to comply with and noncompliance is enforceable.

• Third, best practices are procedures and approaches that certain banking institutions use. They may represent strong ways to go about meeting a particular challenge, but performing them is not a regulatory expectation, Eberley insisted. One of the bankers had said that in his experience a best practice was non-negotiable, and demanded by his examiners.

Eberley seemed surprised that the banker had this impression about best practices. She said that she has found that examiners—exposed as they are to numerous banks’ approaches to common banking issues—often get asked for best practices by the banks they examine.

While she said that she’s been told that bankers value having such information, Eberley insisted that “we don’t examine for best practices.” She indicated it was essential to differentiate between guidance and best practices.

This interchange illustrated the importance of something Eberley said had become a priority to the agency in the last few years: Better communication. Forums like the ABA Summit breakout help air messages and views from both regulator and regulated.

In opening statements, Eberley and her co-panelist, Mark Pearce, director of FDIC’s Division of Depositor and Consumer Protection, summarized some of the latest thinking on safety and soundness and compliance at the agency:

• Business continuity. Once called “disaster preparedness,” this special planning has evolved far beyond readiness to overcome a physical issue such as Superstorm Sandy, Eberley indicated. The advent of attacks such as the Target affair—and the Heartbleed virus that came to light after the Summit—make it clear that banks must be prepared for threats of any type and from any direction. Eberley noted that FDIC planned to send a cyber-challenge self-test to banks to use to see how they would fare.

• Vendor management. Eberley said that this continues to be a high priority for regulators. She told the bankers that more vendor management guidance would be published, and in early April FDIC re-issued three technology outsourcing  documents as a reminder to community banks.

• Compliance performance. As much angst as there has been in the compliance area, Pearce had some good news: 94% of banks examined for compliance by FDIC in the most recent period had received favorable ratings. “That’s a remarkable record,” said Pearce. He noted that during the crisis, that percentage had dropped—to 90%.

• De novo banks coming back? With one fairly recent exception, bank startups have been nil in recent years.

“We are absolutely open for business,” said Eberley, in terms of being willing to entertain new applications for deposit insurance. “There hasn’t been a lot of business, though, that we’ve heard about.” (FDIC grants deposit insurance coverage, but chartering is handled by state regulators and, for national banks, the Comptroller of the Currency.)

Eberley suggested that capital that might have gone to startups went into existing banks during the crisis and the post-crisis cleanup. She said that $40 billion in new capital came into banks under $1 billion—excepting some specialized institutions—between 2008 and 2012. It was simply cheaper for investors to buy into existing banks than to start from scratch. However, she suggested that as many community bank share prices are rising, de novo banking may appear attractive once more.

• Fair-lending. Pearce said that FDIC made 11 referrals to the Justice Department on fair-lending concerns in 2013. He said that the standard is if there is “reason to believe that there may be a pattern or practice of discrimination.”

He said this level of referral represents a very small portion of the 1,600+ compliance exams FDIC does annually.

As frequently happens during the dialog portion of regulatory breakouts at events like the Summit, when bankers come to the mikes they are as likely to make a strong statement rather than ask a question.

• Credit union competition. Several bankers spoke of the competition they face from credit unions, and they referred to inferior credit practices and unfair competitive advantages.

One banker said her credit union competitors’ credit standards had eroded so much that they were growing at a rate of 8%, while area banks were growing at only a quarter of that.

“I applaud you for not engaging in a race to the bottom,” said Eberley.

Another banker, based in a university town, said that a competitive credit union was offering this heavily transient population 100% loan-to-value mortgages.

Pearce acknowledged the concern, and said bank regulators shared it, but that some efforts to seek a level playing field are more successful than others. He suggested that perhaps the influence of the Consumer Financial Protection Bureau would help level the playing field, over time.

• Redefine the role of regulators? Former ABA Chairman and Nebraska community banker Matt Williams suggested that FDIC and other bank regulators come around to seeing themselves as allies to banks, rather than adversaries. He said he didn’t want to see regulation weakened, but instead for the agencies to support the industry when it goes up against factors than harm it—such as credit unions’ competitive advantages.

“We really need you to regulate strongly,” said Williams, president and chairman of Gothenburg State Bank, “but also to step up and become a better ally for us.”

By way of answer, Eberley pointed out that many regulatory burdens added by the Dodd-Frank Act contained “bright lines” intended to keep their impact away from community banks. She said that FDIC had respected that and emphasized to examiners that agency officials wanted to see no “trickle down” effect.

As an example, she noted that full-bank stress testing, imposed on the largest banks in several ways, does not apply to community financial institutions.

“We don’t expect community banks to do full-bank stress testing,” said Eberley, “and we mean it.”