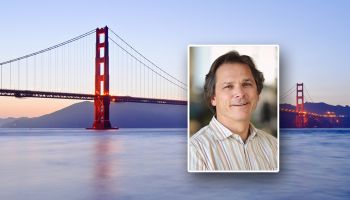 Steve Ellis’ technological epiphany came during a speech years ago at a payments conference. Scott McNealy, co-founder of Sun Microsystems, was speaking about what he saw as the banking industry’s digital future, about how nearly all financial assets essentially were data.

“In my head, all the lights went on,” says Ellis, executive vice-president and head of wholesale services for Wells Fargo. “I got internet religion.”

Ellis’ background is a little different from the average banker. He used to run a tavern. (He owned the Produce Row Café of Portland, Ore., as it says on his LinkedIn page.)

He also spent some time as a quant, after post-tavern graduate work.

That training led to his first job at Wells in 1987, as a financial forecaster, with time spent in Operations commercial banking, real estate finance, and wholesale banking, and then in Treasury Management. But once he got the bug at that conference, his career took a fresh direction.

Before long an internet product development team came together, which launched its first rollout in 2000. Wells was early in recognizing the potential the internet and all things digital. Among other things it was the first bank to introduce mobile commercial banking service, its CEO Mobile family of products introduced in 2007. The service is part of the bank’s CEO Portal (CEO stands for Commercial Electronic Office).

In his current position Ellis has thousands working for him, in a part of Wells that encompasses lines of business ranging from business lending to many kinds of processing to social media strategies. But a key interest is developing new technologies, especially banking technologies.

Under Ellis is the company’s Innovation, Research, and Development Team, led by Bipin Sahni, senior vice-president. This group and other parts of Ellis’ sphere often work with outside tech firms.

Wells’ headquarters in San Francisco isn’t far from Silicon Valley, prompting frequent visits to the bank by tech experts and entrepreneurs, and vice versa. Ellis says the bank has benefited from that.

“We like looking outside Wells for ideas,” says Ellis.

In August, Wells took its emphasis on cross-fertilization with outside tech partners to a new level. The company launched Startup Accelerator, an incubator for new technologies for the financial services industry.

Startup Accelerator has been designed to open Wells’ wallet—and base of knowledge, connections, and expertise—to promising young technology firms with ideas about financial services technology.

Firms accepted into the program will receive direct equity investments of between $50,000 and $500,000 from Wells. They will also become part of a “boot camp” for at least six months. Wells’ subject matter experts and purchasing managers will provide workshop-style training and one-on-one advice to winners, to go along with the cash stakes.

Among the facets of finance for which Wells is seeking innovations are payments, deposits, anti-fraud measures, and operations, though virtually any idea will at least be considered. The key measure: What would the proposed technology due to improve a bank client’s customer experience?

“The Startup Accelerator adds a new cylinder to our corporate innovation engine,” Ellis explains. “We’re taking a proven business model from the venture capital community and repurposing it as a strategy for connecting with start-ups whose ideas and growth prospects could add value to our business and our customers’.”

The program won’t have time limits per se, though the intent is that every six months progress will be reviewed and a fresh crop of applicants will be considered for the program. This year the application process ends on Oct. 1. Between 10 and 20 companies will receive aid annually. In late August, Wells had already received over 100 applications, many of them from other countries, according to Ellis.

Three firms have already been selected as pilot participants:

• EyeVerify, Kansas City, Kan., developed means to transform a picture of one’s eye into a key that protects digital assets. The firm’s EyeprintID uses eye vein characteristics as the basis of its technique. In everyday use, a quick “selfie” clears you to transact.

Even after making it through early stages of Wells’ application process, a potential Accelerator participant will need to find an interested backer in one of the bank’s business line units—a client representative, not “a techie,” according to Ellis. The bank wants to make sure that, impressive as a technology may be in the abstract, that it has a genuine commercial application.

Ellis says the payoff will be in the technology produced, not necessarily in a return on the bank’s equity investments. As for the investment, he explains, “if it works out, it works out.”

Is there any financially oriented application that Ellis wouldn’t find potentially appealing? He suggests—likely with tongue in cheek—that a 3D printing technology that could reproduce currency wouldn’t have much appeal, in spite of the currency of 3D printing.

But otherwise Wells intends to be very open minded. Proposals from firms seeking to join the Accelerator will be weighed by an internal committee composed of senior technology, venture banking, and innovation leaders within the organization.

While he oversees a great many technologists, Ellis resists being classified that way.

“Everyone thinks I’m a techie,” he says. He doesn’t consider himself such, though he is an all-Apple user, from his Mac to his iPad to his iPhone.

So, what would be his own technological Holy Grail? The app he’d most like to have?

It would involve no keyboard or touchscreen at all, he says—only his voice.

Ellis posits the need to transfer funds. He wants to be able to pick up his iPhone and talk to it, connecting to his bank.

In his vision, by the time he states his request, technology will have recognized his voice, authenticated it, and connected to all his accounts.

By the end of his sentence, the technology of his dreams will have interpreted what he wants done, how much he wants moved, to whom, and to what account and from which account.

By the time he disconnects, the money has moved.

Sharing technology with other banks?

Ellis says that no exclusivity is expected for Wells of any new financial technology or functionality that comes out of Accelerator participants. Of course, if Wells really likes the fit to its organization of a new technology, he says, the bank would want to be the fledgling company’s first customer. But he adds that financial services companies share sufficient common interests that sometimes spreading a new technology around would be best for all players.

“Let’s say we can produce something really great about security,” says Ellis. The more banks that have it, the more the bad guys are thwarted. And that is going to be good, he says, for all banks.