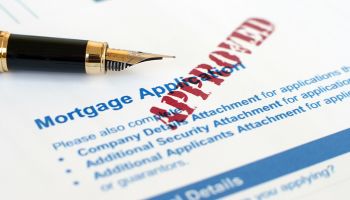 Most U.S. metropolitan areas saw mortgage activity decline in 2013 relative to the previous year, but there were some cities that posted gains.

The latest data from the Home Mortgage Disclosure Act, released Sept. 22 and representative of lending activity through year-end 2013, showed widespread declines in mortgage activity. Out of the 929 metro areas with available data, 702 metro areas posted year-over-year declines in funded loans. Overall, funded loans totaled $1.90 trillion in the U.S. in 2013, down 10.7% from $2.13 trillion of funded loans in 2012.

Some metro areas were able to post year-over-year gains in mortgage activity, particularly cities benefitting from a natural gas and oil boom. 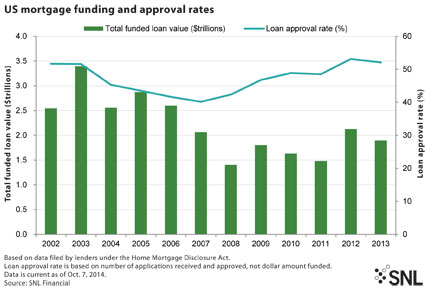 The top market for year-over-year loan growth was Uvalde, Texas, with funded loan activity leaping 63.1% year over year. Natural resources account for 15.8% of the city's jobs, compared to a national share of 9.3%, according to the Census Bureau's American Community Survey's 2012 five-year estimate.

And Williston, N.D., a media favorite to represent the effects of the natural gas boom, was in the top five of metros for year-over-year lending activity with 45.1% growth. Natural resources account for 18.2% of the city's jobs.

"It's just more jobs and increasing the number of people with money who can buy homes or refinance. And to some extent, that's probably one of the only growing industries we have in this country at this point," said Guy Cecala, CEO of Inside Mortgage Finance.

Texas metro areas had a strong presence at the top of the overall metro list, which is dominated by smaller towns. Among the top 20 metro areas for year-over-year funded loan growth, 10 are in Texas. And towns with strong natural resources industry dominate the top 10; aside from Adjuntas, Puerto Rico, in the No. 3 spot, all metro areas in the top 10 are in Texas, Oklahoma, North Dakota, or Montana.

Beyond areas brimming with natural resources, some metro areas that had seen housing activity fall the furthest have bounced the highest, and vice versa. After topping the 2012 list of metros for year-over-year growth in mortgage activity, Las Vegas, N.M., was dead-last among the 929 metro areas with available data, as its funded loan activity tumbled 64.3%.

What goes down, must come up?

At the other end of the spectrum, several Florida metros were high on the list, apparently leading the housing recovery just as they were among the first areas to crash.

Among the 80 metro areas with available data and at least 20,000 funded loans in 2013, Florida had four metropolitan areas in the top 10:

• Miami-Fort Lauderdale-West Palm Beach at No. 2.

•  Tampa-St. Petersburg-Clearwater at No. 6.

The only other state with more than one metro in the top 10 was oil-rich Texas, with Houston-The Woodlands-Sugar Land taking the top spot with 11.6% year-over-year growth in funded loans, more than double Miami's second-place growth of 5.5%. 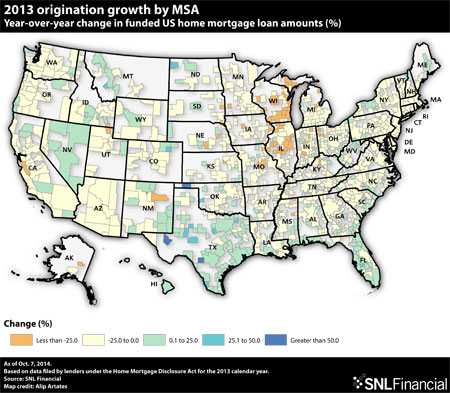 A closer look at Florida

Breaking down the funded loan totals by type, it is apparent that Houston and Miami suffered from the beginning of the end of the refi boom, with both metro areas posting year-over-year declines in refinanced loans. However, both markets enjoyed year-over-year gains in home purchase loans that more than made up for the decline.

Brad O'Connor, research economist for the Florida Association of Realtors, said the fact that Florida metros had fallen further than most of the nation has accelerated the recovery.

"Once the uncertainty regarding whether our economy was really going to recover started to bleed away some in the last couple years, I think that really encouraged a lot of people here to start buying again," O'Connor said.

He told SNL that Florida particularly benefitted from its status as a top retiree market, as well as a luxury market for high net worth individuals interested in a second home.

"Those are some of the markets that were the quickest to recover because the stock market was the first part of the economy to recover," O'Connor said.

Further, Florida markets have attracted some institutional investors, hoping to make a play in the burgeoning single-family rental market. Looking forward, however, the role of investors has started to diminish, with the share of all-cash sales dipping to 38.6% of total sales in August 2014, from a recent peak of 48.9% in January, according to data from the Florida Realtors.

O'Connor said the investor exits, coupled with sellers feeling more comfortable about listing their properties, have brought about a slight pullback in price appreciation. However, with the state still at 5.5 months of inventory at the current sales rate and economists generally considering 6 months of supply to be a balanced market, O'Connor said a significant decline in prices does not appear likely.