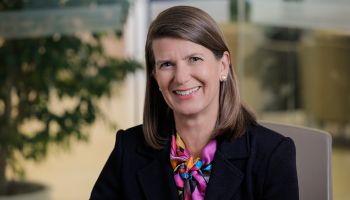 Silicon Valley has changed a good deal since Lee Merkle-Raymond first arrived there as a banker from the East Coast in the 1990s.

Technology, itself, has changed dramatically, says Merkle-Raymond, who recently joined Bank of the West as commercial regional manager and leader of the company’s mid-cap technology teams. Back in the 1990s, she notes, semiconductors were 4-inch wide wafers with data pathways measured in microns. Now the devices are 12” wide and pack so much on that measurements are made in nanometers—a billionth of a meter, versus the micron’s one thousandth.

The nature of Silicon Valley companies themselves has drastically changed as well, says Merkle-Raymond. A tremendous amount of strategic consolidation has taken place, changing the scope of many clients and potential clients.

Merkle-Raymond points to disk drives as an example. The numerous components that go into this essential peripheral formerly came from multiple independent suppliers. Now disk drive makers own their supply chains.

Even more dramatic has been the evolution of the internet. When she first came to the Valley, she reflects, it was the Netscape Age (remember that on-ramp/browser?). Today, a growing number of companies use “the cloud” for the bulk of their software and processing.

“That wasn’t even envisioned 25 years ago,” says Merkle-Raymond.

Successfully approaching high-tech prospects and serving high-tech clients requires a number of specialized capabilities, according to the banker.

One is understanding the nature of the industry. While “high-tech” is often used to describe the business in a unitary way, Merkle-Raymond explains that this sector actually consists of many smaller sectors, and that their fortunes don’t necessarily all rise and fall with the same conditions. This diversity gives high-tech lenders less industrial concentration than an outsider might perceive.

Thus, while regulators, especially the Comptroller’s Office, have expressed concerns about concentrations, Merkle-Raymond says that’s not as much a factor for her teams as it typically is for lenders specializing in commodity-based busineses such as oil and gas. Further, Bank of the West does not bank high-tech firms highly dependent on consumer technology. That sector tends to have the greatest volatility, she explains, so the bank concentrates on companies serving businesses’ needs.

Merkle-Raymond adds that business models vary widely in the Valley, so that even companies in a given slice may not be affected in the same way by market developments.

There are some commonalities to the way Bank of the West looks at high-tech companies.

Ongoing cash flow is an important factor when evaluating a high-tech firm’s creditworthiness, she explains. However, while much of what these firms do is somewhat abstract compared to a conventional manufacturing firm or other “physical” company, she adds that it is not as if there were no collateral in high-tech lending.

Merkle-Raymond explains that high-tech firms hold many intellectual assets—patents and more—that can have significant value to a lender going into a loan, and when attempting to clean up a loan gone bad. In fact, there are valuation companies that specialize in essentially performing appraisals on intellectual property.

Another key aspect of understanding a high-tech customer, says Merkle-Raymond, is appreciating where it stands in its life-cycle. Her group’s target client has annual revenues of $25 million or more, which means you won’t find the bank vying with Kickstarter.

But more important to serving the tech sector, says Merkle-Raymond, is understanding how such companies expand. She explains that tech companies go international more quickly than non-tech companies do. This creates an earlier need than otherwise for a financial partner that can assist with overseas financing and foreign currency transactions. Bank of the West makes increasing use of its ownership by BNP Paribas, the Paris-based universal bank.

Still about the R word

In the course of her interview with Banking Exchange, Merkle-Raymond pointed out that high-tech is no new activity for Bank of the West: The company already has over $1 billion in tech sector exposure already.

And one thing she and the bank’s staff has learned is that for all the technology coming out of Silicon Valley, the face-to-face business meeting between banker and borrower or prospect hasn’t gone extinct.

There may be a bit more video conferencing is this part of the world, says Merkle-Raymond, but plenty of business still starts and ends with a physical handshake, not a tweet. Getting to know a company and its executives at the ground level helps even a high-tech lender to better serve that firm, and to leverage the bank’s relationship.

“I think there is still a lot to be said,” says Merkle-Raymond, “for meeting face-to-face with your client.”