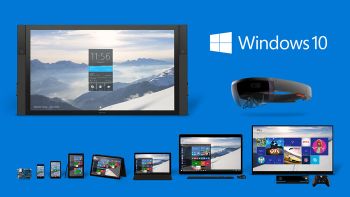 Bankers who reacted to Windows 8 with howls of incredulity can take heart: Microsoft is bending over backwards with its next Windows release to win back the mouse-and-keyboard crowd.

Yes, it’s true: With Windows 10 (there will be no Windows 9), due for release July 29, Microsoft will make it simple once again to navigate the operating system with a keyboard and mouse.

“This move is a plus for the banking industry,” says Tommy Bradford, managing director, Jack Henry & Associates. “Microsoft received the message loud and clear from the billion-plus Enterprise Windows users—of which the banking industry is a part—that the Windows 8 modern look was interesting, but was not practical for commercial use.”

The “Redmond Goliath” will bring back other features—like the Start Menu—that were sorely missed. “It’s a practical approach, which is customer first,” says Satya Nadella, CEO, Microsoft.

Officially unveiled with great fanfare by Microsoft in January, Windows 10 is both an entirely new product and, at another level, an apology to millions of PC users, who were relegated to after-thought status when Microsoft rolled out Windows 8 a few years ago.

Back then, Microsoft bet big that it could abandon traditional Windows computing. Its plan: literally strong-arm Windows users into adopting a completely reconfigured user interface driven by touch-screen controls.

Chastened, the company has responded with a completely reconfigured operating system that brings back many of the cherished features of earlier versions—pre-touch screen—while incorporating some tasty new additions.

Microsoft spent two hours at its Windows 10 rollout to describe the program’s features. Here are some of the most significant changes that bankers should know about:

• The Windows start menu has returned to the left side of the PC screen.  Once again, you are able to call up an ordered list of programs on your desktop that you can click on with your mouse and open instantly.

Three-quarters of the desktop to the right still offers the touch screen-tile access to programs that Microsoft wanted everyone to embrace with Windows 8. But you can simply ignore those—or slowly integrate those tiles into your work style at your leisure.

• Your PC boots straight to the desktop. Perhaps most infuriating about Windows 8 was Microsoft’s insistence that a PC boot directly to a touch screen-tile interface that, initially, no one understood.

Not so with Windows 10. Once again, your PC now starts with the familiar desktop interface made popular in previous, keyboard and mouse-friendly versions of the operating system.

• Your tablet automatically senses your preference for traditional or touch screen controls. With Windows 10, tablets will be auto-programmed to sense when a keyboard is plugged in and then automatically switch to the desktop mode—the mode that’s optimized for use with a keyboard and mouse.

If you disconnect your keyboard, Windows 10 will politely ask you if you’d like to switch to touch screen control.

“For someone who’s a mobile task worker, it works like a tablet while you’re out and about, and then it works exactly like a PC when you bring it back and dock it,” says Joe Belfiore, vice-president, operating systems group, Microsoft.

Pravin Vazirani, assistant vice-president of software company Chetu, sees the new feature as a great perk for bankers: “This will be a definite plus for [the] banking industry that uses both desktop-based workstations and smartphones or tablets for mobile assistance on the floor.”

Says Michael Matuszak, a senior vice-president and technology director at First Niagara Financial Group: “This move by Microsoft will lower the impact on banks looking to replace Windows 7 or 8.1.”

• Windows 10 offers an attractive alternative for the “you’ll have to pry it from my cold, dead hands” Windows XP diehards. Sure, Windows XP was a great operating system. But its time—and ability to give banks a secure operating environment—has passed.

“I would advise any of my peers to move as fast as they can away from Windows XP for security and support reasons,” says Bank of the West’s Lamb.

If that isn’t strong enough, Dan Larlee, chief technology officer for D+H, says,  “No financial institution should still be using Windows XP for anything if it is connected to a network.”

Talk to me, Cortana

Besides bringing back most of the features that made earlier incarnations of Windows so popular, Microsoft also is sprinkling in some cool new additions that could make Windows 10 an even bigger hit.

Windows 10, for example, comes with a search-engine-powered, new voice assistant, Cortana. Already available on Windows phones, Cortana will sit atop the Windows 10 interface and answer your queries with the help of Microsoft’s Bing search engine.

You can ask Cortana—using natural language or your keyboard—what the weather will be like tomorrow; where that elusive document file you lost is stored; how long until your next meeting; and similar queries.

Like many things computer these days, Cortana is turbocharged with advanced analytics. So theoretically, Cortana will get to know you better over time as it chews over questions you’ve already asked, and provides you with evermore accurate answers the more you consult with “her.”

Another useful Cortana feature: You’ll be able to dictate emails or texts to her, and have her send those communications to the person or people of your choice.

A notable feature of Microsoft Edge is just that—it enables the user to write or type on web pages and share those annotations with others. Another bonus with Edge is that it comes equipped with a clipping tool that enables you to clip and save portions of websites to OneNote, Microsoft’s free, content-archiving program.

You also will be able to use Edge to save web content that you can read offline at your leisure. And Microsoft promises the ability to display web content free of “distractions.”

A major change with the new Windows is that it’s being built on the promise that all Microsoft-friendly products will share the same, common Windows 10 operating system—desktops, laptops, tablets, phones, and even Xbox. (As reflected in the Microsoft photo accompanying this article.)

If it works out as promised, this will make it easier for you to make simultaneous changes that will pop up on all devices. Update a contact in Outlook, for example, and that contact will be updated on all your Windows 10 devices. Upload your music to Microsoft cloud service OneDrive and that music will play on all your Windows devices (not that you would listen at the bank, of course).

“As more and more of these universal Windows apps begin to appear,” Larlee continues, “financial institutions will want to be ready to capitalize on them without changing the user’s overall experience with their existing applications on their existing laptops and desktops.”

Scott Hess, vice-president, user experience, digital channels, for Fiserv, agrees, and adds: “The ability for fintech vendors and banks to write one app to run across users’ desktops, smartphones, and tablets universally is a huge time and cost savings.”

Equally ground shifting with Windows 10 is Microsoft’s decision to repackage the operating system as a “service”—as opposed to a static product. This means that instead of releasing Windows updates every few years, Microsoft plans to continually update the program with enhancements that automatically download from the Web to your PC.

“Once a device is updated to Windows 10, we will be keeping it current for the supported lifetime of the device,” says Terry Myerson, executive vice-president, operating systems group, at Microsoft. Soon, the question, “What version are you running?” will no longer apply to Windows, Myerson says.

One exception: Windows business Enterprise users will be able to opt for a “go slow” update approach to Windows 10, enabling them to delay quick, across-the-board, automatic updates to Windows. Instead, these users will be able to opt for automatic updates involving security or other critical changes, and get time to test and evaluate the impact of other updates, according to Jim Alkove, director of program management, enterprise group, at Microsoft.

Probably the sexiest new addition to Windows will be its built-in ability to play three-dimensional/holographic content created by a new software product Microsoft promises to roll out later this year: Microsoft HoloStudio.

All told, Microsoft’s move with Windows 10 could, in fact, reverse the misstep it made with Windows 8. Indeed, the company is now so ostensibly committed to responding to user feedback, it created a special Windows Insider program for Windows users who wanted a voice.

People who joined Windows Insider got to test beta versions of Windows 10 before the operating system’s release. As the July 29 release grew nearer, Microsoft advised on the insider website that, “We’re very close to the public release of Windows 10 so we’re not onboarding any new PCs to the Windows Insider Program just now. You can still register and start using Windows 10 Mobile Insider Preview, and we’ll let you know as soon as there’s a new Insider Preview build for you to try on your PC.”

Joe Dysart is a journalist with 20 years experience whose articles have appeared in more than 40 publications, including The New York Times and the Financial Times of London.