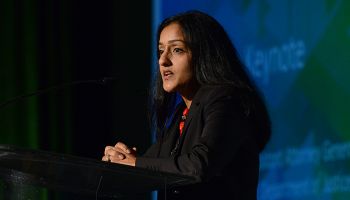 Justice Department official Vanita Gupta made it clear in a recent speech that fair-lending cases remain a top federal enforcement target. Justice now receives the most referrals from the Consumer Financial Protection Bureau.

Bankers may not have felt that fair-lending issues and settlements have a connection to broader matters of civil unrest and controversies over use of police powers. But Vanita Gupta, acting head of the U.S. Justice Department Civil Rights Division and principal deputy assistant attorney general left no doubt regarding her perception and that of the Justice Department during a speech opening the Wolters Kluwer CRA & Fair Lending Colloquium on Nov. 2.

Gupta heads the part of Justice that handles fair-lending cases, resulting both from banking regulators’ referrals and a more recent effort by the division to find cases on its own. The Hudson City Savings Bank case, pursued in conjunction with the Consumer Financial Protection Bureau, is one of the latest examples.

Gupta, known as a strong litigator, worked for the National Association for the Advancement of Colored People, prior to joining the Justice Department.

The official noted she has been in her post for a year and said that it has been “rather intense and active.”

“High-profile incidents across the country have thrust us into a national dialogue over the use of excessive force, racial profiling and stereotyping, officer and public safety and a festering lack of trust between police departments and the communities they service, particularly low-income communities of color,” said Gupta.

“But underneath so much of the unrest that we’ve seen in Ferguson, Missouri; Baltimore; New York; and cities across America," she said, "lies a foundation of systemic inequalities and discriminatory biases, built up over decades, not days."

She specifically pointed to lack of credit in affected communities as a root cause of this year’s troubles.

“To break down barriers to opportunity we must protect the rights of people to borrow money without bias or discrimination,” said Gupta. “Discrimination is a multiplying force. It can have a devastating domino effect on a person’s future economic prospects. And that is why equal access to credit is a fundamental part of our work. Credit provides the means for families to own a home, to buy cars so they can get to work, and to increase their earnings so they can invest in their own future.”

In its efforts to fight discrimination and to adjust for the impact of past alleged discrimination, the Justice Department has gone so far, in the Hudson City Savings case, to negotiate the establishment of new branches where they hadn’t been provided before. This goes beyond the large monetary aspects of recent settlements. (See page 10, Section E, “Physical Expansion of Black and Hispanic Neighborhoods,” of the DOJ consent order.)

“Whether mandating that a bank open a branch in a neighborhood neglected for years or requiring an auto lender to limit the discretion of its dealers, we recognize the value of resolutions that extend beyond the distribution of dollars,” said Gupta.

Since 2010 the civil rights division has settled more than 40 suits alleging discrimination in mortgage lending, resulting in over $1.3 billion in relief for affected individuals and communities. Grounds for the cases have included pricing discrimination, steering, and redlining.

Gupta told bankers attending the colloquium that DOJ has 25 open fair-lending investigations of various types and five authorized fair-lending lawsuits in the pipeline.

Gupta said her division “will continue to prioritize … enforcement of our fair lending laws.” She noted that in this year’s Inclusive Communities decision, handed down in late June, the Supreme Court supported the Justice Department’s position that the Fair Housing Act authorizes the department’s long-controversial “disparate impact” claims.

Staying out of trouble

The Justice official gave advice both broad and specific about avoiding fair lending difficulties with the government.

Broadly, she said that “the settlements that we seek do not ask lenders to engage in risky lending or ignore the creditworthiness of potential borrowers. The law sets a simple but clear demand: provide equal access to credit.” The Justice Department sees maintaining or adding branches in minority neighborhoods as part of that effort.

• Adopt nondiscriminatory lending policies and procedures, “while critically reviewing those already in place.”

• Scrutinize “the discretionary practices that you authorize your brokers and dealers to engage in.”

• Take steps “to remedy any discrimination you uncover.”

Gupta said that both redlining and “reverse redlining” cases would be a priority. The former refers to alleged discrimination through not serving borrowers in minority areas, whereas the latter implies a targeting of individuals in such areas for discriminatory treatment.

In addition, Gupta said that enforcement of the Servicemembers Civil Relief Act would be another divisional priority.

“We, as a nation, cannot allow the men and women who defend our freedom with extraordinary personal sacrifice to return to civilian life only to find their debt burden skyrocketing, their homes foreclosed, or their cars repossessed,” said Gupta.

An area full of detail and nuance

The colloquium, hosted by Wolters Kluwer Financial Services, and sponsored by the American Bankers Association, the Independent Community Bankers of America, and Community Capital Management, drew nearly 700 bankers, regulators, and others interested in CRA and fair-lending issues. The four-day meeting included numerous panels of bankers, regulators, prosecutors, and compliance experts.

Several sessions later in the program built on the points Gupta made in her opening-day speech. Some of these will be covered in subsequent articles on www.BankingExchange.com. Most sessions drilled deep into policy and procedural matters, including some sessions delving into the new Home Mortgage Disclosure Act reporting requirements. The number of fields banks must gather data for has doubled under CFPB regulations, reflecting both Dodd-Frank Act stipulations and additional data points deemed necessary by the bureau.

Banking Exchange tweeted frequently from the colloquium. You can read many of the tweets in our Twitter timeline or on the hashtag page #CRAcolloquium