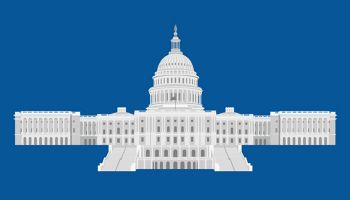 What can bankers expect out of Washington next year?

In a nutshell, a Congress mostly distracted by the elections, and regulators steadily moving to wrap up more pending regulations.

Community banks will continue to enjoy a relatively positive image, with very large banks, out of favor, being nudged to shrink. Marketplace lenders may still defy political gravity as regulatory officials pay more attention to traditional lenders, though that attention may shrink the base of buyers for marketplace credit made on online platforms.

And, anxious to not be seen as napping as some new credit problem sprouts, regulators are expected to pressure banks of all sizes on credit quality, notably on loan classifications.

These are among the predictions made by Brian Gardner and Michael Michaud of Keefe Bruyette & Woods in their 2016 Washington Outlook: Washington Still Sees Banks As Bad To The Bone.

Regarding Congress, the authors stated that:

“Conventional wisdom seems correct—Congress, consumed with gridlock and in the final year of the Obama Administration, will likely produce little legislatively other than meeting deadlines for legislation that must pass. Other than possibly passing a version of the Shelby bill in the early part of 2016, we doubt Congress will pass any legislation of consequence for the financial services sector.”

Of the Washington atmosphere in general, the authors said that community banks and regional banks have some political capital to work with in Washington, but “for the biggest banks, we believe the pendulum is stuck on one side of the amplitude.”

There will be few political victories in any quarter in Washington for the largest banks, they said, and in some cases matters may grow tougher. One example of the latter: The possibility that the Comprehensive Capital Analysis and Review stress test will be stiffened for global systemically important banks (G-SIBs).

Also this warning: “We reiterate a view that we have espoused since Congress passed Dodd-Frank—the regulators want the big banks to shrink. We do not expect the regulators will directly intervene and force big banks to break up, but we continue to see signs that regulators are capping returns that the G-SIBs can pay to shareholders and forcing banks to simplify their structures. We think this continues to build pressure where banks’ only option to increase their return on equity is to divest assets.”

The Shelby legislation would ease conditions on regional banks somewhat, the report pointed out, and because those institutions aren’t seen as villains by the public, the bill may have a shot.

Beyond the big picture trends among the prudential regulators highlighted above, the KBW report dwelt most on the work of the Consumer Financial Protection Board.

Interestingly, while the Treasury Department has concentrated most publically on marketplace lenders, there is little it can do directly to regulate the business. The report points out that CFPB has given no signals that it intends to get involved in that space.

“In short, we think investors’ concerns about the regulatory risk to the industry are overblown,” the report says. “We continue to look to the states to see how they regulate the sector. At the federal level we think it will be months before the CFPB acts and such action may not even occur until after 2016.”

Prudential banking regulators’ attitude toward marketplace lending may be more important, the report indicated. FDIC has issued a supervisory letter stressing that banks buying loans from marketplace lenders must underwrite them as if the bank was making the loans directly.

As predicted by the authors, CFPB will have much to keep itself busy, potentially closing some loops that have been open for some time. Among these are regulations that would affect payday lending and overdraft services.