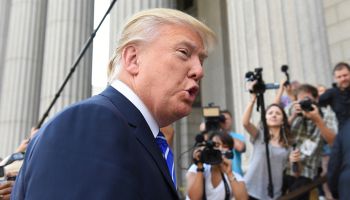 It’s very difficult this primary season to figure out what the candidates are telling us. Certainly, we think or say, “They can’t be serious.” And this goes for the pundits too.

Let’s take a banker’s-eye view of the campaign thus far.

For all my working life and to an increasing degree as I have grown older, I am reluctant to share my financial statement with anyone. (Frankly, I don’t want anyone to really know how long I’ve worked and how little I have to show for it.)

Could that be the issue with Donald Trump? Did Mitt Romney imply nearly as much last week when he hinted at the likelihood of a “bombshell” in Trump’s tax returns?

I frankly take Trump at face value on his reluctance to release his tax returns in the course of an audit. One can only imagine what the mavens of finance, those who opine regularly and often in the “comments” section of articles in major newspapers, usually in acerbic and derisive terms, will say about the numbers, whatever they show.

And what about unsolicited comments from among the genuine tax experts?  Shouldn’t we expect them to have a field day opining on and second-guessing the activities of Donald Trump’s tax counsel?

No, in his shoes, I would not release any information on my taxes (or net worth) until that particular period of time is no longer under active review and could become an actual or potential political issue. That’s just common sense.

I suspect though that one such as Sen. Marco Rubio falls more in my league of financial “stoutness.” Nice-sounding title but not a whole lot of substance to the bank account. As we say in Texas, “Big hat, no cattle.”

Here’s one paradox. An act of caution and prudence in one’s personal financial affairs becomes a political football to the pundits and armchair critics of the candidate—any candidate—who resists the clamor for immediate gratification of the critics and commentators.

Does that make sense?

Perhaps a way to view all or much of this is to give it the label of “meddling.”  In that sense, consider some candidates’ calls for audits of the Federal Reserve System and for pre-determined rules-based criteria for the conduct of monetary policy. We’ve heard that sort of language from current and former candidates of both parties.

I’m sure that most of us thought that the legislation of 1913 establishing the Federal Reserve System had deliberately carved out the independence of the Federal Reserve from political forces that could disrupt the orderly conduct of this nation’s monetary affairs.

Such assaults on Fed independence are not new. But note now how persistent they have again become.

Look at how Congress is dealing with financing our national infrastructure. Last month there was a “one-time” raid on the contributed surplus of the Federal Reserve and the diversion of an estimated $17 billion of future Federal Reserve dividend payments to banks in excess of $10 billion in assets.

To be sure, we need to invest in infrastructure. Yet the fuel economy of the nation’s fleet of autos and trucks has improved over the years and the dedicated revenue from the federal fuel tax has not been sufficient for its intended purpose.

There is also considerable talk both among the presidential candidates and members of Congress of shrinking the largest banks or requiring them to hold more capital as a percentage of their sources of funds.

Many observers feel that these activities will likely result in less lending; reduced returns on equity of all large banks; and considerable uncertainty for the employees, shareholders, and customers of these institutions.

Whose definition of progress is this?

Based on my sense of recent events and legislative activity, including Dodd-Frank, there really are only two big issues that are not well on the way to resolution.

One is Too Big To Fail. The other is the ethical climate that has been uncovered since the Great Recession in the actions of some employees and agents of major banks.

Unhappily for a bank’s owners, the only sure way to significantly abate the TBTF risks is to increase equity capital—permanently. I say unfortunate, as it will tend to depress earnings and likely impinge somewhat on banks’ willingness to expand lending activity.

The ethical lapses will ultimately be corrected by the application of liberal doses of transparency and the will to ruthlessly enforce internal controls. This will take a strong and continuous action by directors and executive managers of those banks—but at least the process has begun.

We are left with the challenge as banking industry practitioners of enduring the foolish and occasionally harmful rhetoric of the political campaign.

It’s not that we believe much of it. But we’re not sure how much the general public is absorbing of this heavy dose of negativity and criticism.

We are going to have to earn back the public trust on virtually a deal-by-deal basis and with no help from the political classes.

More in this category: « Are you pricing loans for risk? “Credit people, this is your wakeup call” »
back to top