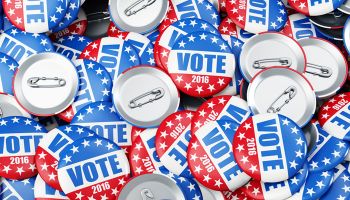 Although the presidential election is still several months away, we can see the issues that will animate parties and their candidates as well as the major potential impacts to our business models.

First, and most disappointingly, there seems to be a general backdrop of negativity toward business, judging by the occasionally strong anti-business rhetoric we have heard in the debates and the televised town halls.

The present administration has also taken direct aim at large corporate tax inversions, rather than focus on the issues relating to corporate tax reform. And then there is recent anti-merger activity by the Justice Department and a reported slew of new anti-business regulations coming.

All this is a general “downer” and it tends to sour the mood of the electorate, who happen to be our customers.

TBTF: Rift that keeps on gifting

This veneer of negativity spills over and adds fuel to the Too Big To Fail disputes that have infused to a greater or lesser extent the campaigns of all major presidential candidates. This is particularly so of Sen. Bernie Sanders, who has virtually elevated the break up of big banks to the level of a campaign promise.

It is clear that despite the efforts to deal effectively with the political risk of a taxpayer bailout of big banks, the Dodd-Frank law falls considerably short of a politically satisfactory resolution of the Too Big to Fail issue.

What puzzles me in all of this is how we don’t hear anything about the role of FDIC and the Deposit Insurance Fund to protect depositors, especially consumers and households, from loss of their deposit accounts.

This is the primary focus of any relief effort for a troubled bank—its depositors.

The depositors of failed and failing institutions typically have a much greater cumulative financial exposure than the equity holders in these institutions. Why no mention of that?

Senator Sanders’ position on very large financial institutions, those designated as SIFIs, is well known. And alarmingly, he is of the opinion that the authority exists under Dodd-Frank to simply break them up. Lawyers and policy makers might disagree with the letter of that assertion but there’s no doubt that a serious governmental effort to dismember or dismantle major institutions would be very disruptive economically and to the public confidence in banking.

Somewhat less obvious than a direct challenge to the political and regulatory sustainability of a big bank business model are the several efforts by the various supervisory agencies to influence the business practices of the banking industry.

Various agencies have used direct and indirect supervisory authority to dissuade banks from serving businesses that are otherwise legal under the law. To the degree that this reflects a general policy direction by the federal government, it is a hostile act and very disturbing.

Payday lenders are the most conspicuous example of such activity, although some pundits are ascribing a parallel interest in suppressing activities of business in the exploration and production of fossil fuels. For example:

• The year-long trough in the commodity prices of oil and gas has resulted in a level of supervisory pressure aimed at suppressing the availability of credit for producers of oil and gas.

All this is being done under the legitimate but perhaps exaggerated concern for safety and soundness of many larger banks as measured by current levels of credit exposure to oil and gas credit.

Beating up the Fed in season

It’s also appropriate to note the heightened criticism of the Federal Reserve Board by national political office holders and candidates during this electoral cycle.

The independence of the Federal Reserve is the most prominent pillar of sound monetary policy. Yet during this period of unprecedented low interest rates the Federal Reserve has come under serious scrutiny by presidential candidates of both political parties.

There seem always to be one or two “usual suspects” advocating a heightened level of oversight especially on the Fed’s rate setting mechanism. But this season there seems to be a much broader interest in meddling in Federal Reserve actions and policies.

And lurking in a corner…

There is another area of potentially very serious concern that lurks in the wings but represents a special hazard to the very largest institutions during this election season.

I refer to the deferred prosecution agreements that the Justice Department and supervisory agencies entered into with several banks foreign and domestic that were subject to the large volume of fines and sanctions over the malfeasance of a relatively few of their agents.

Conviction of a felony can result in the exclusion of a bank from conducting a normal range of banking activity. This was the painful lesson learned in 1992 in the collapse of Arthur Andersen following its conviction on a felony offense in the conduct of its audit of Enron Corporation.

Under a deferral arrangement, the authorities agree to dismiss a defendant’s guilty plea if there has been no evidence of a repetition of the behaviors subject to the original sanction for a defined period of time. If such behaviors are deemed to be ongoing, then the bank, pursuant to the terms of the agreement, could be immediately subject to a felony conviction.

During this election year and during the run up to the present day banks and banking have been the subject of enormous reputation risk. Governor Daniel Tarullo of the Federal Reserve Board and President William Dudley of the Federal Reserve Bank of New York have publicly stated that such reputation risk has reached the proportions of being a threat to these institutions’ safety and soundness.

Surely, anything of a negative nature triggering the voiding of a deferred prosecution agreement would be a grave danger to the institution itself but also the prevailing political attitudes toward SIFI banks in the context of TBTF.

More in this category: « Loose lips sink customers—and bankers What are big bank earnings telling us? »
back to top