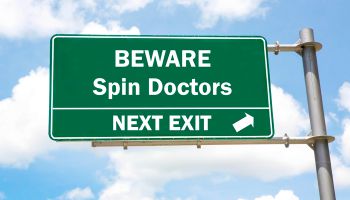 The utter indifference to what the industry has been telling Congress and the Executive branch—and the smugness of the Council’s collective reactions in the face of evidence to the contrary—is what really ticks me off.

I’ve led an online continuing education course for bankers for the last dozen or so years. The course subject matter is financial performance. It’s been increasingly evident to me and many others that risks in banking, risks like credit, liquidity, capital, market, and operational risks can be largely measured and anticipated by a careful analysis of a bank’s Uniform Bank Performance Report.

Over the years since the collapse of public confidence in 2008, I’ve been asked how we got to a point of such distress and distrust in the banking industry. I’ve got a list and here it is. Not all of it reflects well on some of our industry practitioners either.

1. There is often a disconnect between what we say and what we do.

The marketing department gins up the copy with little or no reference to what is actually going on. We don’t always walk the walk. Our cumulative credibility under the crushing weight of reputation risk has cost us dearly.

Senator Bernard Sanders proclaimed on numerous occasions that the business plan of banks is fraud. Say it often enough and people believe it. Find misbehaviors often enough and the case is made in many minds. How did we get so badly off track—and stay there for so long?

2. Many institutions had a misplaced emphasis on incentives.

We saw the folly of our actions pretty clearly in 2008 and 2009. It was lurking in enhanced and intolerable levels of credit risk and the spillover into reputation risk simply seemed to fortify Senator Sanders’ point.

Sure, the industry giants of the ‘60s, ‘70s and ‘80s did that too. But they had strong cultures that could detect aberrational or harmful results and nip them early.

We somehow lost that sense as we emerged into the post Glass-Steagall environment of “light touch” regulation. Some among the regulatory community have publicly asked if some banks have become too big to be managed.

Maybe we need more public dialogue on that question.

4. We worshipped at the altar of diversification.

We endured politically imposed product and geographical limitations on our business and largely overcame them with the creative application of technology.

But in the process we became powerful players in business lines, many of them nontraditional by historic standards, sewn up with new and different forms of risk.

We woke up to find that we had acquired the systemic risk but had no sense that it had been accumulating in menacing proportions for years.

Some bankers certainly seem to have been dead from the neck up.

5. We worshipped at the altar of Return on Equity.

We can increase ROE by increasing the fraction’s numerator or shrinking its denominator—or both.

Remember back in the ‘90s when banks were achieving returns on equity in excess of 20%? What risks were we piling onto our balance sheets?

With relatively low equity capitalization as an industry, not all risks are for banks. Who was asking if the returns were reflective of unwanted and unsafe elements of risk?

Where were the examiners?

I still own one of those “sudden accelerating” Toyotas. It’s been subject to three recalls!

In the frothy and heady years for Toyota leading up to these troubles, executives from competing manufactures were asking, “How does Toyota do it?”

The sorry answer was ultimately that they couldn’t.

In a similar vein, were the regulators and senior managements and directorates of the largest banks engaged in willful blindness? Who was looking out for the safety and soundness of the banking system?

Turns out that many of us couldn’t do it, just like Toyota.

6. We were subject to all manner of silliness by regulatory and congressional whim and fiat.

Community Reinvestment Act gyrations, lending goals driven by HMDA data, truth-in-lending, ECOA, etc. may be worthy social goals but the enthusiasm by which these requirements were laid on us by regulatory authorities was beyond the bounds of reasonable or respectful behavior.

I recall the line from Shakespeare’s Julius Caesar: “Yon Cassius has a lean and hungry look.” We were the victims.

And now we face the ultimate onslaught. Our government and its agencies are engaged in punitive and punishing regulation of banks as a consequence of the Great Recession to the point of driving many community banks’ business models into obsolescence.

That may be an unintended consequence—but it’s a real one.

Now the piper wants his pay

Prudent money won’t tolerate that sort of circumstance for long so what’s coming is too obvious.

We will see a continued contraction of banks in the marketplace and banks that are of a size that do proportionately much more small business lending than the big banks.

The losers will not be the retail banking consumers who are customers of the chain banks. Instead, we are squeezing the heart and sole of community banking out of existence and in the process, we’re doing potentially irreparable harm to small businesses.

What reaction do we get from government?

• From the Executive Branch, we get Jason Furman. He utters factually incorrect and misleading political spin. How helpful is that, from purported experts who advise the nation’s chief executive?

• From Congress we get the attitudes of Bernie Sanders and Elizabeth Warren.

But can you really blame them when we’ve seen numerous instances of qualified admissions of guilt by huge banks entering into deferred prosecution agreements? Billions in fines and settlements paid (albeit extortion payments as described by some)?

And all the while no one seems to understand the existential plight of a third to half of the banks currently operating?

“No one cares” is one interpretation of the current circumstance.

I occasionally have a darker view—that this is all deliberate.

Oligopoly is a word that describes what the current situation looks like to me. Senator Elizabeth Warren doesn’t trust the big banks and well she might not for the behaviors that have been showcased in the last several years.

But by punishing the small-to-medium-sized institutions with mind numbing compliance and regulation, she promotes an oligopolistic competitive environment among the remaining players.

You could very well argue that the “fix” will entrench what needed fixing even more than before.

Oligopoly is not necessarily a dirty word. However, the “reductio ad absurdum” direction of current government policy is directed toward producing a highly oligopolistic form of banking in the United States.

Then it will be left to a future Congress and Executive to break up the oligopolies and reinstate a vibrant and health community banking system.

Perhaps the spin is making me dizzy. But do you think this is all that far fetched?

More in this category: « Are you ignoring flashing yellow lights? What’s really in a CEO’s job description? »
back to top