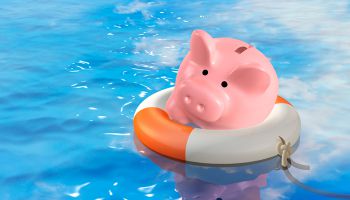 Kashkari unveiled a proposal, dubbed "The Minneapolis Plan to address Too Big to Fail," that would require banks with more than $250 billion in assets to build common equity to 23.5% of risk-weighted assets, nearly double current levels, over a five-year period. If enacted, Kashkari would push away investors and likely prompt the breaking up of the nation's biggest banks, and he is just fine with that. [See also "Key questions about the Minneapolis Plan to End Too Big to Fail"]

Source of plan no surprise

Kashkari has been quite vocal that large banks should not exist in their current form, suggesting they should be split up or be turned into utilities. He has also argued that they need to hold more capital.

Kashkari, who oversaw the Troubled Assets Relief Program during the financial crisis, believes his latest plan is the only way to avoid repeating the past. He estimated that the 13 impacted institutions would have to raise $807 billion in additional capital to comply with his proposed capital requirements.

Kashkari calculated the shortfall first by looking at the difference between the higher, proposed capital standard and institutions' equity as of the fourth quarter of 2015. He then considered the cost of debt and return on equity at the covered institutions, and assumed the group of banks would pass through half of the higher cost of equity by increasing rates on loans.

Looking simply at the banks' capital levels at the end of the third quarter, we found that the current shortfall would be $924.8 billion. That assumes no change in the group's risk-weighted assets, that they return no capital to shareholders, and assigns no benefit from future earnings. If the group maintained the same level of earnings produced over the last 12 months, it would collectively take 8.6 years to earn the capital shortfall.

The elevated capital standard that Kashkari proposed derived from the highest requirement laid out in the total loss absorbing capital (TLAC) proposal issued by the Fed. Kashkari's proposal is far more punitive than TLAC, which requires banks to hold a combination of debt and equity. Kashkari argues that common equity is the only thing that "can stand the test of time" because it is the only true loss-absorbing instrument.

Even if that is true, the cost of the Minneapolis Plan would be considerable and reduce economic activity due to the restriction of credit. Kashkari accounted for the negative economic impact, estimating that the plan would result in a 24% hit to GDP at the base case and possibly up to 41% of GDP if the highest level of the proposed capital standards were imposed. Comparatively, he noted that the cost of a typical banking crisis equates to 158% of GDP.

That is a fairly large assumption given each crisis takes different shapes and ultimately the impact of such enormous capital increases is unknown. The higher capital requirements would certainly help reduce systemic risk, but the proposal wouldn't prevent future credit cycles from occurring. Even if large banks were far better prepared to withstand a crisis, cycles and recessions come and go. For instance, there has been a recession in the U.S. every seven years, on average, since World War II.

Kashkari's proposal would also strike a big blow to already-reduced returns at the nation's largest institutions. For much of the last few years, large bank investors have endured significant sector underperformance and unlikely would be willing to accept greater dilution. If the institutions lost their investor base, they would have to seriously consider breaking themselves up into smaller pieces.

Kashkari acknowledges this possibility, and that almost seems to be the point of the proposal. He likened the proposal to treating large banks like nuclear power plants: If they want to operate in their current form, they will be so highly regulated that the risk of failure is minimized. And if the biggest banks decide they want to avoid punitive regulations by breaking up, so be it.

The Minneapolis Plan seems unlikely to be enacted given how punitive the provisions are. However, the proposal will impact the debate around future big bank regulation. While many bank observers are heralding the prospect of deregulation in the aftermath of the recent election, the plan should keep regulatory pressure on the nation's largest institutions.

This article originally appeared on S&P Global Market Intelligence’s website under the title, "Truth and consequences of Kashkari's plan to end TBTF"

No other national banking association statements on the plan have been published.