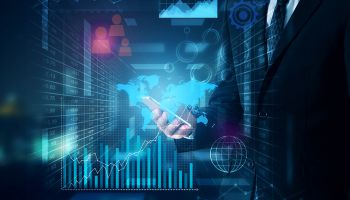 When then-Comptroller Thomas Curry introduced the term “responsible innovation” in a March 2016 speech, he set in motion a process that went on to produce multiple results. First came a statement of recommendations and decisions regarding innovation and the regulatory role in it, published last November. This was followed by the controversial “fintech charter” proposal that is now in federal court. But an ongoing effort with long-term promise for all players in financial innovation was also launched—OCC’s Office of Innovation.

This was not intended as the home for a regulatory “sandbox,” a concept adopted by regulators in the U.K. and some other countries—Curry did not approve of the “safety zone” implied by that process.

Instead, the new office was initiated as a clearinghouse within the agency for issues and concepts that OCC believes it needs to watch. This, and to serve as a place where all players involved in innovation—banks of all sizes, fintech companies, even fintech investors—could come to air questions and concerns and to share what they are learning and thinking about.

“We’re a central point of contact within the agency for issues around innovation in the financial services industry as well as emerging trends,” explains Beth Knickerbocker, Chief Innovation Officer for OCC. “We’re constantly looking for those emerging trends and innovations happening in the financial services industry, and sharing that with the subject matter experts and business units within OCC.”

While the office is a central home for innovation, Knickerbocker makes it clear that many parts of OCC look at new developments. 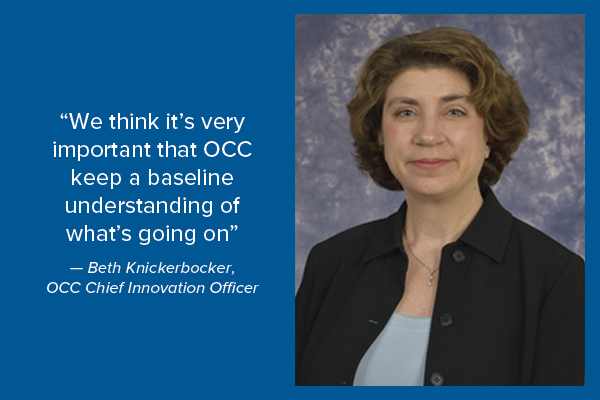 “Take faster payments,” she says. “We have a whole emerging payments division that looks at those issues, and which participated with the Federal Reserve on the faster payments initiative. So we coordinate within the agency on such issues.”

Knickerbocker describes the office’s role as “partnering” with other elements at OCC. Innovation in general, and fintech in particular, are fast-moving and keeping up is challenging, she reflects.

“We think it’s very important that OCC keep a baseline understanding of what’s going on, and that’s done in a number of ways,” says Knickerbocker. Among these are research, outreach to the industries involved, and conversations with other regulators.

The “office hours” program that Knickerbocker’s section inaugurated this year was designed with some consultation with Project Catalyst staff at the Consumer Financial Protection Bureau, for example.

Fitting the present to the future

Knickerbocker’s office is intended as more than a regulatory “think tank.” Part of the office’s role, beyond the Washington staff functions, includes making sure the examiner force—where OCC deals most directly with banks—keeps up to speed on what is evolving in the industry.

Knickerbocker explains that part of what her office evaluates is whether existing policies and guidance already published by OCC still apply, or whether changes may be indicated based on the industry’s latest direction.

This is important because, for all the new ways that are being invented to accomplish financial transactions, the basics remain pretty, well, basic. Deposits are still deposits. Credit is still credit.

“Some people get confused,” says Knickerbocker. They may, she says, think that something invented in 2017 isn’t covered by guidance issued, say, in 2013, because the guidance didn’t include or envision the new development specifically.

“That’s certainly not been our experience,” says Knickerbocker. “But sometimes we need to clarify that.”

Knickerbocker, an attorney, comes to her post with a strong background in risk management, based on experience in banking, law, and regulation. Prior to rejoining OCC in 2014—where she began her career—she was vice-president and senior counsel at the American Bankers Association, where she worked on risk management and regulatory issues. Knickerbocker set up the new OCC office initially in an acting role and in May officially took the new post.

As an example of fitting the past and present to the future, Knickerbocker points to OCC’s new FAQ on third-party risk management, issued in June. Questions 7 and 8 specifically speak to partnerships with fintech players, but much in the document applies to such relationships.

“We weren’t reinventing the wheel there,” says Knickerbocker, “but we had received enough questions about fintech partnerships since our earlier guidance was issued that we responded in our FAQ.”

As that example illustrates, the new ground of innovation sparks questions and uncertainties.

One of the goals for the office is to be a place to ask such questions.

“What we’re setting up here is an opportunity for banks, fintechs, and other stakeholders that have questions concerning innovation—or who want to share something they’re learning—to do both outside of the supervisory process,” says Knickerbocker.

Related to this is a function she calls “outreach and technical assistance.” While some questions may be broad and conceptual, other concerns may be quite specific.

Knickerbocker explains that banks and fintechs can ask detailed questions. She and her staff may not be able to answer them off the bat, but she says they will find the right person at OCC to answer the query.

Innovating at OCC itself

Out of the prudential regulators, OCC has most publicly embraced innovation, in the context of its “responsible innovation” label. Other agencies, as well as state regulators—including through joint efforts through the Conference of State Bank Supervisors—have clearly been working on these issues, but OCC has given them a definitive public home.

The job entails a balance between keeping up with leaders and being there for other banks as they come up to speed and crave guidance on how to proceed.

“Like any agency that isn’t right there developing new products and services on the bleeding edge, there might be some institutions that are starting to institute things before we’ve spent a lot of time on them,” Knickerbocker acknowledges. “Our goal here is to make sure that we’re ahead, at least, of the traditional industry curve so we can better understand the issues and have more effective conversations with all of our regulated entities during this phase.”

Innovation represents a big area to get the agency’s arms round. There is an inevitable picking and choosing among new technologies and the issues that arise from them, in terms of what to simply be aware of and what to do “deep dives” on. Knickerbocker says part of her office’s function is to ask subject matter experts at OCC if they are aware of this new wrinkle or that, to share what they are learning.

“It could be artificial intelligence today, but tomorrow it could be something very different,” say Knickerbocker. “We want to make sure that OCC has an infrastructure and framework to support whatever that innovation may be. We want to be sure that institutions within the federal banking system are innovating in a responsible manner.”

Even as the agency was framing its approach to innovation, Knickerbocker says, the climate been changing.

“Back in 2015, when we started this effort, there was a vocal group of fintech companies who were focused on disruption, and a lot of talk about whether this was an ‘Uber’ moment for financial services and banks,” Knickerbocker says.

Since then, she says, while some fintechs maintain that stance, she’s seen a broader evolution in attitude. “There’s more interest in partnership and in how to work with banks,” she explains. “And then there are some fintechs that are interested in becoming banks now.” [Recent examples include Varo and SoFi.]

The evolution hasn’t been one-sided, either, says Knickerbocker. “The industry has learned from fintechs,” she says. “Now bankers are talking about different mechanisms to improve efficiencies.”

This evolution among banks has been seen in increasing interest in artificial intelligence and machine learning and the potential use of distributed ledger technology to make backroom processes more effective, Knickerbocker says.

“They’ve been thinking about the use of different data points to make effective decisions, and those types of concepts,” she adds. “And then, there’s the cloud.”

Office hours outside of Washington

A big part of the job is communication. “We meet with most of the players in the innovation ecosystem,” says Knickerbocker. This includes banks of all sizes as well as fintechs. “We’ve also had some venture capitalists come in and ask questions. Or they come in with their fintech.”

A new thrust for OCC in the course of setting up the innovation office has been taking the staff into the field to meet with interested parties in formalized “office hours.” These are private meetings arranged over specific dates when Knickerbocker and her staff visit a city for a couple of days. OCC held office hours in San Francisco in May and in New York City in July.

Office hours appointments run for an hour. Knickerbocker and her staff attend, and sometimes include a subject matter expert where it makes sense. The visitors have many questions, but Knickerbocker says the meetings are valuable for OCC because staff is meeting face-to-face with banks and companies that are innovating.

“We hear what’s going on in their space, what they are focused on, and what challenges they are seeing,” she says. She says the visiting firms set the agenda, telling staff in advance what they want to speak about.

Knickerbocker says many questions involve the details of bank partnerships; how regulations apply to a planned activity; and what role OCC would play in a particular issue.

The high level of interest by players has been a pleasant surprise for Knickerbocker. Since the first two meetings she’s received requests to hold hours in other parts of the country.

She says she has heard growing enthusiasm in partnering between banks and fintechs, taking advantage of mutual strengths and finding synergies through combined efforts.

In the course of her work, Knickerbocker has found two separate, but equally interesting, issues resulting from the intersection of brand-new fintech industries and the historically highly regulated and supervised banking industry.

One is the strong emphasis on regtech. 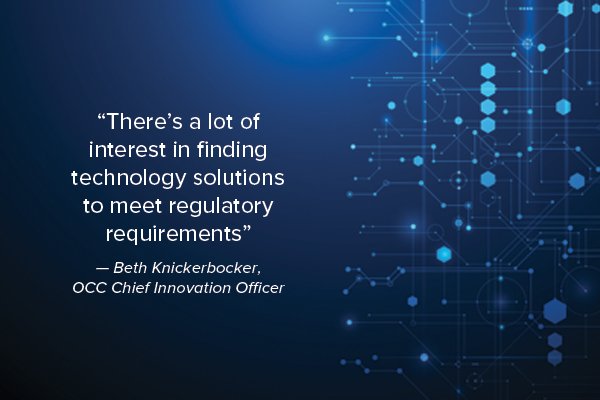 “There’s a lot of interest in finding technology solutions to meet regulatory requirements and compliance requirements,” she says. Specific longstanding “pain points,” in her words, such as BSA/AML issues and risk management, are in the sights of companies she hears from.

“We’ve heard a lot about that during office hours,” she adds.

The other observation Knickerbocker makes concerns fintech players’ understanding of regulation and how it influences bank behavior—or rather, misunderstanding.

One aspect of this concerns the role of regulators in banks’ decision-making in innovation. Many fintechs think there’s a process of regulatory approval necessary to a bank launching into a partnership, “and in most cases, that is not the case,” she explains.

What may give this impression is that banks typically tread carefully when structuring such deals.

“It could take a bank some time to go through its own risk management and due diligence process,” says Knickerbocker. “I’m not sure why, but sometimes the fintech company equates that somehow to a regulatory hurdle. So we need to explain what our role is.”

On the other hand, Knickerbocker has found that more-established fintech companies appear to be adapting to the banking world.

“Some of them have started looking at handling compliance expectations and requirements in a more bank-like way. They are setting up compliance risk management programs that will look more like what a bank is expected to do,” she explains. “And they are hiring compliance officers—sometimes those who formerly worked for banks—or hiring law firms or consulting firms who work very closely with banks.”