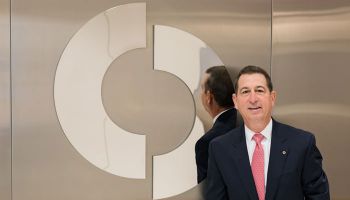 Reforming CRA regulation, taking a fresh look at BSA/AML enforcement, getting banks back into small personal loans, and simplifying capital regulations rank high on the agenda of new Comptroller of the Currency Joseph Otting.

Joe Otting brings a different background to the job of Comptroller of the Currency.

Unlike many previous comptrollers, he is not a lawyer. While many lawyer-comptrollers represented banks, bankers will appreciate that this new regulator spent over three decades as a banker—one of them. Indeed, he knows not only what it is to be a banker in both private and public organizations, but what it is like to be in the regulatory cross-hairs. And it clearly will have an impact on his attitude in his new job, which he was sworn into in late November.

In 2011 Otting, then president, CEO, and board member at OneWest Bank, N.A., had to sign a consent order regarding its mortgage servicing and foreclosures practices.

“It was not a great experience for me,” said Otting during a group interview with a small group of financial journalists, including Banking Exchange.

“I’m trying to put this delicately,” said Otting. “There was no choice about signing that consent order.”

Otting felt OneWest hadn’t made the volume of errors other institutions had—an independent review showed error rates of “basis points,” he said—but the atmosphere had grown heated and emotional because of the many people losing their homes.

I’ve been on the hot seat

Otting believed OneWest had done much to try to avoid problems and to work with affected borrowers. In fact, he told reporters that one doesn’t hear about the 68% of borrowers whose homes the bank saved. He said that he ended the experience convinced that he and his staff had not been “bad actors” and had done “everything we could to save people’s homes.”

“There were a lot of soul-searching nights, about whether I was willing to put my name on that consent order,” said Otting. He considered resigning his post.

Ultimately, he said, he saw the signing as inevitable, and “I did it for the employees and customers of the bank.” In 2015 OneWest, which was started by now-Treasury Secretary Steven Mnuchin from an FDIC-owned bank, was sold and became CIT Bank.

What did Otting take away from this unpleasant experience?

“Regulators should give people the right to prove their innocence,” said Otting.

More than one banker has had their time in the regulatory “hot seat,” but it is rare for a bank regulator to bring that kind of empathy to the job.

This is not to say that Otting is anti-regulation or against bank supervision, even though he is the appointee of a president who clearly wants to do more than trim the regulatory hedges.

Otting sees the importance of banking institutions being regulated, and even sees it as something of a competitive plus, in that it can erect a barrier—albeit a penetrable one—for those who would conduct certain bank-like activities.

“I’ve never met a banker who told me that they didn’t want banks to be regulated,” said Otting.

What Otting appears to favor is some moderation. Post-crisis the regulatory system swung to an extreme, he said. By way of illustration, he recalled how, when OneWest went public, it had to build a different board. Board members were taken through training by the bank staff.

About 90% of the “curriculum” concerned compliance and risk management, Otting recalled. Finally, he said, one of the new directors turned to him and said, “When do you guys focus on your customers?”

“Where we are today is a good spot,” he said. He believes a benefit from the crisis was an increased emphasis on risk management. This brought on formation of more risk-related committees and beefing up of risk management staff.

Overall, Otting thinks the banking industry is currently in the best shape it’s been in since he joined the industry in 1981. He speaks from experience, having served as vice-chairman at U.S. Bancorp prior to going to OneWest, and earlier, in positions at Union Bank of California and Bank of America.

Otting reviewed his priorities for reform in the immediate term and in the longer-term—the latter meaning within 12 months. Some issues—a key one is fintech’s impact on banking and the OCC’s proposed fintech bank charter—clearly are on his radar but he didn’t specify time frames for them.

Policy priorities for Otting that he spoke of at the meeting, for the immediate term, include the following:

• Community Reinvestment Act reform. Otting said that he knows the CRA process well, having been a banker. He says bankers take community investment seriously—it’s part of doing their business. But he believes reforms in the regulatory approach are necessary.

So much has changed about banking and the U.S. economy since the original, quite short CRA law was passed in the late 1970s, according to Otting. A major concern—evident in the very name of the law—was that deposits were leaving neighborhoods, denying them the use of those deposits as loans.

But current developments, such as online deposit gathering, have led to a newer wrinkle, said Otting. Many of those online deposits come from the affluent, he said, and go towards lending to moderate- and lower-income borrowers.

One aspect of CRA that Otting believes needs revisiting is the area of ratings.

“It is too easy to get a ‘Satisfactory’ and too difficult to get an ‘Outstanding’,” said Otting. “Should there be a recalibration? I think there should be.”

Otting also said that the product categories reviewed in CRA exams should also be considered.

Otting said he hopes to have some thoughts on revising CRA in writing to put before fellow federal regulators in the next 60 days.

Interestingly, a priority of Comptroller Eugene Ludwig, during the Democratic Clinton Administration, was also to reform CRA regulation. At the time, CRA had become a file-filling process, where consultants frequently urged bankers to stuff paper files full of every proof they could find of their institutions’ community involvement. Ludwig held extensive hearings before building a framework that was intended to emphasize results, not paperwork.

• BSA/AML compliance. This is a tricky area for bank regulators, Otting noted. The rules banks must comply with are not written by the bank agencies, but they handle examinations to ensure compliance with rules issued by FinCEN and others. He compared OCC’s role to being an umpire, enforcing rules set up by others.

The goals for this regimen of compliance make sense, but Otting said the process needs to be reviewed with an eye towards revision.

“We have virtually most of the major banks under some type of [enforcement] action” related to BSA/AML issues, Otting said. Community banks have challenges as well, as they are expected to follow the same rules the major players do. Otting said the process of filing Suspicious Activity Reports generates millions of documents. But he said banks must also be ready to substantiate why they didn’t file SARs in other situations.

• Small-dollar loans. Otting would like to find a way to bring more small-dollar lending back into the banking industry. This concept has been kicking around the agencies, notably FDIC and later CFPB, for a number of years. The problem, Otting reflected, is that it is expensive to provide such loans through traditional methods.

Otting said marketplace lenders have moved further into consumer credit because they see an unfilled need that they can meet. He suggested that both banks and fintech lenders could serve the market. He said that fintech lenders’ underwriting will typically extend further down the credit hierarchy into zones that banks generally will not touch. This would thus enable investors to still have the opportunity to invest in marketplace credits, said Otting.

At one point, Otting spoke about fintechs in general, and said he would not want to see insured deposits being used to make subprime loans.

• Role of Examiners In Charge. Otting said that EICs—the top on-site OCC official during an exam—“need to be re-empowered.”

Otting said that in recent years more and more examination decisions have been made by headquarters staff or other officials who are not in the field. More and more decisions regarding issues that come up in exams have been sent up the hierarchy, he said, with the EIC awaiting the result as much as the bank that’s involved.

In the longer term—within 12 months—Otting wants to start doing something to simplify U.S. capital regulation for community banks. He said one solution might be along the lines of the leverage ratio contemplated under pending legislation.

What about the fintech charter?

Otting began speaking of fintech by noting how much of our lives today are based on our smart devices.

“Our world has evolved,” said Otting. “I take Lyft or Uber every morning to work. Technology and fintech have a role in the system.”

Otting said he believes something like the fintech charter proposal made under former Comptroller Thomas Curry has a future.

“I’m not sure what it looks like,” said Otting, “and how it will be funded.”

The future of the proposed charter and fintech in general is something that Otting said needs further study. He said he needed to speak further with OCC staffers handling fintech charter issues.

The recent decision in New York State’s lawsuit against the agency’s proposed fintech charter, though favoring OCC, was not conclusive. Otting pointed out that since no charter had been granted, the federal judge dismissing the case hadn’t had much to work with in making a decision. [Read "Not 'ripe,' says judge dismissing N.Y. fintech charter challenge."]

Otting led a free-ranging discussion, only declining inquiries that touched on issues where he still needs to recuse himself until he completes disposal of financial stocks. Among other issues touched on:

• Separation of banking and commerce. Acting Comptroller Keith Noreika had devoted an entire speech to this issue, urging that it be revisited. Reporters asked what he thought about the idea. but Otting made it clear that’s not his issue, and hadn’t given it a lot of consideration. “I have shallow views on that, but I don’t see it on the 12-month priority list,” he said.

• Bitcoin. When asked about this, he turned the question around and asked the assembled reporters if any of them owned any Bitcoin. None of them did.

Otting said banks hadn’t done much with Bitcoin. He acknowledged the run-up in Bitcoin prices, but also expressed some skepticism about the currency. At present this is a market currency, he said, and for that to work there must be both a bid and an ask.