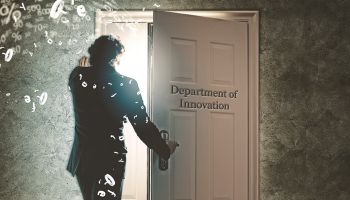 Not news, but here’s one definitively from the Interesting Department! Believe it or not, a clever mind has created a whole new sensation.

The interesting part of this pepperoni promo was after the DVD was played and then ejected, out would pop a DVD that looked and smelled like a pizza. When the disk cooled the image would fade away. How cool (hot) is that? So, now you really want a pizza. However short-lived the marketing campaign was, I am sure it had Brazil excited because everybody had to go to the video store and rent one of the special DVD’s. A great idea if it was only for the novelty of it all.

It is understood that the video store market domestically almost dissappeared due to competition from Netflix and Redbox, but the concept and application intrigues me. A creative mind has taken advantage of technology that is overlooked by many, but seen by them.

So the question must now be asked; what combination of technology in the financial institution space are we overlooking because we don’t see the possibilities? Sounds like a great challenge question to me!

Question: What is it that you don’t see, but should? Interesting!

Tagged under Management, Lines of Business, Retail Banking, Beyond the Bank,

More in this category: « PLUS-ing the platform! EMV adoption … not fast enough! »
back to top