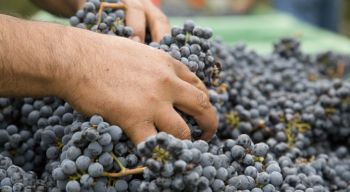 “And we live 40 miles from the epicenter,” says Beak, with Bank of the West.

His plans for Sunday would change.

When Beak made it to his office in downtown Napa, “it looked like a case of pretty severe vandalism.”

Bookcases had toppled, computers were on the floor—it was a shambles. Nearby, some of the older buildings in the city had suffered significant damage. Even some structures in the city that had undergone earthquake reinforcement were damaged. City officials were estimating last week that the costs exceeded $300 million in residential and commercial property damage alone, not counting loss of business inventories, damage to public buildings, and other factors.

But Beak’s top priority that Sunday was not his office, but his customer base—wine business clientele in the Napa Valley and environs. He had to assess how his bank’s wine and wine-industry-supplier borrowers in the Napa region had made out.  Beak is senior vice-president and manager of the bank’ North Coast Agricultural Banking Center/Premium Wine Group.

The banker and his son, Mason, ventured out by car to see what they could of the damage to customer facilities and inventory.

Red and yellow tags for downtown

Beak also saw wall-to-wall television reporters downtown, each trying to do a dramatic “standup” on some corner with damage in the background.

Within Beak’s earshot a tv reporter was nearly screaming into his cellphone, trying to convince his news desk that the assumed devastation of the Napa wine business was a big, big economic disaster story.

No denying that the quake was big news, says Beak, but he says he felt the reporter was exaggerating through lack of local knowledge.

“The fact is, we just started the ‘crush’,” says Beak, referring to the harvest and pulverization of the area’s grapes. “There’s not that much fruit in the door yet.”

The harvest continues through September and October, Beak explains. Indeed, one winery owner told a local reporter that had the quake struck during the height of the crush, workers would have been in danger from tumbling casks and equipment. No workers at that facility were hurt, although there have been injuries from the quake.

Sorting out the meaning

While some of the area’s wineries suffered building damage and some had barrels and heavy equipment toppling, Beak says that many of the news photos of broken wine bottles and pools of wine on floors come from retail wine shops, not wineries. The bulk of wine bottled and prepared for shipment from production facilities is in cases and the cases stacked on skids, held together, typically, by shrink wrap. Much of this seems to have made it through intact.

Still, Beak says, for some older wineries that had not invested in the latest earth-quake-ready construction or rehabilitation, the quake and resulting damage is something of a “wakeup call.”

Between Beak’s initial tour and follow-up legwork and phone work, by the end of the week he had a good preliminary view of the customer impact.

“It’s not been a wholesale devastation,” says Beak. He explained that, based on what he’s heard and seen, one winery might have had damage, while the one next to it might have been completely unscathed. Typically newer facilities that are up to modern earthquake construction codes made out better than older ones not up to those standards.

Most of Bank of the West’s approximately 300 winery customers were fortunate. The damage suffered, where it happened, was comparatively minor. Beak says that only three customers suffered damages exceeding $100,000.

While it’s still early in the recovery, Beak didn’t think there would be much for his bank to do in terms of revising credit arrangements or offering other forms of assistance.

“A couple of the barrel storage facilities had significant damage, which hurt the smaller folks that store offsite,” he said.

“It was a pretty severe shaking, and it was pretty scary,” Beak continues. “But that was on the personal level, for people out here, rather than on a business level.”

But another challenge awaits the Napa-area wine industry.

Region’s appeal is not just about selling wine

Actually, a big part of the region’s income hinges on winery tourism. The area economy makes a large part of its revenue from tasting room sales, restaurants, and spas linked to the winery business. Beak says the impact on tourist’s plan remains a major concern. After-shocks continued after the main quake, with those tremors continuing a full week after the initial earthquake hit.

The 6.1 quake, the worst in the area in 25 years, was followed by a 3.2 aftershock the following Sunday. Scientists have revised the location of the “South Napa Quake” epicenter from Napa proper to somewhere in the Carneros area, which connects Napa and Sonoma. That area is especially known for Pinot Noir and Chardonnay grapes. [Visit KQED’s interactive map]

“Hopefully people won’t think things over and decide not to visit,” says Beak. “Tell people that we’re open for business.”

Whether a heavy quake will affect the vintage remains to be seen, but there is some history in the business of turning lemons to lemonade, or is it grapes to grape juice?

Beak recalls a big fire a while back that appeared to affect the flavor of one winery’s grapes. The winery went ahead with production, Beak says, and named the product “Wildfire Red.” It may be, he says, that tourism could even pick up, because of Mother Nature and human curiosity.