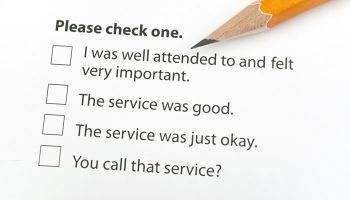 Nearly a third of companies (29%) experienced an error with their primary bank in the past 12 to 24 months; and more than half (57%) were less than highly satisfied with the resolution, according to EY’s global commercial banking survey.

This poor service is pushing businesses to look for alternatives—be that moving their primary accounts to a rival bank or moving certain services to a nonbank.

• 34% of businesses are considering switching their primary banking provider.

• 38% of businesses will consider using a nonbank for banking services.

Globally, more than a half (57%) of the commercial banking customers surveyed report being less than highly satisfied with their bank’s resolution of their situation. While companies in developed market in the Americas report higher satisfaction levels (60%), a staggering 79% of companies in developed Asia-Pacific markets are less satisfied with their banks’ responses; 62% in developed Europe, the Middle East, and Africa markets are less satisfied.

“Banks need to take note that relationship history alone is no longer enough of a reason for a company to remain loyal,” warns Christopher Harris, principal, North America Practice Lead for Wholesale Banking, EY. “The fact that routine errors are having such a damaging impact on businesses’ satisfaction levels, and that banks are more often than not failing to resolve these issues appropriately, is a significant cause for concern.”

Give them a nudge and they’ll go

The survey also shows how open companies in emerging markets are to making a change. More than half of the commercial banking customers in emerging EMEA markets (53%) indicated they would consider switching their primary bank over the next year; 42% of emerging Americas and 29% of emerging Asia-Pacific.

While pricing is among the most-often-cited reasons for switching providers, companies that have recently changed banks indicate a range of influences, including product capabilities, access to capital, bank reputation, and geographic coverage as key reasons for making the change.

Businesses that decide to switch providers are not always very satisfied when they do switch.

Increasingly rigorous compliance requirements have resulted in almost half of those surveyed (46%) describing their first experience with their bank as “frustrating.” Banks in developed Asia-Pacific markets had the highest level of customer dissatisfaction, with 77% customers reporting they were less than highly satisfied.

Of the customers who said they were less than highly satisfied, four areas were cited where banks should focus on making improvements: accuracy of transition (34%); reducing paperwork and documentation (27%); improving communications (26%); and shortening the duration of the process (13%).

Putting some color into these number, Steven Lewis, global lead analyst, Banking and Capital Markets, EY, blamed part of the problem on redundancy.

“Multiple requests from different departments and repeated requests for the same piece of information are major pain points for new customers,” says Lewis. “Over the longer term, management teams will need to make investments in both processes and technology to simplify and improve the experience.”

In the short term, says Lewis, “setting reasonable customer expectations, providing more frequent communications, and improving coordination across different parts of the bank are quick and easy ways for banks to improve the customer experience and foster loyalty from day one.”

An increasing number of customers are doing more of their banking via digital channels. The survey shows that 80% of commercial banking customers are using online banking every week and almost 70% are using mobile banking weekly.

Companies would increase their use of online and mobile if the following features were added: enhanced security (48% for online and 46% for mobile); electronic signature (37% online), and ability to track progress of transactions (37% online and 32% mobile).

Who banks’ rivals are

More firms from outside the traditional banking industry are entering the market. Longstanding alternative providers, such as credit card issuers and insurance companies, are being joined by telecommunications and technology companies, alternative asset managers, peer-to-peer lenders, and specialist internet firms, competing in core banking areas ranging from lending and trade finance to foreign exchange and merchant services.

Advances in technology are allowing nonbanks to expand their financial service offerings. While no single nonbank is likely to threaten traditional institutions, executives are increasingly turning to nonbanks for a wide range of products and services.

Harris says: “These new, alternative providers are not faced with legacy IT systems and dated infrastructure and processes. As a result, they can start from scratch and build new systems to meet the needs of today’s customer.”