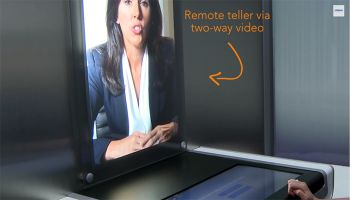 Consultation with a remote banker—perhaps even an expert in a specialized area—is just one of the extras the Diebold Responsive Banking Concept can bring to bank customers. A company executive equates the center with automakers' "concept cars," that offer many innovative elements that can be adopted wholesale or as needed.

Is this a recipe for modern retail banking?

• Take one part teller counter, remove the teller, and replace it with an avatar and a layout that puts most of the traditional elements of an ATM and a teller station into the avatar teller’s routines. For flexibility, add a touch-screen tabletop.

• Add a decorative pylon that morphs into a fully functional ATM that can accommodate cash requests that you place in advance on your smartphone, and much more. And the ATM can recognize you.

• Mix in a consultation station where two people can sit face-to-face and engage with a live banker via screen, with a table between them that uses touch-screen technology to drive all kinds of interaction with the bank, including what-ifs. (A third can be accomodated seating in the space.)  Include a feel more like a living room, plus directional audio technology that emphasizes a feeling of privacy.

• Stir in some nifty features to spice it up, such as the ability to shift every design element to another institution’s colors, look, and logos on the fly.

Bolt it all together and put it in a steel and glass box that a bank can install anywhere it can connect to power and the internet—even temporarily—and you have a bankerless branch in 118 square feet.

Innovation platform and “concept car” in one

Diebold officially unveiled the concept at Money20/20 in November, but has been showing it to industry investors, analysts, and banking media representatives before and since. Banking Exchange looked at the fully functional concept display in early December during Diebold, Inc.’s Investor Day.

“It’s a plug and play branch,” says Watson. He says Diebold’s team designed the pod-like bankerless branch to demonstrate techniques banks can make use of while also permitting updates as technology and industry and customer preferences evolve. The team intends for the concept installation to be a concrete embodiment of the omnichannel, merging new ideas with traditional physical delivery. 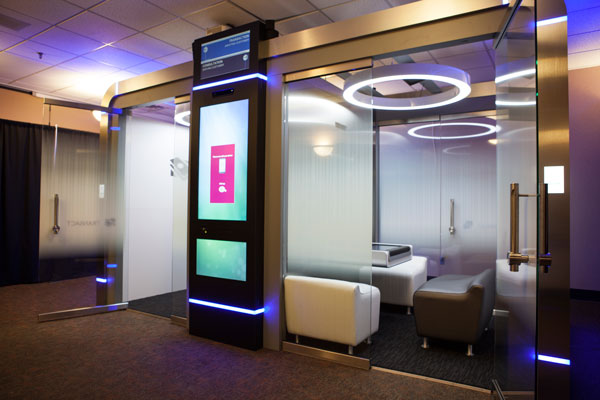 “Here, the two worlds collide in a meaningful way,” says Watson. He said that the incubation team works with financial institutions, other technology companies, and academic and private experts to develop products like the responsive concept.

Each station of the company’s “concept car” incorporates a depth of technical detail that you aren’t even always aware of. The media wall that becomes an ATM looks merely like a decorative element at first. The various stations can recognize customers by facial recognition, by detecting mobile devices, or voice recognition, using such technology as NFC, iBeacons, and motion detectors. 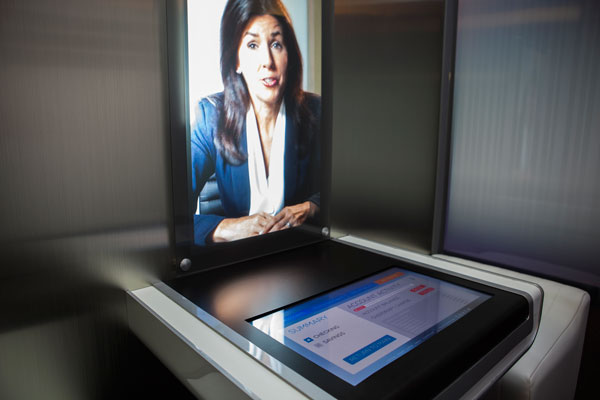 Consultations can vary according to what the customer needs that day. Watson points out that often a consumer requiring a particular expertise—such as setting up an estate checking account—might not even be able to see that specialist the day they visit a traditional branch. If they do business with a bank using the responsive concept, they can be routed to a staff expert immediately, connecting via screen. 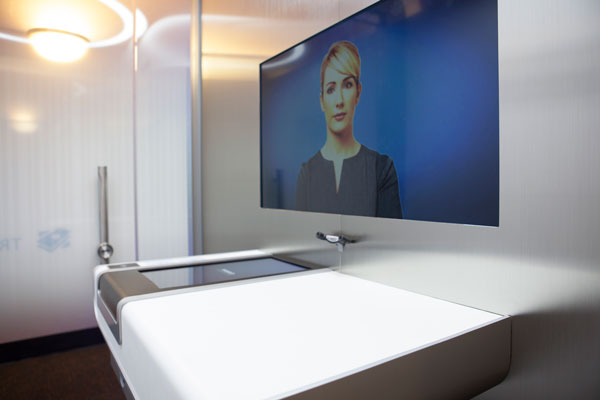 While the station for transactions features a video avatar, when matters become more complicated than expected, a live banker, operating remotely, can step in, much as a supervisor might in a live teller transaction.

Installations have not been planned yet, according to Diebold’s Richard Harris, vice-president, new technology innovation. “We’re in the stage of exploring and seeing what resonates,” he explains. Ideas range from siting the responsive branches in malls, airports, retail stores, pharmacies, and other locations where something beyond an ATM will prove useful.

At one point Harris points his smartphone at the mini-branch and changed to a different bank account on screen. Instantly the branch rebrands itself, changing accent colors, logos, and more all around the installation.

In this way the same bankerless office could serve as a shared facility, giving multiple providers a presence where the responsive branch is placed. Banks have not gone in for shared offices, as some credit unions have, yet the Diebold concept is more like a banking machine, and banks have shared ATMs and ATM networks for decades. 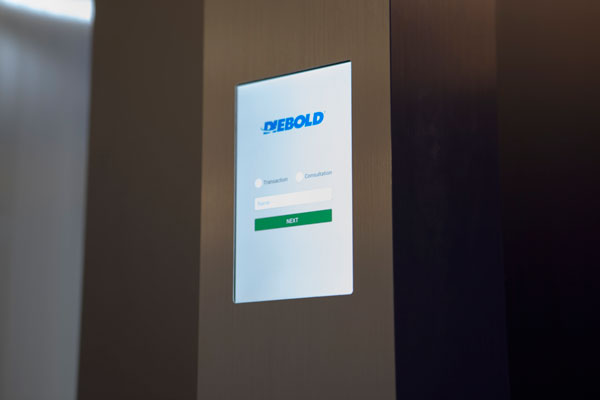 There is no denying that the responsive concept is cool. To anyone raised on any edition of “Star Trek,” much of what the user sees is familiar, but finally possible.

But is everyday America ready for an unmanned bank branch that recognizes you, may know before you arrive why you are coming, and which may even interact with digital assistants like Apple’s Siri to be ready to help you when you arrive? (The photo above is what a person with "reservations" could see when they arrive.)

Celent’s Meara, senior analyst, says a few years back, the typical consumer’s reaction would have been, “Are you kidding?” But in a day of Skyping, Facetiming, and more, he doubts that any of this is too far ahead of what many consumers will accept.

“Consumer preferences are changing at a pace never seen before,” said Meara.

Some elements of the responsive concept may require some adjustment, he allowed. Beacons that a customer is expecting aren’t beyond consumers’ comfort level, but Meara says, more generally, that beacons that are covert may take some getting used to. He suggested that a secret beacon message to a live banker that a high-balance customer has just walked into the office—and that greeting that person is priority #1—could leave some customers a trifle unnerved.

The etiquette of such tools still needs to be figured out, says Meara.

Regarding sharing such unmanned multipurpose branches, Meara believes credit unions will cozy up to the idea first. Credit unions’ experience with sharing offices has been cheaper than independent geographic expansion, he says, but credit union executives still complain about the costs. For them, adopting the unmanned approach has big appeal.

Meara doesn’t see commercial banks getting comfortable with the idea as quickly, as sharing of offices hasn’t caught on, unlike networks of cash machines.

But that may well change, he says, as consumers’ increasing interest in self-service grows.

Meara adds that Diebold’s approach to the responsive concept—many elements which can be amended, redesigned, evolved, and adjusted—represents a significant change for banking suppliers. For many years, he says, technology companies had a “here it is, take or leave it” mindset, but clearly the responsive concept’s own design is, well, responsive.

View a Diebold video about the responsive concept on Youtube.