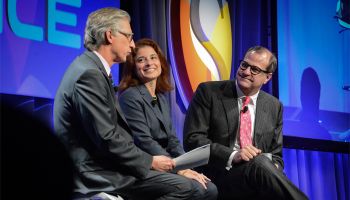 Are banks dinosaurs or have they been evolving? CNBC's Bob Pisani, left, probed this at Exponential Finance 2015 with RBC's Linda Mantia, c., and JPMorganChase's Gavin Michael, r.

If you are of a certain age, you may remember the “bobo doll.” This was an inflatable clown, boxer, or super hero with a weighted bottom designed to take punches and kicks from children. No matter how hard the blow, the toy would right itself, ready for the next hit.

In fact, if you bopped it too hard, a bobo doll just might nail you on the nose.

At last week’s Exponential Finance conference, sponsored by Singularity University, CNBC, and Deloitte, the banking industry was often the conference speakers’ bobo doll. For two solid days, the industry was taking hits from futurists, developers of financial apps, bitcoin enthusiasts, and even a bank executive or two who had “gone native” or “true believer.”

So, towards the end of the conference, when it was the turn of two bank executives to have their say, it wasn’t surprising when emcee Bob Pisani of CNBC sparred a bit with his two banker panelists.

Questions for the “dinosaurs”

Speaking first to the audience, Pisani, host of  “On-Air Stocks,” said, “You’ve heard for two days from some very innovative companies about how they are going to disrupt the financial services business. How does financial services feel about all this?”

Then Pisani directed himself to Gavin Michael, head of digital at Chase Consumer & Community Banking: “Gavin, do you know you’re a dinosaur?”

“We have 20 million customers who will log into our bank over the next 30 days,” the banker said, making it the most-visited bank portal in the U.S. The bank’s app has garnered over 7,500 reviews, he added. And every month, customers average more than 7 visits.

The subtle message may have been, watch out for the dinosaur you criticize. He may have bigger feet than you realize.

“I knew you weren’t really waiting for the world to disrupt you,” smiled Pisani.

Chase’s Michael said his organization is very focused on meeting and anticipating the needs of customers in a whirlwind of technological advancement. Pisani asked if the bank was going to buy disruptive players, and Michael said that Chase seeks out the same brains those competitors hire.

Ultimately, he said, it comes down to this: “Customers want to see friction go out of [the financial services] experience.” Translation: We get it.

Co-panelist Linda Mantia, executive vice-president at Royal Bank of Canada for digital, cards, and payments, said that traditional banks know well that they must adapt to customers’ expectations.

“We can’t fight it. We have to just do it,” said Mantia. “Our customers don’t want to think about it or talk about it. They expect it.”

Mantia also made it clear that her organization sees the urgency of the disruption challenge.

“Bankers will have to be in the stream where their customers are,” she said. “They won’t come to us.”

At the speed of light … and secure

That said, Mantia responded to Pisani’s observation that her title included cards and payments.

“People want to interact with their money all the time,” she said, but she added that there is considerable concern about security of transactions as channels become more ubiquitous and technology based. She noted that one of the key patent areas that RBC pursued when launching into mobile banking was security-oriented. The bank believes its mobile channel adds security beyond that enjoyed in other channels.

Indeed, Mantia felt that American banking is especially “ripe for disruption,” because in some ways this country’s diverse and dispersed industry is behind the times internationally. She pointed out that chip and pin technology has only now begun to advance in this country, when it has long been adopted elsewhere. Concerns about fraud finally drove adoption here of chip cards replacing 15-year-old technology.

Michael said that the banking industry has been working with newer technologies such as tokenization, and yet it was Apple Pay that brought this to market in a significant way.

What being a bank is about

“It’s pretty exciting,” said Mantia, referring to today’s rate of change, and the advent of big data and other game changing technologies. “It will help us get to know our customers better.”

Both Mantia and Michael resisted the “untouched by human hands” tone that some of the disruptive speakers had taken during the conference, however.

“I think the future will be going back to the past,” said Mantia. She said she believes that for banking to merely create means for customers to do everything via “self-serve” would be a mistake.

Michael said that technology should help banks use their capabilities better and “get to serve our customers better.”

“For us,” continued Michael, “it is all about how we create a deeply personalized experience. We’re trying to use data to show that we know who you are.”

Mantia said that too many banking customers still live hand-to-mouth, and she hopes that technology will help banks improve their customers’ lot. For example, she hopes that customer alerts—growing in purpose and sophistication—could help people avoid fees, such as for overdrafts.

During the question-and-answer period, one listener gave something that was more of a challenge than a question. Pisani summarized it as “With all the new services out there now, why do I need a bank at all?”

“For the same reasons you have today, plus extra reasons on top. A bank is a place where your money will be securely held. We will provide advice, to help you reach your goals, whether it’s for your mortgage, savings for your children, or savings for your parents.”

And it will all be wrapped up in an experience that the customer will find valuable and attractive, she predicted.

The questioner came back with more of the same, and Pisani boiled that down to this: “You guys don’t get it. We don’t need you.”