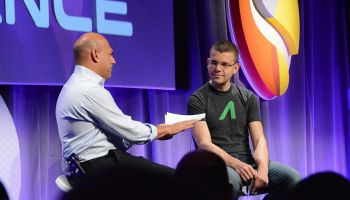 Max Levchin, r., co-founder of Affirm, tells moderator Salim Ismail that he wants “to build a bank from the ground up.”

“We’re going to build a bank that doesn’t suck.”

As you might guess if only from that quote, Max Levchin doesn’t like the traditional banking system.

When asked where he planned to take Affirm, a small-loan startup he co-founded, that was his answer. He told attendees at the recent Exponential Finance conference that he plans to turn Affirm into “a bank for the 21st Century. We’re going to build a bank from the ground up.” The conference was sponsored by Singularity University, CNBC, and Deloitte.

Levchin—a co-founder of PayPal, chairman of Yelp, former vice-president of engineering for Google, and more—formed Affirm to be a credit source that was “honest, fair, and transparent.” These are three things he does not believe typify traditional banking.

He also intends to build Affirm on the latest technology.

Levchin noted that many banks rely on legacy systems that still run COBOL, a programming language created in 1959.

“Most people who know how to program in COBOL are nearing retirement,” said Levchin, “or are dead.”

Levchin frequently attacked banks’ capabilities in his session. He said that the virtual currency blockchain, much discussed as a means for rapid and cheap financial transactions, was not a good fit for Affirm. However, he said it was a much better fit than banking’s own “pipes.”

“Once you are in the ledger of any large banks,” said Levchin, “you won’t settle until 5 P.M.”

Affirm is a smart-phone-based way of paying at point of sale for purchases from a couple of hundred to a couple of thousand dollars.

Levchin characterizes the service as credit for buying a first couch or pair of night tables. Affirm loans represent an alternative to credit cards, which can’t be obtained by many of the millennials to whom the company markets, as well as an alternative to payday loans and similar sources.

Purchasers apply for short-term personal loans as they attempt to purchase the goods at participating merchants. (They can apply for an Affirm account in advance or in the course of making the purchase.)

The Affirm service enables the company to perform a quick credit evaluation based on some key information, such as cell phone account, date of birth, the last four digits of the Social Security number, and social media data. (Sometimes the applicant will also be asked to grant access to their checking account balance and transaction information.) This is followed up by a more detailed check should a purchase be made, performed while the merchant processes the order.

The fledgling consumer lending service may expand beyond retail in time, to small business lending, Levchin indicated in answer to a question from moderator Salim Ismail. Ismail, a former executive at Yahoo, is a global ambassador for Singularity University.

Making small business loans would work somewhat differently than the consumer blueprint for today’s Affirm, Levchin speculated. For example, he suggested that the company might look at the Yelp ratings earned by a small business as compared to similar businesses. A café, for instance, might have higher customer satisfaction scores in Yelp than another café and thus that could be considered a plus that could contribute to credit approval.

Levchin also suggested that there could be more interaction between Affirm and its business customers’ banking accounts or accounting records. For example, he suggested that records could be set so Affirm could see when receivables were entered on a company’s books.

Levchin said this could serve as a prompt to Affirm to proactively offer financing based on those receivables, enabling the small business to have access to the cash prior to receipt. The funds would be advanced to the borrower at a discount by Affirm, in a manner similar to factoring.

How a disruptor thinks

The admiring moderator brought up Levchin’s reputation as a successful human idea machine, reflecting on how many companies he’s started or had a hand in starting.

“For every good idea I’ve had, there are a couple of dozen bodies that were failures,” Levchin answered, “terrible ideas that no one’s, hopefully, ever seen.”

Levchin said that at the Exponential Finance conference itself, he had had ideas in the course of listening to presentations. One that excited him when he thought of it had already become a loser, in his mind, by the time the presentation was over.

He said he tries to pursue only those new ideas that pass his “HVF” test:

• H stands for “hard”—the concept has to be something that others aren’t attempting, because it is difficult.

• V stands for “valuable”—the concept has to be not only interesting, but something that can make someone’s life better.

• F stands for “fun”—Levchin has to feel passionately about the concept before he’ll spend his time on it.