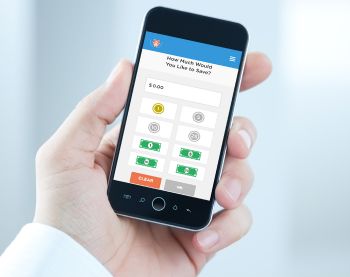 Saving for a rainy day is a common concept, but actually doing it has become not so common. In the first six months of 2015, the U.S. personal savings rate hovered at only 5% of personal income. To encourage customers to save more, banks continue to roll out incentives and programs.

Many of these initiatives center around online tools and apps, which automate savings and make tracking expenses easier. These are popular with millennials.

“It’s natural when you’re talking about behavior change—which for many of us is what saving really amounts to—to take advantage of that ubiquitous object in your pocket that you develop a very strong relationship with,” says Timothy Flacke, executive director at Doorways to Dreams (D2D) Fund, a not-for-profit, financial innovation shop. “There’s a big potential there.”

SmartyPig is one such tool. The free, goal-based program offers users an online savings account with competitive interest rates to help save for a specific target. It offers online and mobile versions, and allows users to connect their accounts with social media platforms like Facebook and Twitter. This enables friends and family to provide moral and even financial support. When a user reaches his goal, he has the option to put his money on a retailer gift card with a cash-back percentage bonus.

User deposits are held at BBVA Compass, which had been seeking to dive into the digital banking space through a partnership with a financial technologies company. “SmartyPig was the best choice because they had exhibited the ability to really grow deposits online,” says Susan Hooten, product manager at $81.7 billion-assets BBVA Compass in Birmingham, Ala. “Also, their demographic was a younger group of folks.”

According to Hooten, BBVA Compass believes the digital aspect and “the convenience of being able to touch that account and see exactly what’s going on at any time” attracts that younger group.

BBVA Compass also gains brand awareness from bank logos and products advertised on the SmartyPig website and is able to build relationships with users.

The digital aspect isn’t the only thing that makes tools like SmartyPig popular. The program succeeds in eliminating the drudgery of saving by making it fun.

“So often, money issues for much of the population are really a negative, painful place,” says Flacke. “If you can do something to flip that on its head, you start off with a huge advantage in terms of building people’s trust and helping them to make thoughtful choices.”

D2D first came across prize-linked savings accounts in other countries, and after some observation and research, decided to bring the concept to the United States. In 2009, the company ran a pilot program in Michigan called Save to Win with eight credit unions. (Credit unions were selected as having fewer legal hurdles than banks.) The pilot was a success: 11,500 people opened accounts in 11 months and saved $8.5 million.

Save to Win has since expanded to other states, and the overall cumulative savings from 2009-2014 is over $115 million from 53,589 account holders.

“The product appears to have very broad appeal,” says Flacke. “We do see a lot of evidence of people who do not report that they were previously savers, so we think that’s quite encouraging.”

Here’s how the prize-linked savings accounts work: A customer earns a raffle entry every time he deposits a certain amount of money each month. Institutions can cap the number of monthly entries. Lotteries are held monthly and annually for cash, gift cards, or other prizes.

After the success of the pilot, D2D worked with advocates to remove the legal hurdles preventing banks from offering lotteries. The American Savings Promotion Act (H.R. 3374), which removed federal prohibitions on banks’ involvement in lotteries, was passed and signed into law in December 2014. Now the practice is determined on a state-by-state basis. Currently, 15 states allow banks to offer prize-linked accounts.

“Our CEO Brian Plum just really caught on to the idea,” says Ann Mann, chief compliance officer at Blue Ridge Bank. “It’s a way to entice Americans to actually save money for a rainy day, as well as to build goodwill and grow the bank’s core deposits. I think most community banks are having issues growing core deposits because of the competition out there. We saw it as a win-win situation for both consumers and for the bank itself.”

Blue Ridge Bank’s program offers account holders one entry for every $25 deposited, with no caps on monthly entries. Four $50 prizes and one $200 prize are raffled monthly, with a $5,000 grand prize raffled at the end of the year. Blue Ridge Bank pulled the cash for the raffles from its advertising budget.

In the program’s first month, the bank opened 15 accounts. “I do believe it’s going to be a little slow to take off. People feel this is too good to be true, or ‘What are banks doing, getting into gambling?’” says Mann. “I can foresee it building some real momentum later in the fall, given that we are heavily promoting the product; and then in December, our grand prize is $5,000.”

D2D hopes that other banks will follow Blue Ridge Bank’s example. “The challenge is really making sure that banks especially understand this as an opportunity,” points out Flacke.

Class is in session

Much of the battle around getting people to save more—especially millennials—is that they haven’t been taught how. To address this knowledge gap, D2D offers financial education tools in the form of a library of casual video games that teach a discreet set of financial skills.

On the savings front, the Bite Club game allows users to save for retirement while running a vampire day club. Farm Blitz challenges players to manage farm resources to build savings and survive financial emergencies.

“Ultimately, game play is really puzzle solving, and if you think about trying to help people learn, you want them to be enthusiastically trying to solve the puzzle,” says Flacke. “That’s a learning space where your brain is activated in the right way, as opposed to on the receiving end of some sort of information delivery.”

Northwest Savings Bank also offers a number of educational tools on savings, including its MyNorthwest Connections newsletter. “It’s our goal, through efforts like this, to encourage customers to make informed decisions to help improve their financial well being,” says Melanie Clabaugh, communications manager at the $7.9 billion-assets savings bank in Warren, Pa. “Using easy-to-read paper and digital formats, we deliver insightful content, and better connect customers to products and services that will help them today and in the future.”

Similarly, BBVA Compass offers customers information on savings and budgeting via “MoneyFit,” an online “financial fitness center” that is populated almost daily with new content. “It grew into a larger communication initiative for us to give voice to helping people understand how to take better control of their financial lives,” says Tuck Ross, senior vice-president of digital marketing at BBVA Compass. “It’s performing above what our expectations are. And we do share that content on our social media channels as well, including Facebook and Twitter, to help make sure that it’s as widely viewed as possible.”