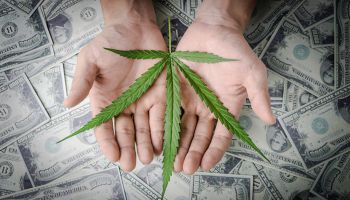 More financial institutions are servicing the marijuana industry, but depositories have terminated 5,650 accounts at an increasingly rapid clip. The data shows incremental improvement for a previously locked-out industry, but the gains are not keeping pace with the industry's exponential revenue growth.

Between June 2016 and September 2016, U.S. financial institutions terminated roughly 8.8 accounts per day, up from a rate of 7.5 terminations per day from November 2015 to May 2016. At the same time, the number of depositories servicing the industry has increased 15.6% year over year.

S&P Global Market Intelligence received the data from the Treasury Department's Financial Crimes Enforcement Network, or FinCEN, via a Freedom of Information Act request. Account terminations are highly disruptive to any business.

"Operations come to a screeching halt. It affects your payroll, your ability to pay bills. … In many cases, the banks will report this activity to law enforcement," said Lance Ott, CEO of Guardian Data Systems, a compliance provider for marijuana businesses. 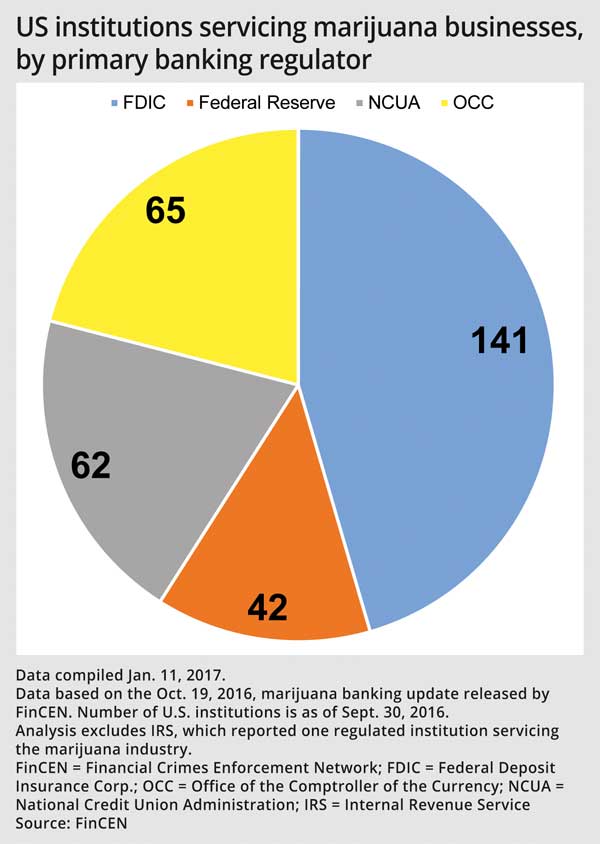 Banks conflicted over compliance and more

President Barack Obama's administration attempted to encourage depositories to service the industry with guidance issued in February 2014 that the Justice Department would not pursue prosecutions as long as a marijuana business adhered to eight priorities, such as preventing sales to minors.

Lawyers said the guidance was insufficient, especially since a subsequent administration could revoke the guidance and retroactively prosecute a financial institution.

Jeff Sessions, R- Ala., president-elect Donald Trump's nominee to lead the Justice Department, suggested in a Senate hearing he would not prioritize a marijuana crackdown but also said Congress should change the law if it does not want the Justice Department enforcing it. While the sale of marijuana remains illegal federally, eight states have legalized marijuana sales for recreational purposes, and 29 states have legalized sales of medical marijuana.

Overall, the FinCEN data shows 311 financial institutions servicing the marijuana industry as of September 2016, up from 269 institutions a year ago but down slightly from a July peak of 319. Marijuana businesses have reported modest improvement in access to banking services but have complained that their options are limited and expensive, generally restricted to small community banks or credit unions. The FinCEN data show 585 financial institutions serviced marijuana companies at some point, suggesting 274 depositories no longer have ties with the industry. 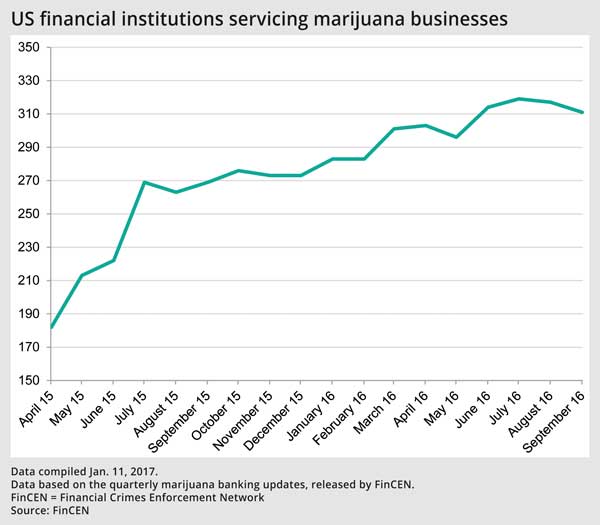 "They are getting a bank account, but they have no confidence that six months from now that they'll still have it," said Taylor West, deputy director of the National Cannabis Industry Association.

While 311 financial institutions might seem like a lot, it represents just 2.6% of the 11,867 depositories in the U.S. Also, the data does not specify a minimum number of accounts, so a bank servicing just one marijuana client would be included.

"Some banks have opted to keep a client because they've been a long-term customer," said Sundie Seefried, CEO of Partner Colorado Credit Union, a credit union that openly services marijuana businesses. "So while they're not openly doing it for the industry, they have one or two people for whom they do it. So a lot of that 311, I believe, are those types of relationships."

Seefried said a group of marijuana-servicing depositories has identified only 36 institutions in the U.S. that openly bank the industry. Seefried said her credit union has 101 marijuana accounts and employs 10 full-time compliance officers to oversee those accounts. Her credit union processes $60 million in marijuana cash per month, which she said is near the institution's maximum capacity considering it has just $300 million in assets.

"We certainly can't bank 100% of Colorado cannabis. It's just too much money for us to watch," she said. Marijuana sales in Colorado exceeded $1 billion in the first 10 months of 2016. 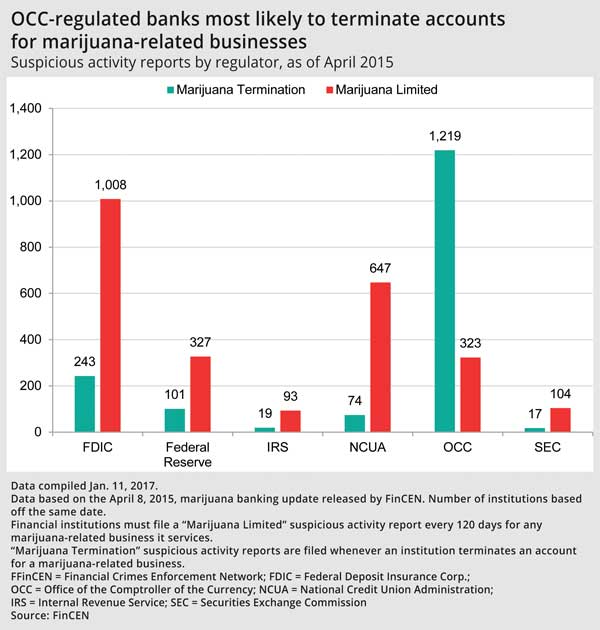 Large banks have the most resources to service the industry but have generally denied playing any role. The American Banker reported Jan. 11 that several marijuana companies applying for a license in Massachusetts listed bank accounts with the nation's largest banks, including Bank of America Corp., JPMorgan Chase & Co., Citigroup Inc., and Wells Fargo & Co.

But Ott and Seefried said the largest banks refuse to openly service the industry and are responsible for the majority of account terminations. An April 2015 report broke down terminations by regulator, and banks regulated by the Office of the Comptroller of the Currency, or OCC, accounted for 73% of all terminations while its banks accounted for 21% of institutions servicing the industry. The OCC regulates all four banks with more than $1 trillion in assets and 23 banks with at least $50 billion of assets. The OCC declined to comment.

The FDIC, which oversees most community banks, and the National Credit Union Administration, which regulates credit unions, reported the largest numbers of "marijuana limited" filings, which depositories must file when servicing a marijuana-related business.

"If a credit union decides to serve a marijuana business, that's a business decision for that credit union. NCUA will expect that credit union to have performed the necessary risk analysis and put mitigation plans in place to address that risk," said John Fairbanks, a spokesman for the NCUA. A spokesperson for the FDIC declined to comment. 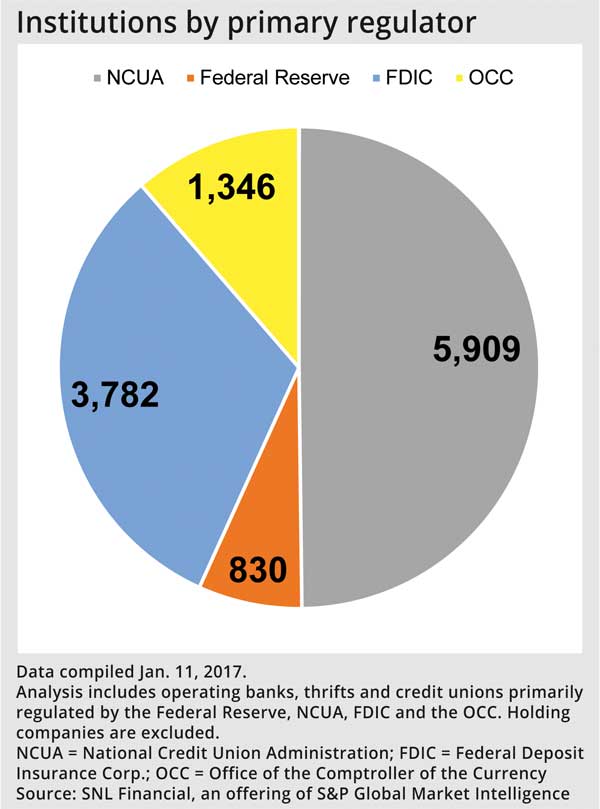 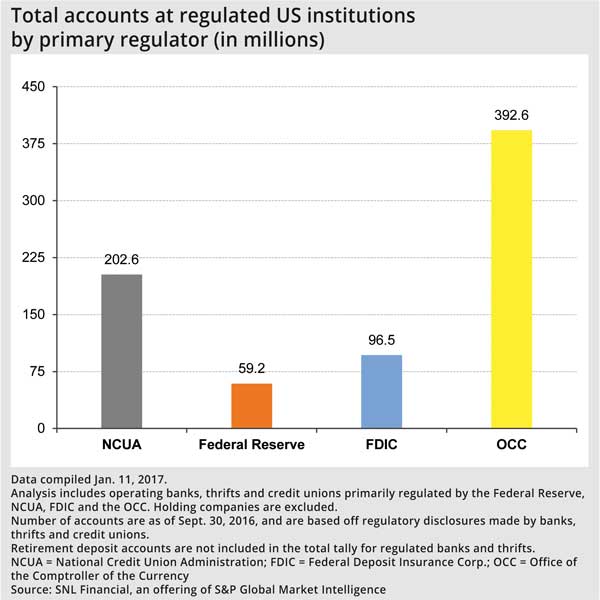 Banks continue to hang back

The problem is only going to exacerbate as four states—California, Nevada, Maine and Massachusetts—voted to legalize recreational marijuana in November 2016, but Seefried said the largest banks remain three to four years away from servicing the industry. Arcview Market Research, which focuses on cannabis industry, estimates marijuana sales totaled $6.7 billion in 2016 in the U.S. and Canada, projecting the market will triple to $20.2 billion by 2021.

"We're taking a $40 billion market that we think exists today and moving it into the legal column," said Tom Adams, editor-in-chief of Arcview. "It's not an industry where you have to create demand."