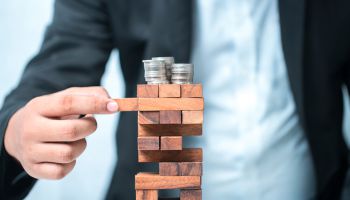 My career as a workout officer began nearing midway in my years as a banker, when energy prices collapsed in the early 1980s. I was in Midland, Texas, then, in the middle of the oil field known as the Permian Basin—one of the historically most prolific oil fields in the lower 48 states.

I arrived in Midland when oil prices were $29 a barrel, headed for $41.

No one’s talking much about problem loans lately. We’re climbing out of one of the worst recessions of the last hundred years. The new administration of President Trump has a great deal of promise with its high hopes of a business tax cut, curtailment of regulation and bureaucratic rules, and the possibility of a lessening of the compliance-related impacts of Dodd-Frank.

Our operating environment, the “C of Credit” relating to Conditions, is generally favorable and improving. So it’s no wonder that problem assets are not top of mind.

They may already be in your portfolio

My own experience as lender, credit administrator, workout manager, and regional bank president tells me that problem loans lurk in both external business conditions as well as our skills and discipline as underwriters of credit.

But does one source of credit risk tend to predominate over the other?

I can’t answer that precisely. But I’d hazard an educated guess that the sources of risk are about equal.

Certainly, tendencies to be sloppy in the application of the Five Cs of Credit can lead to lots of sub-standard credit or worse. And a conservatively managed bank generally does not do significantly better or worse than businesses in its trade area.

I used to work for a man who said, “You can’t run a bull market bank in a bear market.”

Well, you can, of course.

But things will end badly.

Essentials for a strong portfolio

What nearly 50 years in the business has taught me is that without strong internal controls, an acceptable level of credit quality is simply impossible over time, regardless of how strong the initial underwriting and approval process is.

Most everyone identifies essential controls to include:

• A well-run credit approval system with its own feedback loop.

But that’s not a complete list. Internal credit controls also include:

• The process of credit training.

• The administration of the details of credit (financial statement analysis, exception tracking, etc.) during the time of the borrower’s repayment period.

• An internal communication system that provides the entire credit staff information and feedback on the general conditions within the bank’s marketplace.

I raise these questions now at this point in the business cycle to remind lenders and credit administration staffs of the problems that are sown during periods of “good” business.

Are we watching borrower performance carefully?

Do we have the same sharp eye for deviations or trends during the amortization periods of our credits as we exercised in our run up to approvals and initial funding?

Many banks do, of course. But there is a tendency in recent years, since the depths of the Great Recession, to believe that our risk aversion has been great and that little if any weak credit made it into the portfolio.

At the same time, many community and small regional banks have struggled to contain costs with an eye particularly to eliminating salary burden where possible.

Perhaps the training budget has felt the pinch as well and maybe we have squeezed and cut too extensively or with less discrimination for what we need over the long haul and not just the exigencies of the current quarter.

Tussling for the next loan

The size of the lending pie has been slow to expand, unlike our experiences following other post-World War II recoveries. GDP growth has been slow but is now improving more briskly. Are our attentions sufficiently focused on our existing loans? Or are we scouring the landscape for new credit opportunities and plotting how we might poach good credit from our competitors?

Too often in recent years I have seen credit extended based on price and terms, both categories being used sometimes very aggressively for competitive advantage.

The twin siren calls to our borrowers of rock-bottom pricing and a liberalization of amortization periods and related non-financial terms has got to be creating subtle sorts of credit exposures of their own sort.

I think that there are enough positive elements at work in our national and regional economies to shield us from a harsh correction. But even a gentle relaxation of historically traditional credit terms can generate some unwanted and unwelcome surprises.

I urge all to sharpen their banks’ 360 degree perspectives and pay careful attention to what an X-ray of your portfolios—were that literally possible—might show.

Get some institutional memory, somehow

Many practitioners who lived through the days of the S&L crisis; the energy downturn of the 80s; and the business recession of the 1990s have retired or died. They aren’t available to share their advice and counsel with the current generation of bankers. Even our own direct work experiences since 2008 may not be able to tell us very much about what to expect or what to be looking for.

Any business that conducts almost all of its business with someone else’s money has to be cautious. That’s the generally unstated warning of the current day.

Let’s enjoy the lift of an improving economy and a new “can do” business attitude in Washington. But let’s not forget: Many credit problems develop following the underwriting and funding of the loans.

I sense that few are thinking about this source of potential mischief.

More in this category: « What do we make of our new environment? Revealing the faces of risk »
back to top