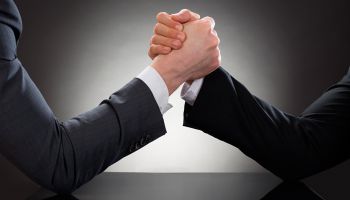 Forethought when your bank enters into technology contracts can be one of the best solutions when your bank needs to terminate a relationship early, later on. But additional steps can make the termination-end arm wrestle a bit more fair.

As banks merge, eventually driving system integration, or decide to replace their existing core systems, a thorny and sometimes contentious issue arises: What types of contract termination and conversion fees will they face? And how can these fees be negotiated?

Successfully answering these questions can mean substantial savings to banks. That success hinges on understanding what’s involved, how fees specifically apply, and what leverage the bank might bring to bear.

“This can be such an unknown, moving into an acquisition or moving into a conversion,” said David Saylor in a recent webinar. “It can become a point of contention between a bank and its vendor.” Saylor is president and founder, Genesys Technology Group. Computer Services Inc. sponsored the webinar.

Saylor explained that he sold core technology to banks for about a decade before setting up his own company several years ago.

“I thought banks were at a disadvantage” during negotiations, said Saylor. “Technology representatives and technology companies do this every day, while banks do this maybe once every five to seven years.”

In the past five years, Saylor said, he has seen significant changes in the market dynamics that affect contract negotiations. These include:

• Consolidation in the banking industry through mergers and acquisitions—proceeding “at incredible speeds now.”

• A proliferation of open-ended contracts that “a lot of times allow free rein for vendors to raise prices.”

• Banks that are in a hurry “and do not recognize the exposure.”

As a result, he says, termination fees “have become a profit center for some vendors.”

Saylor listed five most-common types of termination fees and explained what banks need to understand about each and what types of negotiating strategies they might employ.

Every vendor and every contract is different, so the advice is general.

“This is not one-size-fits-all, but if you have these things on your radar, you will be able to set yourself up to be better covered and to make sure your bank is not exposed to exorbitant fees,” said Saylor.

Fee No. 1: Liquidated damages. This is the cost to liquidate a contract early.

Most contracts default to 100% of the average fees over the remaining term, although this varies by vendor. For example, say the bank is in month 30 of a 60-month contract which requires payments of $10,000 a month. On that point alone, the bank would owe $300,000.

However, he said, such provisions “are always negotiable in advance.”

Banks should know that while the industry standard is 100%, the industry best would be 50% after negotiation—and vendors are accustomed to negotiating, according to Saylor.

One important nuance bank negotiators should pay particular attention to, he said: “Always watch out for language that says ʻThe greater of…’ Your radar should go off. You need to understand it and all angles in different scenarios and then negotiate that language to where it is the least costly to your bank.”

Fee No. 2: “Deconversion” fees. This is the cost to convert to another system.

The charges can include migrating data from the old system to the new; project management; and conversion of legacy data.

One red flag to watch out for: Anything that says “optional services.”

“These are not always really optional, so you need to fully understand what they entail,” Saylor said.

“These are negotiable,” added Saylor, “but probably the most complex and time intensive to tie down. However, they are totally worth it to do.”

In general, the bank must request a formal deconversion estimate for services covered under the agreement; know the difference between required optional services; tie the estimate or schedule to the agreement; make sure it negotiates two test data transfers and one live data transfer; and negotiate a cap on all fees in the relationship that covers all services.

“You have to ask the right questions,” Saylor says. “You have to understand the estimate they are putting in front of you. Be persistent. Be aggressive.”

Fee No. 3: Holdover clause. This is the cost to run the old system at the end of contract’s conclusion, while the new system has yet to go live. Think of it as the “tween” time.

Typically, Saylor says, the vendor charges a premium up to 25%. And this may not be explicitly spelled out in the old contract.

However, Saylor said that vendors typically have a policy or standard practice that relates to requesting a month-to-month grace period.

“Determine if this is covered in your contract,” he advised. “If it is silent, understand your vendor’s policy. Spell this out in the agreement. If it is 25%, negotiate the premium to 10% or 15%. More important, negotiate a grace period of 90 to 120 days on the end of your agreement.”

In addition Saylor said that it is best if the holdover clause is located in the master agreement and governs all exhibits and schedules that otherwise could be scattered in an inch-thick contract.

Fee No. 4: Clawback clause. When the original vendor provided incentives at the renewal or onset of a new contract, this clause allows the vendor to collect their value in the case of an early termination.

Generally, the clause defaults to 100% of such incentives, Saylor said.

Banks need to keep a sharp eye on this, as associated language could be spread out over many exhibits and schedules for each product and service covered by the overall contract.

“It can be a nightmare to make sure you’re not missing something in a 190-page document,” he said.

In response, he advised, “You want to attempt to amortize the repayment of incentives over the term of the agreement.”

For example, if the incentive is worth $150,000, and you want to terminate in month 48 of a 60-month contract, by amortizing over the remaining contract period the bank would pay a fraction of the original value.

Fee No. 5: Past due amounts. In general, a bank does have to pay all past due amounts owed at the time of termination. Contracts generally include disputed bills in this, however. As a result, a bank’s data can be held hostage if they are not all paid.

“This is pretty straightforward,” Saylor said. “If you owe money, the money is due in order to get deconversion assistance.”

That said, however, Saylor recommends creating language in the agreement that allows for the release of files if disputed billing is unpaid, but otherwise is up to date.

“Carve out any disputed fees—there are errors in billings that happen all the time.,” said Saylor. “It can take months to resolve.”

Saylor provides this checklist to identifying and negotiating contract fees:

• Never accept a verbal quote or estimate on your own.

• Understand the estimate through a discovery session with the vendor and applicable business unit managers.

• Identify areas where fees can be reduced—and then ask for a reduction.

• Understand the number of [data transfers] you will need.

• Most important: get a guarantee in writing from the vendor that says that this is all there is.

“Be aggressive and persistent,” Saylor emphasized. “Before you finalize pricing, create the space you need to get it done right and never allow yourself to be in a hurry to get it done.”

Listen to an archived version of the webinar [Registration required]