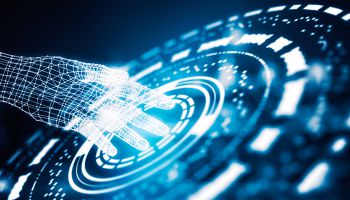 Ask Seacoast Bank’s Jeff Lee about the digital revolution in community banking and he’ll give you two examples.

First, when a question arose about what the maximum next-day availability should be on the bank’s mobile check deposit service, staffers did not survey other Florida banks’ practices, a typical bank response.

Instead, they combed through the bank’s database for data to indicate what customers were actually doing with their transactions and then looked at the relative risks of differing maximum levels. They concluded they could raise the level to a higher point at no appreciable additional risk.

Says Lee, chief marketing officer and head of external relations: The bank tailored its decision to its risk profile and its customers’ needs, using data in hand.

The second example from Lee concerns another aspect of remote capture, “classical” business remote capture, performed with bulk check scanners in customer offices. From time to time, the bank identifies a business customer who still sends someone with a package of checks for an over-the-counter deposit, and targets them for a sales outreach.

If you said “remote capture,” you went for the obvious choice. More significant: A combination of data and observation helped identify situations where $4.7 billion-asset Seacoast National Bank, Stuart, Fla., could bring digital services to bear on a customer pain point.

Lee is a big believer that digital services have grown in importance to customers. But when he speaks of them, he doesn’t treat them so much as game-changing innovations, but more as essential, ongoing additions.

“It’s become pretty clear that the expectations customers have of other industries are creeping into everything,” says Lee. “Today, customers expect your bank to be available on demand. They expect you to be able to get them whatever they want, at any time they want. And those expectations will continue to ratchet up. This works out to be not so much a digital story, but a customer story.”

Lee leads the bank’s marketing, customer experience, business analytics, and investor relations areas. He came to the bank four years ago after a ten-year stint at American Express and experience directing digital marketing and analytics at other companies.

Two observations hit him as he settled in at Seacoast.

First, he had access to a wealth of customer data, both current and seasoned, from the bank’s files. As a smaller bank with a single core provider, Seacoast offered clean data that someone with his background could dig into.

Second, the cost of the digital tools available to do that digging, and for acting and promoting on the basis of what was learned, had fallen drastically.

“I saw that many contracts for top-flight software are priced by number of accounts, which meant that I wouldn’t have to ask for millions to obtain it,” says Lee. He says the bank spends about $28,000 a year for cross-selling software and $15,000 a year for analytics software.

This represented a lining up of digital planets for Seacoast. As the bank added more sophisticated digital services, it could compete with the larger players coming to dominate Florida banking. And it could revise its approach to marketing those services and the remainder of the bank’s menu using digital tools for analysis and outreach.

Perhaps one of the biggest challenges is to approach this veritable data feast with the attitude of a selective gourmet.

“You can have all of the data in the world, and it can be clean,” says Lee. “But you have to know what you are solving for.” And there is one more critical factor. Amid all the hard tech and hard data, there is a critical soft center: bank culture. 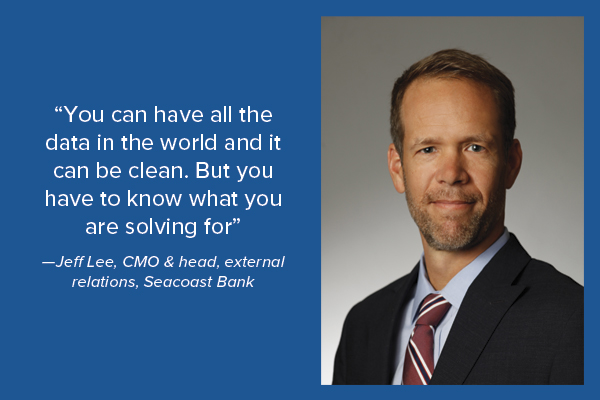 If a bank does not make a cultural transition along with a technological one, Lee says, “it won’t work.” Seacoast has been fortunate because with an employee base of approximately 800, “you can spend time communicating the ‘why’” of changing tactics and approaches.

With the ability to dig deep into the bank’s data to analyze the status quo, and to spot and predict customer needs, Lee says the day of the regularly scheduled promo has passed. “What we are not about anymore is, ‘It’s April, so it’s time to do our HELOC promotion’,” he explains.

Now, analytics will surface a need that can drive an automated campaign that manifests itself in different ways through each channel. Outreach may take place through cued reactions to inbound calls; via outbound calls targeted to that customer; through in-branch suggestions; through selective email marketing and direct mail; and tailored messages on ATM screens, in online banking, and on mobile devices.

Thus, an owner of a company with a line of credit that lies untapped may be reached along any of those paths. Lee says software enables the bank to automate about 40 campaigns at a time.

Data drives the message. And urgency lies behind the effort.

“We want to be reaching out before another bank gets them,” says Lee. He gives this example: It may be noticed that veterinarians appear to have a particular need. An offering can be tailored for vets and delivered through the most appropriate channels. For Lee, the sell is all about the intel.

No bank has infinite resources, so part of the increased use of analytics concerns prioritization. Lee says the bank tries to use data to see where it is applying too many resources to serving a segment or customers who represent low potential. Conversely, the bank may find that it has been devoting inadequate attention to a segment that currently provides little return, but could become more significant to the bottom line.

For Seacoast, CLTV—Customer LifeTime Value—is a critical method for estimating what potential a customer has and how much it can afford to devote to reaching and serving that customer.

When Lee arrives at work, he reviews the bank’s customer portfolios to see how things are progressing. And he spends time on the administrative side of the bank’s website. He likes to keep up with the number of leads, leads converted to enrollments, and other metrics .

But he maintains that a key part of the bank’s growing success with its digital efforts comes back to people. As digital services increasingly take up the burden of routine transactions, that frees up human staff for a different day of work. In place of rote work, more of a front-line banker’s time is taken up by troubleshooting, problem-solving, and consultation.

Understanding what’s going on up front, firsthand helps. Lee says the bank’s head of retail has served as a teller several times to get a personal perspective. “It was eye-opening,” he says. But it wasn’t like an Undercover Boss episode. With 800 staffers, everybody pretty much knows what the head of retail looks like.