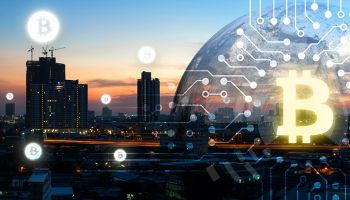 Bitcoin is just the tip of the blockchain iceberg, but many banks aren't even heading to the Arctic Circle yet.

“He who hesitates is lost.”

Increasingly, the applicability of blockchain technology to the banking business has become recognized, yet, in recent research by the technology consulting firm Cognizant, less than half—48%—of the 1,520 financial services firm officials surveyed in North America, Europe, and Asia said that their companies had scoped out a blockchain strategy.

Only 39% said that their companies had set up the internal policies and governance for bringing the firms into the blockchain age. And only 42% of the respondents told Cognizant that their organizations had figured out which elements of their operations would be affected by blockchain technology’s implementation.

What makes these findings even more surprising is that very few respondents described themselves as blockchain newbies. Nearly a third—29%—consider themselves experts, at least in understanding blockchain. Many—43%—describe themselves as proficient, 20% as competent, and only 8% as novices.

The understanding is there, for the most part, of what the blockchain implies for banks and other financial services businesses.

But what’s lacking is action. Many companies apparently haven’t committed to much more than dipping their toes into the blockchain pool, if that.

Change is inevitable, success is not

Varghese is assistant vice-president and leader of Cognizant’s blockchain and distributed ledger consulting practice, and one of the authors of the report, Financial Services: Building Blockchain One Block At A Time.

Varghese explains that there is much hanging back, with financial companies hesitant to move into blockchain much beyond experimenting around the edges, at most. She traces much of this inaction or indecision to concern about the changes that will come as blockchain technology, its application, and the ways of participating in this world evolve.

The consultant believes this is an error, because further evolution of the young technology is inevitable. Better solutions will come along in time.

But to be in the game in time means getting into it now, not later, or an organization risks being left behind, Varghese believes. By its very nature, blockchain technology is a shared affair. “Blockchain is not something that you have within your own four walls,” she explains. Treating the decision solely as a intramural matter ignores this. 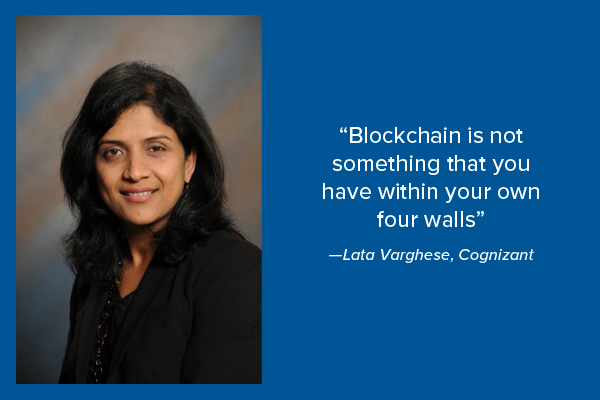 The survey report notes that many firms content themselves with learning about blockchain and perhaps trying some internal proofs of concept. They await more focus in the marketplace.

“But waiting for clarity before moving forward is not a viable option,” the report states. “To ensure they are not left behind, firms need to move quickly to determine how their business strategy can leverage blockchain, build the required capabilities into their business processes and technology systems, and become comfortable with collaborating on project with external partners, customers, and even competitors.”

Varghese compares the fledgling blockchain with the early days of the web. Who can list all the ways the operation and utilization of the internet has changed?

“If people knew some the things they know now at the outset, they would have done some things differently, right?” says Varghese. But things had to start somewhere.

In the report, Cognizant makes it clear that the firm recognizes that a great deal of hype remains in the blockchain world—fintech in general spawns that. Many benefits down the road beckon, but plenty of hyperbole must be sorted through.

“While it’s important for firms to move aggressively on blockchain, they should do so with their eyes open,” the analysis says. However, the report also states: “The risk of doing nothing is greater than the risk of doing the wrong thing.”

Time is moving fast here. Varghese noted that U.S. financial firms are behind many other countries’ institutions, overall, though some large players have done much. About a third of respondents were in North America. However, plenty of other companies elsewhere are also hanging back.

Yet the survey found that many see the urgency—even if their companies aren’t acting on it. When asked how soon blockchain technology will gain prominence, 44% expect this to happen within one to three years, in private blockchains, and 40% have the same expectation for public blockchains. Only a small portion of respondents see blockchain becoming important further than five years off.

Why strategy ranks so high

Cognizant’s report recommends looking ahead to how blockchain technology will fit their 2020 plans—not to lobby for delay, but to stress the need to be thinking that far ahead while acting in the present.

“Firms that remain stuck in the planning phase face the prospect of being left behind as their more aggressive competitors capture an impregnable first-mover advantage,” the report says.

Critical to understand here is the nature, as described by the report, of the competitive side of the blockchain. In a sense, one can view it as a sport. For a baseball team to excel, other teams must be playing ball—you can’t win the World Series if there aren’t any leagues with teams to play and a common set of rules to compete under.

The report acknowledges that one blockchain setup might be more efficient than another, and an institution could be in a better competitive position if its choice of blockchain is superior in some significant way to a competitor’s choice. This underscores the study’s point about gaining experience while it’s still early days.

This point brings in another aspect from the study. Beyond the competitive impact, there will also be a change to business models. Old ways of doing things may be replaced by blockchain-oriented methods. While three out of four respondents think blockchain technology could increase revenues, two out of three answering the survey worry that “disintermediation facilitated by the blockchain will have either a significant or moderate adverse impact on their firm.”

The survey warns that moving too slowly will expose financial companies to new competition—“the risk of being usurped by technology providers offering financial utility models.”

“Blockchain will rewrite the rules of competition in financial markets,” the report states.

Barriers to getting started

No organization can hope to implement blockchain technology without assembling a broad range of internal skillsets, according to the report. The size of teams put together by institutions moving forward varies somewhat by the type of financial activity the surveyed organization offers. As the chart below shows, custodian banks tended to have larger teams in place than other types of institutions surveyed.

Once the organization determines to move forward with active participation in blockchain efforts, Cognizant recommends against IT leading the effort. This may seem counterintuitive, given blockchain’s technical nature. However, the firm’s point is that blockchain projects should be driven by a business purpose or goal and that business units should be involved from the beginning.

“When business stakeholders are not involved in blockchain projects from the get-go, implementation can be delayed, and buy-in can suffer,” the study says.

While teamwork will be critical to keeping up, Varghese notes that companies that are serious about blockchain technology must assign some staffers to acquire deep knowledge of the matter. Merely having lots of people building shallow knowledge by reading industry news clips won’t do it. 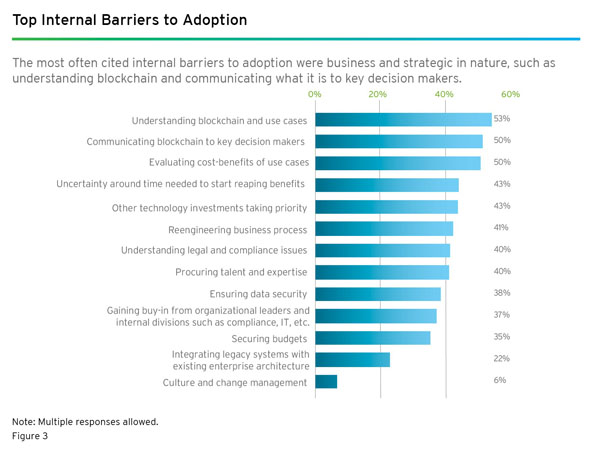 Respondents were asked about the leading internal barriers to adopting blockchain technology. The top three issues cited were:

1. Understanding the technology and its application to the organization.

2. Communicating about blockchain technology to key decisionmakers (the study found that top executives tended to be more optimistic about the adoption process than were managers closer to the actual work of implementation).

3. Evaluating the cost-benefits of use cases.

The smallest concern cited is actually one of the key stumbling blocks, in Cognizant’s view: culture and change management. Only 6% of the sample chose this issue. Adopting blockchain technology will very likely mean major upheaval in an area being brought over to it, the study says.

“Firms drastically underestimate the substantial challenges of managing the changes that blockchain will require,” the report states.

Communication between company functions is key to the transition, according to Varghese. That, and education.

“Otherwise it really would be herding cats,” says Varghese.

“It needs everybody doing a bit more of what they traditionally did,” she explains.

Varghese notes that there’s a misconception about blockchain technology that she compares to the way some people think of self-driving cars. While the technology in both cases clearly will change the way things are done, not everything will change. With cars, for example, roads and vehicles must still be maintained. With the blockchain, many IT functions such privacy protection must still be carried out internally.

“Somebody still has to run the network,” says Varghese.

Again, referring back to the baseball league analogy, a key point Cognizant makes is that financial institutions must come together on blockchain.

“Blockchain’s greatest benefits will come from industry-wide networks,” the study says. “However, getting there at scale may prove difficult in an industry that does not traditionally embrace collaboration.”

Cognizant’s research found that while two-thirds of the officials surveyed say their firms are cooperating with other firms or industry groups 56% also say that working with partners or fellow “ecosystem members” is a major impediment to adopting blockchain. 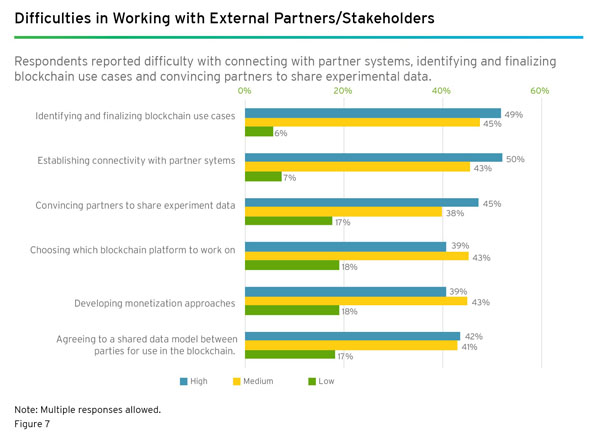 Among the barriers cited by respondents are reluctance to share experimental data and concerns about connecting with partners’ systems.

Varghese thinks bankers have to get over this kind of thing, or they will find themselves being dictated to.

“If we collaborate,” she says, “we can control our own future, instead of letting things just happen to us.” Indeed, when asked if she sees smaller institutions taking a decisive role in blockchain’s development, she suggests they face a choice. If they spend some money now to be active, they can have a role in their future. Otherwise, they will be riding only on the shoulders of what the largest banks do.

Banking has had its fads and its own taste of the madness of crowds over the years. Is there a risk that something out there—the blockchain is only a very recent arrival on the scene—could eclipse this currently hot technology?

Varghese doubts that. “It may look different,” she says, “but I don’t think that this is going to go away.”

So, after talking about the need to get on board and the need to find ways to collaborate internally and externally, what’s to be gained? The survey examines that as well.

Nine out of ten respondents see blockchain technology as critical or important to their companies’ future. And 48% believe that the technology will transform the industry.

As the figure below shows, there are many expected benefits, with anticipated results often coming in quite significantly. 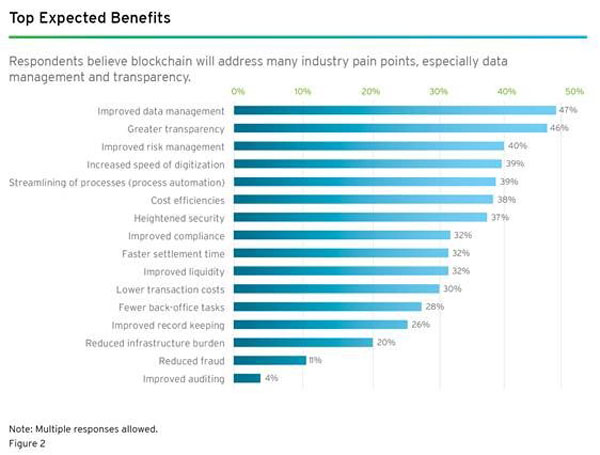 Varghese believes that banks that make the commitment today will realize such advantages.

“All of this is hard work,” she adds.

Download Financial Services: Building Blockchain One Block At A Time 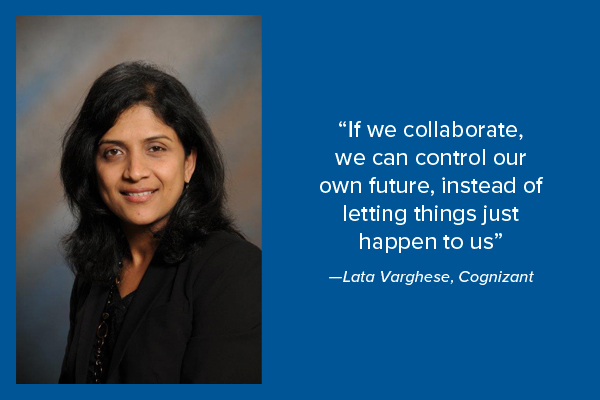