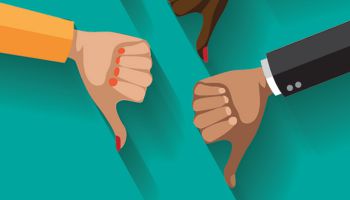 Banks can learn a lot from complaints, but at the end of the day you also want unhappy customers to become satisfied customers.

Increasing emphasis on customer experience heightens the importance of complaints management, because experience tanks quickly if the customer gets angry. As important as that is, however, complaints are also a risk management issue. A trend in complaints may drive regulatory attention—or worse—and savvy managers with strong complaint management systems can usually see the trends early on. In particular the presence of such compliance hot buttons as fair lending, CRA, and UDAAP can sometimes be spotted amid customer complaint trends.

Unfortunately, isolated attempts to improve customer service can backfire. Take the situation of the involved CEO who likes to have an open door. Such leaders take pride in allowing customers to surface beefs to them personally—and some consumers believe the route to an instant solution is to write to the bank’s top official. This can drive unintended consequences, in spite of the good intent.

Speakers at a session on complaints management at the Regulatory Compliance Conference of the American Bankers Association discussed this problem earlier this year.

When a CEO or other top executive surfaces a customer complaint in an email to staff, employees naturally snap to. The result can be lots of people working on one issue, pointed out Barbara Boccia, senior director, advisory services and regulatory relations at Wolters Kluwer.

Executives should take complaints seriously, said Carol Hunley, deputy chief compliance officer, enterprise compliance and regulatory affairs at Ally Financial. “But it sends the wrong message if it goes out to everybody.”

One unfortunate side effect of such an “all hands” effect is that a customer whose complaint draws executive involvement may get the works—but not everyone with a similar problem necessarily gets that same level of attention. And that can prove troublesome when complaint resolutions are reviewed later on.

Hunley pointed to good-will waivers of fees as one example. What if others who didn’t get that treatment fall into protected groups?

The speakers didn’t use the term, but the concept of “disparate impact” certainly comes to mind.

This issue of executive involvement differs from the practice in complaints management of “escalation,” which is to bring significant complaints to the attention of management, versus empowering front-line and lines-of-business staff to handle lesser issues.

Boccia pointed out that call center personnel and other front-line employees who often first field complaints frequently have their service speed formally measured as a routine matter. Their bank employers set standards because they want to make sure employees are working efficiently—customers like fast service.

However, Boccia continued, what about the customer for whom English is a second language? The ideal time that the bank measures the employee’s performance against may be insufficient to the length of conversation that may be necessary to resolve such customers’ questions or needs.

Such examples illustrate the importance of formalized complaints handling systems, discussed at length by the panel. Complaints handling can be chock full of gray areas until banks begin to track complaints, analyze trends, and search out root causes. Detailed administration, training, tracking, and more all go towards ensuring fairness in handling individual complaints and ultimate resolution of customer issues.

Complaints also represent a good barometer of the bank’s customer base. “They can tell you what your customers are feeling and what they are thinking,” Boccia explained.

On top of these factors is CFPB’s own public consumer complaints database, available online. The database, which CFPB began building in mid-2011, contains hundreds of thousands of records, including company names and narratives provided by consumers (though not verified by the bureau regarding specifics). Complaints filed through the portal are referred to the providers involved.

Banks “have to be a lot more proactive now,” Hunley said. The public can review the database and CFPB issues a variety of reports based on reviews of its data.

Speakers explained that those reports and the database itself can be a helpful tool for institutions. One use is to identify common areas of complaints that can guide banks to business areas that bear some scrutiny. A trend seen in the national numbers can prioritize areas where a bank might spot weaknesses before they become a major challenge for their own operations.

“The bureau is giving you some clues,” said Boccia. “You really need to pay attention to that information.” The bureau publishes its “top ten” ranking of complaints by area, which she said flags areas to keep on top of.

“These records can inform your UDAAP risk assessment and your general risk assessment,” Boccia said. The database structure can be used as a model for building a bank’s own complaint tracking system.

Some complaint trends deal with specific product issues and some with third party issues. Boccia noted that some complaints can even be indirect. In the mortgage area, for example, some consumers simply complain that a mortgage lender has sold their loan to a company that they would prefer not to do business with.

“We have a category in our system called, ‘customer misunderstanding’,” said Hunley.

Such issues may not indicate that the bank has erred, but studying them can still have value. “You need to see if there is an opportunity to embellish and enhance your processes,” said Boccia. In some cases, the bank may find that something in its marketing communications should be revised to prevent future customer misunderstandings, for example. Alternatively, analysis may flag the need to explain something that has not been communicated in the past.

Clearly, said Boccia, if an issue has been raised, “it may not have worked for that customer.”

Overall, the panel warned against complacency. Learn from other companies’ issues, even if they haven’t surfaced at your own bank.

A matter of definition

Panelists stressed the need for training, and refresher training on top of that. A mantra in complaints handling is “report, research, and resolve,” but an essential at the beginning of the process is to define clearly what constitutes a “complaint.”

At Ally, an expression of dissatisfaction or any statement implying a regulatory issue are classified as complaints, according to Hunley.

Some situations can be pretty easy to define, said Jennifer Mazurek, senior vice-president and director of audit and compliance at Camden (Maine) National Bank. She said that when an employee hears such trigger phrases as “I’m going to call my lawyer”; “I’m going to sue”; or “I’m going to go to your regulators,” it’s pretty obvious that there’s a complaint, especially if this is being shouted in the bank lobby.

But other remarks, while valuable to pass on to responsible employees, aren’t “complaints” per se. One example: “Your office hours are really inconvenient for me.” Mazurek said such remarks were more examples of “feedback.”

Mazurek said employees can be assisted by providing them with a tip sheet. A sample she showed the audience included these examples:

• “I was charged a $5 paper statement fee and I am enrolled in electronic statements.”

• “I was told by my loan officer, in their office, that I was approved for my mortgage loan, and I received a denial notice in the mail today.”

• “I received a credit card in the mail and I never applied.”

Responding to complaints that require a written response is no time for employee freelancing. Panelists recommended the use of templates for written responses, using standardized segments, and with the suggestion that responses be kept short and to the point. Mazurek said that at her bank such responses are reviewed by Compliance before they go into the mail.

Devising and maintaining a strong complaints handling process should be regarded as on ongoing project. Banks may find over time that complaint categories need refinement or expansion. Employees need to be able to classify complaints that don’t fit established categories, as well.

Analyzing trends in complaints requires interdepartmental cooperation. Hunley described a complaints committee instituted recently at Ally that is headed by the CEO, and which includes representatives of many functions.

Boccia suggested that banks consider geocoding their complaints records. In this way the analysis of complaint trends can identity situations where there may be differential treatment going on in specific offices versus the rest of the bank.

Panelists also stressed the importance of including IT in the complaints management process. Complaints surface in both traditional channels and newer ones, including social media. Tracking everything across a bank can be challenging.

“Anyone here have an integrated system that does it all?” Hunley asked listeners. Not a hand went up.

She wasn’t surprised. “I don’t know if we will ever get to the point of capturing everything we want to capture.”

But a key task for Compliance is bringing a picture of complaints trends to the bank’s board. There’s a balancing necessary here to demonstrate clearly what’s going on without pulling directors off into the weeds.

In closing the session, Hunley capped the panel’s emphasis on the need to know clearly what is going on:

“Use the access and opportunity you have to help you capture and interpret your data, so you can tell your story—others will pay attention to your data whether or not you do.”