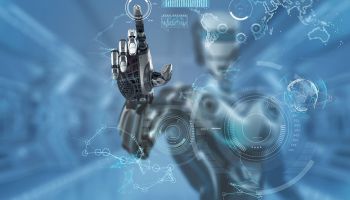 This was a big deal.

Microsoft CEO Satya Nadella, in his keynote address, came closest to including financial services in his company’s purview of futuristic technology solutions, grouping it with retail, manufacturing, health care, and education industries, as well as government.

Getting past the tech hoopla

“There isn’t a single industry that isn’t being transformed,” Nadella said. “We collectively have the opportunity to lead in this transformation.”

Exactly how requires some intense parsing of the mountains of releases, blogs, and commentary that flowed from the conference. Also, it requires some research regarding what yet more technical jargon really means. Examples: Intelligent edge, mixed reality, and quantum computing. (See below.)

Still, what can be derived is the potential for accelerated uses and easier applications of artificial intelligence in fields such as security, marketing, data analysis, and disaster recovery.

Much of this has yet to actually be applied to banking, though. The news here is, the tools to do so now have become more accessible.

It starts with the familiar Microsoft Office suite. A contributor to Forbes magazine, Janakiram MSV, observes: “Microsoft is committed to embedding AI into almost every new product and service. Microsoft Excel has got new formulae for performing predictive analytics in the cloud. Powerpoint has got a translator that can translate presentations in real time. Word is all set to have a new spell checker and grammar tool that goes beyond the basic correction.”

That’s just the start. Microsoft announced the next generation of Azure Machine Learning (AML, and not in a money laundering context, necessarily) with three new capabilities for developers to exploit. Briefly, these are:

• AML Workbench, intended as a cross-platform client for AI-powered data wrangling and experiment management. [There’s another tech term. “Data wrangling” is generally defined as the process of cleaning and unifying messy and complex data sets for easy access and analysis.]

There’s more. Microsoft announced upgrades to Microsoft Cognitive Services. The first is the general availability of the Text Analytics cognitive service that provides advanced natural language processing over raw text. Second is that the Bing Custom Search function will be generally available in October, which lets developers create their own web search engine without coding.

More on the AI front

These are just some of the AI-related announcements coming from Microsoft itself. A slew of other companies also announced partnerships or collaborations with Microsoft, some of which involve AI and relate to issues of interest to bankers. Here’s a sampling:

• Accenture, Avanade, and Microsoft will collaborate on a multi-year, multi-million dollar project to develop, integrate, and bring to market enhanced cyber defense solutions.

• RSA and Trusona, in separate partnerships with Microsoft, also will boost their respective multifactor authentication applications that could be added to the Microsoft Azure Active Directory Premium.

No doubt there are many more such examples, now and to come. In sum, they point to the increasingly imperative of digital transformation, and the transformation of technology itself.

Some fresh techspeak from Microsoft

By the way, here’s how Microsoft defines some of the new tech jargon it uses:

• Intelligent edge—the process where data is analyzed and aggregated at a point close to where it is captured in a network.

• Mixed reality—the result of blending the physical world with the digital world.

• Quantum computing—Massive parallel computing capabilities derived from the fact that a bit in a quantum computer, called a qubit, can be 0 and 1 at once, holding two bits of information at the same time.

(This latter business relies on producing a topological qubit that involves electron fractionalization. Don’t ask. Just understand that Microsoft sees huge potential with quantum computing, to the point that it has developed a new domain-specific programming language optimized for exploiting scalable quantum computers. No doubt those developments will dominate future Microsoft Ignite conferences.)

Read John Ginovsky’s “Making Sense Of It All” blog every other week—including his periodic special columns devoted to keeping up with current tech terminology.