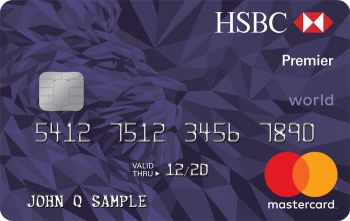 Among the gaps Pablo Sanchez and his team filled in at HSBC was credit card offerings. A metal card—the HSBC Premier World Elite Mastercard—was just introduced for a key segment: people who travel regularly, particularly to and from the Far East and Europe to the U.S. East and West Coasts.

It was notable that a 152-year-old global bank held a media event at the bustling fintech-dominated Money 20/20 conference in Las Vegas to talk about progress in the transformation of its formerly sleepy retail business.

HSBC Bank’s presence at the event was part of a growing banking presence at a show dedicated to strutting the stuff of the burgeoning fintech industry—particularly as related to payments.

One estimate put the banker portion of the 13,000 total attendance at about 40%. As recently as five years ago, few bankers attended. Other banks with large contingents included Wells Fargo, JPMorgan Chase, Bank of America, and US Bank—many of them exhibiting as well as attending.

HSBC has weathered some difficult issues since the financial crisis. With those problems largely behind it, management sought to upgrade and grow its retail business here. It brought in Pablo Sanchez, as Head of Retail Banking and Wealth Management for HSBC Bank USA. Sanchez previously was head of JPMorgan Chase’s branch network, where he had led a transformation effort.

Over the last two years HSBC USA, with total assets of $192 billion, has invested $130 million in upgrading its 228 U.S. branches, including the installation of cash handlers and new ATMs. [The $2.49 trillion-assets parent company has 3,900 branches around the globe.]

In addition to overseeing that change, Sanchez overhauled the retail bank’s product set. The bank was heavily weighted toward mortgages, he told a group of reporters, and had several gaps in its product line including credit cards and consumer lending.

At the conference HSBC launched its newest card product, a metal card called the HSBC Premier World Elite Mastercard. The card is targeted to a key customer group for the global bank: people who travel regularly, particularly to and from the Far East and Europe to the U.S. East and West Coasts, where HSBC has its largest presence.

In an separate move as part of its retail transformation, the bank shifted responsibility for small and midsized businesses from the Commercial Group to Retail/Wealth Management.

HSBC has winnowed out a handful of extraneous branches in recent years, but committed resources to keeping the rest viable.

Sanchez says branches are still important—for now—because customers still value them. Many people still choose a bank by the proximity of a branch, he says. That will change, he added, but for now many people still value face-to-face conversations, and even still like putting their money in “the fortress down the street.”

One thing Sanchez feels strongly about: “If you’re going to have a branch, it should be a full-service branch. People aren’t going to pop into their car or take the subway” to go to a place with one person and a video kiosk where they could have done the transaction on their phone or at home, says Sanchez.

He points to the success of the Apple Stores, which provide a sense of community for that brand and a place to see and touch the products and get advice. In fact, the bank has been considering a new, 5,300 square foot branch in Cupertino, Calif., home to Apple Corp. In keeping with his focus, Sanchez points out that the location will be “more about banking than coffee.” 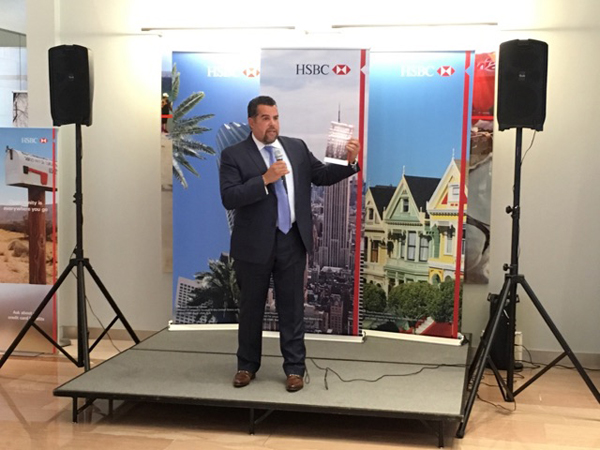 Pablo Sanchez joined HSBC in 2015 from JPMorgan Chase to reinvigorate the international bank's retail and wealth management businesses in the U.S. and Canada.

Beyond upgraded branches, HSBC is currently piloting a video banking service that customers can access from home, says Sanchez, and has partnered with several fintech companies.

“Providing customers service when and where they want it is a competitive advantage,” he maintains.

Already rolled out is voice identification of call center customers. It’s an option, Sanchez notes, but already is outperforming the password as a way to identify a person.

Once set up, the authentication occurs completely in the background. Sanchez says that authentication is successful 90% of the time using just voice ID versus 80% for authentication by password, in which people frequently give the wrong password.

Sanchez notes that banking, generally speaking, is not broad minded enough in shaping the customer experience. “People do other things in their lives,” he says, noting that one of the things he checks every morning is his Amazon recommendation list.

Picking up on that point, Jeremy Balkin, HSBC’s Head of Innovation, and an author of a book on millennials (being one himself), says, “Our competition is our customer’s last best customer experience.” He adds that the retail customer bank account is the most important thing—any nonbank service provider must be connected to those accounts.

On the theme of banks’ eventual obsolescence, Sanchez is adamant: “This idea that banks will go away is ridiculous.”

He agrees with Balkin’s point that fintechs need banks’ accounts in order to succeed, adding that they don’t need (or want) banks’ price/earnings ratios.

There are some bankers, says Sanchez, who say about their institutions, “We’re a tech company, not a bank.” Sanchez responds, “That’s nuts. We’re a bank.”

In an interesting historical note mentioned during the briefing, the U.S. operation of what was once known as the Hongkong and Shanghai Banking Corp., actually has older roots than the parent company. HSBC entered the U.S. in a big way with the acquisition of Marine Midland Bank in 1980. The U.S. bank had been founded in 1850 whereas the Hongkong and Shanghai Bank was founded in 1865 to finance and facilitate trade between the Far East and the United States.