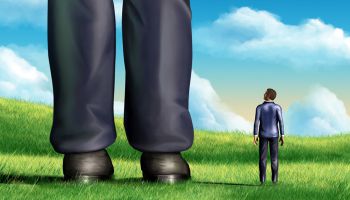 BofA execs and others gave fintech startups a sense of how new technologies come aboard at megabanks at a recent tech seminar.

Big banks have deep pockets and deeper challenges. Fintech companies have fresh, innovative solutions. It sounds like an ideal match, like two puzzle pieces that so obviously fit that problems can be solved in no time.

One reason may be that the fintech has a great solution, but doesn’t really understand how to fit it into the existing banking framework.

Bank of America Merrill Lynch’s Simon Goddard told startups and other fintechs at the company’s recent New York City Technology Summit that they should always hire someone who knows the problem that the company’s solution purports to solve.

Goddard gave an example. Many fintechs have been working on solutions to improve payments. Yet they frequently don’t have anyone on board who came out of any aspect of the payments business. Lacking that hands-on understanding, they’ll face a tougher road to success, he said.

Some of the companies working in the blockchain field illustrate this shortcoming, Goddard continued. They have some interesting ideas, but they don’t have anyone on board who knows how to make their pending solutions integrate with the multiple payment rails that already exist.

“The key for any of you working on payments is interoperability,” Goddard told the fintech audience.

Mine the gold—don’t expect to mine too much

Part of the idea behind the tech day is to help fintechs, typically smaller firms, to better understand how to sell to giants like BofA. That’s also a mission of Maria Gotsch, president and CEO at Partnership Fund for New York City, which partners with financial services companies and Accenture on the Fintech Innovation Lab New York.

Gotsch gave the fintechs some perspective on the banking business, a crash course in understanding where banks are versus what they are used to.

Prior to her speaking, BofA Merrill’s Ather Williams, head of business banking, had given the audience a figure shocking in the context—the company is still relying on mainframe computers that are over 40 years old.

“We are probably the single-biggest user of mainframes after the U.S. government,” Williams admitted.

Playing off Williams’ point, Gotsch said that megabanks “can make startups want to tear their hair out.”

First off, she said, they are huge, and don’t function like agile fintechs. Beyond that, fintechs used to functioning in the cloud will face unfamiliar ground dealing within a mainframe environment.

“The banking industry is on its way to the cloud,” said Gotsch, “But there is only a very small group of companies who are completely in the cloud.”

Fintechs that want to work with big banking companies must be willing to venture onto their ground, technologically and quite literally, said Gotsch. She said fintechs needed to offer big banks on-premises solutions if their services come anywhere near the behemoths’ data.

“Their data is the equivalent of their gold,” said Gotsch. She added, that “they are regulated, and you as their vendor are regulated.”

No small fintech is going to get its arms around all the potential business that its specialty could gain from a huge bank client, Gotsch said.

“It’s important to find your entry point,” she advised. “It’s the old ‘land and expand’.”

She suggested fintechs concentrate on building strong relationships with someone in a big bank client. In part this can be done by providing solutions that can be easily tested, and the trust between bank and fintech built up step by step.

“We want to kick the tires of things that have value to us,” agreed Williams.

Gotsch told fintechs not to underestimate the power of relationships in this area. “Though these are huge firms,” she said, “the financial services market is shockingly small.”

Gotsch also had advice for large banks that wish to work with fintechs. One point was to think of fintech partners as banks’ outsourced research and development arms. “That changes the conversation,” she explained.

Gotsch said that banks, focused so strongly on their regulatory obligations, can gain something from fintechs: a fresh perspective.

“What a lot of startups are bringing is a very customer-centric orientation,” said Gotsch. “Banks are highly regulated and no regulator has ever asked a bank, ‘Are you creating a great customer experience?’”

Bankers, used to long schedules, need to put themselves in fintechs’ place to better understand their peculiar forms of angst.

For example, delays can be a killer, according to Gotsch, for a small company.

Once a bank is on a fintech’s radar, the investors backing it will not be patient. They will call frequently for updates—have negotiations succeeded? Has the contract been signed?

“Time is money—but time is really money for a startup,” said Gotsch, “because they are burning cash.”

Her advice to bankers from large banks who must hit the road for weeks at a time: “Sign the contract before you fly to Asia.”

Goddard agreed. “Regtech is something we are spending a lot of time and money on.”

He said that his organization, globally, has had to field over 300 regulatory changes worldwide already through this point in the year. They not only have to be analyzed, but also weighed for potential contradiction with rules in other jurisdictions where the bank does business. The organization may have months to adapt, or perhaps only weeks. This illustrates the compliance challenge.

“We spend tens of millions of dollars just keeping up to speed,” said Goddard.

“Buy or build” decision for BofA

In a separate panel, a “fireside chat” about partnering with fintechs, two executives discussed how they decide what to develop in-house and what to tap partners for.

Aditya Bhasin, head of consumer and wealth management technology at Bank of America, said that the organization prefers to concentrate most closely on aspects of technology that can most improve the client experience. So, he said, this would mean obsessing—his word—about how well BofA’s Erica digital assistant answers a particular question. That’s a “build” decision, most likely. By contrast, finding the ideal software to convert voice to text is something a search of outside offerings can likely solve.

One advantage to buying, Reilly pointed out, is that fintech vendors work with other banks, and BofA can benefit from the learning done with other clients.

He said small vendor firms shouldn’t hesitate to offer constructive criticism to an organization like BofA. He said he appreciates it when a supplier suggests that the bank is veering too far to the left or right, based on its experiences elsewhere.

“Don’t get intimidated that you are coming to visit a big bank,” said Bhasin in agreement.

A warning to developers from Bhasin is that security is a major concern for any new software. He said that security must be built into the solution that the vendor is offering. A security measure overlaying the solution isn’t sufficient for a major player like BofA.

In a similar vein, both bankers expressed appreciation for vendors who are realistic and straightforward in their dealings with the bank.

Reilly advised against the temptation to try to offer too much. “Not trying to spread yourself too thin is a real hallmark of someone who is very different,” he said.

In marked contrast to an oft-cited fintech “MO”—iterative development with frequent updates—Bhasin warned against rushing something to prospective clients before it is ready. Inadequacies will out.

“An overpromised proof of concept that fails is much worse than saying, ‘Let us come back to you in six months when we’re ready’,” Bhasin said.