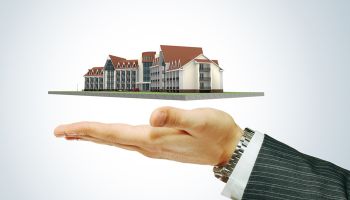 A handful of banks received bid sheets to buy divestitures that will result from KeyCorp's pending acquisition of First Niagara Financial Group Inc., a deal that would result in some highly concentrated markets in upstate New York.

Pittsfield, Mass.-based Berkshire Hills Bancorp Inc. received a bid sheet but did not bid on any branches and does not intend to, according to spokeswoman Ali O'Rourke.

Hamburg, N.Y.-based Evans Bancorp Inc. did not receive a bid sheet, but is interested in growing in markets affected by the merger. "We absolutely have an interest," President and CEO David Nasca said in an interview. Evans Bancorp is trying to win business organically now, but will consider buying if there is a resale in the future. "They're going to sell it to one player—there's one bank that will buy everything, and then if that bank wants to resell to reduce its exposure, we would be interested in that," Nasca said.

Impact on the community

Cleveland-based KeyCorp announced plans to acquire First Niagara on Oct. 30, 2015, in a $4.1 billion cash-and-stock deal. In late December 2015, the Federal Reserve extended the public comment period on the deal by a month, to Jan. 31.

In weighing a merger, the Fed considers the impact on the public convenience and need and weighs the banks' Community Reinvestment Act records, said Ronald Glancz, the chair of Venable LLP's financial services group who formerly worked at the OCC and the Department of Justice. In its merger application, KeyCorp noted that it has received eight consecutive "outstanding" CRA performance ratings by the OCC. [Editor’s note: A recent three-part series on this website addressed CRA, including potential changes to its role in the M&A process.]

The OCC, which regulates KeyBank NA and First Niagara Bank NA, received more than 50 comment letters on the merger. Almost all expressed opposition to the deal. Many commenters were concerned about the impact on New York communities and competitiveness in the merger's markets. Some said the merger should not go through until KeyCorp submits a plan "demonstrating a clearly significant public benefit."

New York Gov. Andrew Cuomo wrote to the Fed, OCC, and DOJ, urging them to reject the deal on the basis of competitiveness concerns. "Key Bank's acquisition of First Niagara will, by any objective measure, further limit the ability of Upstate New York consumers to access the financial services and products offered by banks," Cuomo wrote. "This will likely push consumers to rely on non-bank alternatives, such as payday loans and check-cashing, which come with higher consumer transaction costs." His letter also highlighted potential negative impacts on the community, including job losses and branch closures.

In an emailed statement, KeyCorp spokesman Jack Sparks noted the company's commitment to communities in upstate New York and said KeyCorp looks forward to working with Cuomo and his staff to address the concerns. The Fed received many comment letters from community groups and nonprofits in Ohio (as well as some in New York) voicing support for the deal and highlighting KeyCorp's dedication to local communities.

KeyCorp's president and CEO, Beth Mooney, addressed opposition to the deal during the bank's earnings conference call in January. She said KeyCorp has been diligent in reaching out to community leaders and has held very constructive discussions. "[W]e are obviously in the process with the Department of Justice, who will make the determinations on the divestiture numbers, and working through our plans and our progress. And I think we will be a good and significant partner, and good for those communities and those customers," Mooney said. KeyCorp also acknowledged in its merger application that it expects to consolidate certain branches, and to divest certain others in the Buffalo, N.Y., area.

"There are ways of working this out so that competition is preserved," Glancz said. 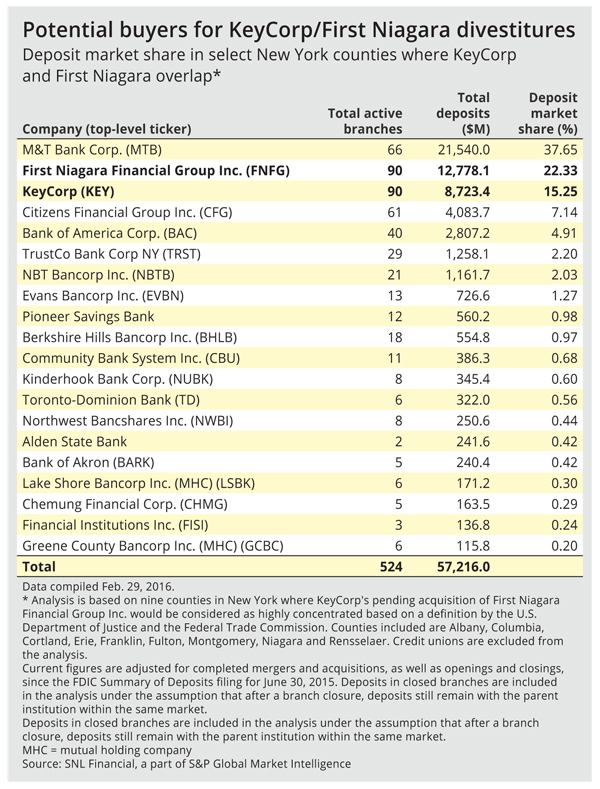 Regulators consider the Herfindahl-Hirschman Index, or HHI, when weighing the competitive effects of a merger. For example, the Buffalo market has an HHI score of 3,157; this would jump by 434 to 3,591 following the KeyCorp-First Niagara merger, according to an analysis based on the FDIC's June 30, 2015, Summary of Deposits data. The DOJ defines any score in excess of 2,500 as "highly concentrated."

Guidelines from the DOJ and CFTC state that the higher the post-merger HHI and increase in the HHI, the greater are the potential competitive concerns and the greater is the likelihood that the agencies will request additional information to conduct their analysis. An analysis by S&P Global Market Intelligence found nine counties in New York that would be considered highly concentrated based on these guidelines: Albany, Columbia, Cortland, Erie, Franklin, Fulton, Montgomery, Niagara, and Rensselaer.

Some other banks with a presence in these markets, such as De Witt, N.Y.-based Community Bank System Inc. and Glenville, N.Y.-based TrustCo Bank Corp NY, declined to comment on their interest in the divestitures.

The DOJ declined to comment on the KeyCorp/First Niagara deal specifically. But in 2011, the agency weighed in on another bank merger in upstate New York: First Niagara Bank NA and HSBC Bank USA NA agreed to sell 26 branch offices in the Buffalo area to resolve antitrust concerns from the sale of HSBC's branch network in upstate New York to First Niagara. Without those divestitures, the DOJ said the acquisition would likely have had an adverse effect on competition in the Buffalo area for retail banking or small-business banking services. First Niagara ultimately sold these branches, plus some additional New York locations—to KeyCorp. 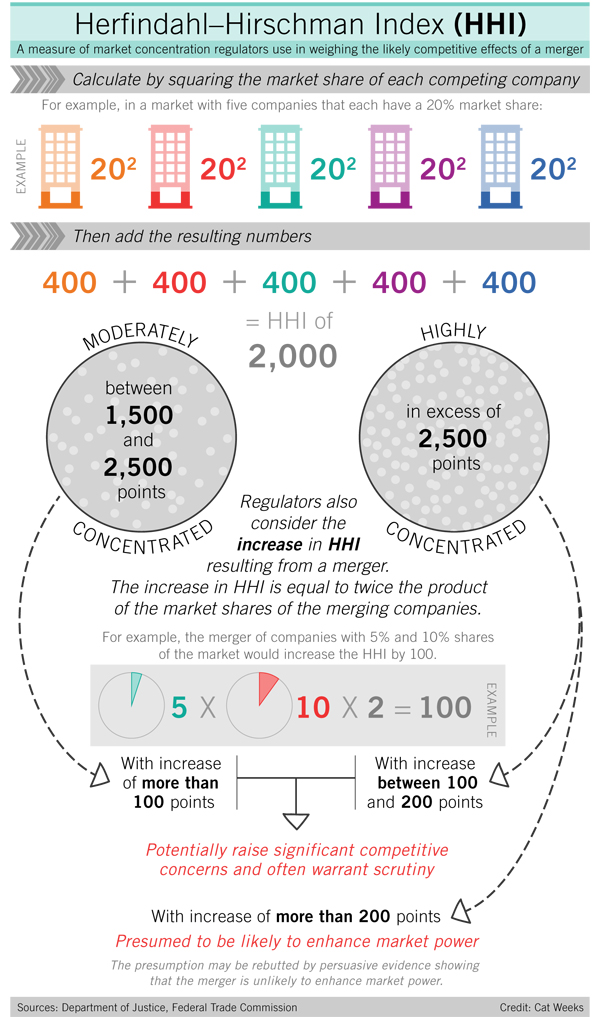 Given the current political climate, bank mergers could increasingly face the type of opposition raised by Cuomo. Glancz expects to see increasing M&A activity among large regional banks, and more consolidation will lead to bigger banks.

"There is a real populist sentiment in this country now," Glancz said. "And also there's sort of an anti-bank sentiment, too, because of the last crisis, and so therefore there is some skepticism, I think, as banks get bigger."

This article originally appeared on SNL Financial’s website under the title, "Divestitures on the horizon for KeyCorp's First Niagara deal"