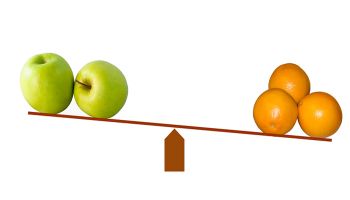 Investors tend to reward buyers in bank deals with lower price-to-tangible book value multiples, but advisers believe they should pay more attention to strategic benefits and earnings power at the combined company.

Likewise, the analysis found that investors did not consistently reward buyers in deals with lower price-to-earnings multiples.

One area where investor reaction was uniform was price-to-tangible book value; buyers in deals with a P/TBV of 200% or greater saw their stock rise a median 6.20% one year after announcement. Buyers who inked deals priced at less than 100% of TBV saw their stock price rise a median of nearly 19%.

Investment bankers acknowledge the emphasis investors put on P/TBV in deals, but some believe there are other more relevant factors to consider.

"Tangible book value to me is synonymous to the liquidation value of the company, which is not how banks should be valued," said William Hickey, principal and co-head of investment banking at Sandler O'Neill & Partners.

In some recent deals, investors have discounted the projected earnings accretion and pricing multiples and instead zeroed in on the TBV dilution arising from the deal. Such was the case in the KeyCorp/First Niagara Financial Group Inc. and Huntington Bancshares Inc./FirstMerit Corp. deals, at least initially. Both deals were valued around 170% of tangible book value, and stocks suffered on the day of their announcements. 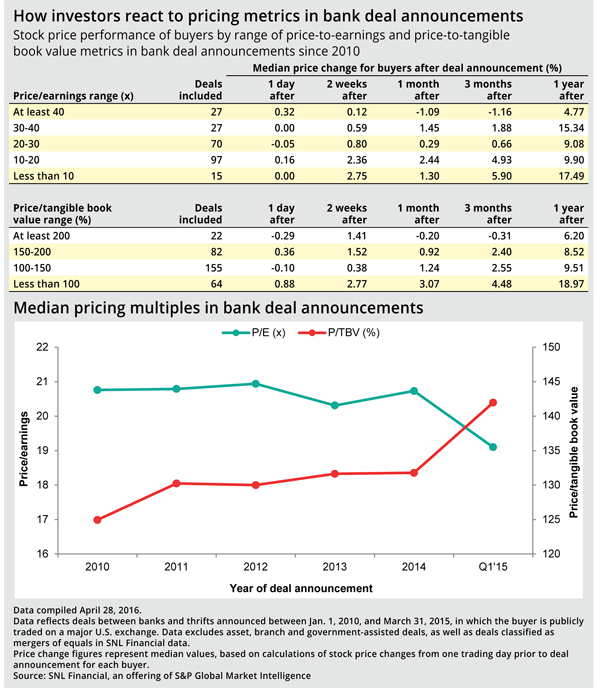 Analysts questioned KeyCorp's inclusion of revenue synergies in its six-year earnback calculation, which they believe would be even longer than the company projected; shares fell more than 10% following the announcement but have since caught up with the KBW Nasdaq Bank Index.

"We are comfortable with the dilution and earnback in this instance because of the clear path to increased earnings and increased capital return that this transaction provides without negatively altering our risk profile," said Huntington CFO Mac McCullough during the Jan. 26 deal call.

By late afternoon on the day of the announcement, shares had slid 8.51% to $8.05, but they have slightly outperformed the KBW Nasdaq Bank index since then.

Hickey cautioned investors against getting caught up in a deal's price or its dilution at the risk of missing the point of the transaction: the earnings stream the buyer is acquiring and what the combined earnings power of the pro-forma company looks like. He encouraged investors to also consider the strength of a buyer's currency, the expected cost saves in the transaction and the portion of cash used in the deal. "Certainly Sandler is not breaking deals down to 'this is good or bad because of book value dilution,'" he said.

While TBV dilution can overshadow earnings accretion in the minds of investors and deals with lower P/TBV often receive positive reactions from the Street, there are some exceptions to the rule. Jeff Adams, managing director at Banks Street Partners, pointed out that there is not necessarily a correlation between P/TBV and P/E. A deal that carries a lower price-to-tangible book value can still have a higher price-to-earnings multiple, which could necessitate a higher internal rate of return on the transaction. Westfield Financial Inc.'s $110 million acquisition of Chicopee Bancorp Inc., announced on April 4, is valued at 119.7% of tangible book but 34.2x earnings. 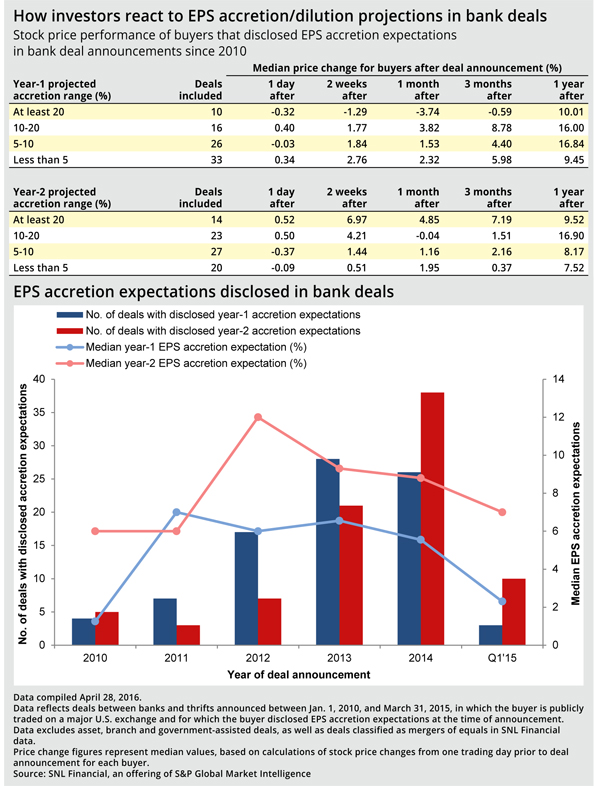 Some say bankers shouldn’t be ruled by investor sentiment

Other advisers believe bank management teams should not be solely focused on investor reactions to transactions because this might prevent them from landing opportunistic acquisitions. Bankers are "scared to death" of investors' reactions, said Dory Wiley, president and CEO at Commerce Street Capital. He believes confidence in a deal's attractiveness or shareholder value comes down to bank leadership.

"I've even seen bankers turn down a deal because they had the same P/E, all else being equal, and it looked great," he said. "Does the deal work or not? Does it work within the time frame? To me, that's a function of leadership and I have seen the world turn a little bit more toward deference to the investors."

Some acquisitive banks have management teams that have earned credibility with investors and have been rewarded with premium valuations, including names like Charleston, W.Va.-based United Bankshares Inc., Bank of the Ozarks Inc. and Prosperity Bancshares Inc.

But Wiley said executives who want to do deals need to focus on the long-term outlook and their track record of performance, and ignore the short-term fluctuations in stock price. He held up the first quarter's volatility as evidence that stock price fluctuations will happen regardless of management doing or passing on deals.

For banks that were working on transactions before the recent volatility hit, his advice was clear: "Pull your pants up, buckle up, and do the deal."

This article originally appeared on SNL Financial’s website under the title, "What investors want in bank deals, and what bankers say they should want"