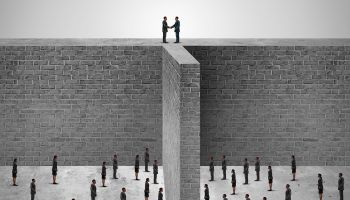 If there were any lingering doubts about Simmons First National Corp.'s commitment to marching westward into Texas, or about its gusto in using acquisitions to get there following a buyout delay, the company put them to rest this week with its third deal in as many months. [Editor’s note: This article originally ran on S&P Global’s site on Jan. 24, 2017.]

Pine Bluff, Ark.-based Simmons said after markets closed Jan. 23 that it signed a $462 million agreement to buy Fort Worth, Texas-based First Texas BHC Inc. and its Southwest Bank, a deal that would give it about $2 billion in assets and 16 branches in the economically vibrant Dallas-Fort Worth metro area.

This agreement follows a pair of late-2016 announcements. One was a $564.4 million play for Southwest Bancorp Inc. in December that would give Simmons roughly $2.4 billion in assets and a cluster of branches in Oklahoma, where Southwest is based, as well as new toeholds in coveted areas of Texas: Dallas, Austin, and San Antonio. The other deal, a bid for Jackson, Tenn.-based Hardeman County Investment Co. Inc. and its bank, announced in November, would provide about $460 million in assets.

All told, the deals would push Simmons from about $8.4 billion in assets to roughly $13.5 billion. The growth would allow it to establish a Southwest division covering Texas and neighboring states, enable it to surge past the important $10 billion threshold, and help to put it on a path toward becoming a $20 billion regional bank over the next three years, as Simmons Chairman and CEO George Makris Jr. noted to analysts during a Jan. 24 call to discuss the latest acquisition plan.

Makris said the deals would help it absorb additional costs tied to eclipsing the $10 billion threshold. When lenders leave what federal regulators generally consider the community bank realm—moving beyond $10 billion—they face more regulatory scrutiny and expenses, and they lose debit interchange income due to limits imposed by the Durbin rule. But by leaping over the $10 billion line with acquisitions, they tack on earning assets that can more than offset the costs, including Durbin-related losses, as Makris expects to be the case for Simmons.

Notably, Simmons said the latest deal, slated to close in the third quarter, should prove accretive in the first full year following the combination, thanks in part to cost savings of 32%. Combined with the Southwest Bancorp deal, expected to close in the fourth quarter, it also provides a foundation for the company's Southwest division, which will also include Kansas and Colorado. Vernon Bryant, chief executive of First Texas, has agreed to stay on with Simmons and lead the Texas operation, a vital priority, Makris said.

Outlook for the deal

Jacob Thompson, a managing director of investment banking at SAMCO Capital Markets in Texas, said the Dallas-Fort Worth area is indeed on solid economic footing, and that First Texas' bank has been generating steady loan growth there. That, he said, is a reflection of both the market's health and a talented lending team led by Bryant, a veteran of the market.

"They have a very knowledgeable and experienced team, so keeping management on board, that would help them build off of an already strong presence in a great market," Thompson said in an interview.

But the First Texas transaction does come at a relatively high price, and it puts a hefty M&A integration load on Simmons, analysts said.

S&P Global Market Intelligence's SNL Financial calculated the First Texas deal price to be 250.4% of tangible book. SNL valuations for bank and thrift targets in the Southwest region between Jan. 23, 2016, and the same date this year averaged 169.47% of tangible book.

"I think it's a fair price for a high-quality bank," Sandler O'Neill & Partners analyst Stephen Scouten said in an interview. "But it's not cheap by any stretch of the imagination."

The deal also leaves Simmons to straddle integration efforts on three acquisitions in the second half of this year, a workload Makris said he is confident the company can handle but one that analysts say is bound to present challenges.

Already, Simmons said last week, its acquisition of Hardeman County faced a delay because it received a public comment on its regulatory application. That deal, initially scheduled to close this quarter, will now close in the second quarter at the earliest.

Adverse public comments on proposed acquisitions are not rare and do not necessarily signal significant problems for a deal, but regulators are required to review such comments and Makris said that "is not a fast process."

Makris said Simmons had already filed the required paperwork, but the timing of regulators' response is "completely out of our control."

He called that "very frustrating" but said Simmons is forging ahead with confidence in the deal. And he said he had no reason to think the Hardeman County matter would trigger any delays on the other two deals on Simmons' plate.

The complexities of juggling multiple deals aside, Scouten said the First Texas acquisition is strategically appealing, given the platform in Dallas-Fort Worth in particular, and the likelihood of it "adding nicely to Simmons' future growth rate."

This article originally appeared on S&P Global Market Intelligence’s website under the title, "Simmons triples down on M&A, digs deeper into Texas"