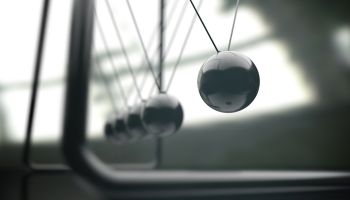 Bank merger-and-acquisition activity—the vast majority of it involving community lenders as the targets—continued at a steady but modestly slower clip during the first five months of 2017. But the pace picked up notably in the Southeast region, with activity strongest in North Carolina and Florida.

Southeast bested only by Midwest

Through May 23, there were 27 bank and thrift deals announced in the Southeast, up from 18 during the same period of 2016, according to an S&P Global Market Intelligence analysis. The 2017 tally includes six deals each in North Carolina and Florida.

In that span, there were 93 deals announced nationally, down slightly from 97 a year earlier. The Midwest region, long fertile ground for bank M&A, bested the Southeast and accounted for the most deals in the period, 35. But that figure was down from 51 in the year-earlier period.

Bankers say that enduring cost pressures on community banks, from heavy regulatory burdens to stiff competition from larger players, not only persist but have begun to tamp down optimism that bubbled up late last year in the sector.

Bankers and their investors cheered a pro-business agenda touted by leaders in the Republican-controlled Congress and by GOP President Donald Trump when he won the election last November. He took over the White House in January. Investment bankers say some would-be sellers temporarily shied away from cinching deals, going back to the Trump win, with hopes that a brighter operating environment would enable them to remain profitably independent.

But Republicans' work on health reform, deregulation, and tax cuts has since proven slow to develop, leaving small banks under strain and uncertain about their futures.

"For a lot of community banks, the Trump optimism has been tempered," Jacob Thompson, a managing director of investment banking at SAMCO Capital Markets, said in an interview.

Shifting back to Plan A?

As such, many of these small banks are returning to sale plans, Thompson and other investment bankers say, with some sellers wasting little time because they want to take advantage of the run-up in bank stocks following the election. 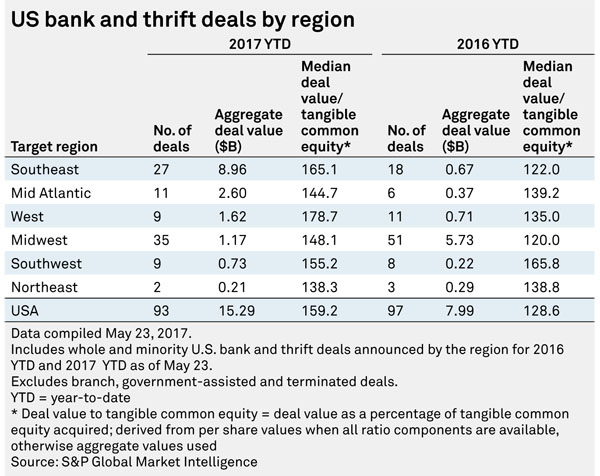 The rally bolstered buyers' ability to pay attractive prices in stock-driven deals. Southeast investment banker Thomas Rudkin, a principal at DD&F Consulting Group, said in an email that buyers with strong market valuations can use their stock to pay sellers higher prices than in 2016 and yet issue fewer shares to do so, minimizing the impact on existing shareholders and potentially making transaction financials more attractive to both sides.

Lee Bradley, a senior managing director at Community Capital Advisors and an investment banker active in the Southeast, agreed.

"Some of these guys are thinking they better do it now, get a decent price while they can," Bradley said in an interview. "You never know if the next down cycle might be right around the corner."

Among deals inked through May 23 with announced prices across the U.S., the aggregate disclosed deal value reached $15.29 billion, with a median deal value-to-tangible common equity ratio of 159.2%. That is up from $7.99 billion and 128.6% in the year-earlier period.

Investment bankers say activity is heating up with buyers eager to gain heft and market share in economically vibrant metropolitan areas in the Southeast, a region expected to generate long-term population growth. Aggregate disclosed deal value in the Southeast soared to $8.96 billion through May 23, up from about $670 million during the same stretch a year earlier.

"Everybody is looking for more size," Bradley said. "It's motivating buyers, especially down here." 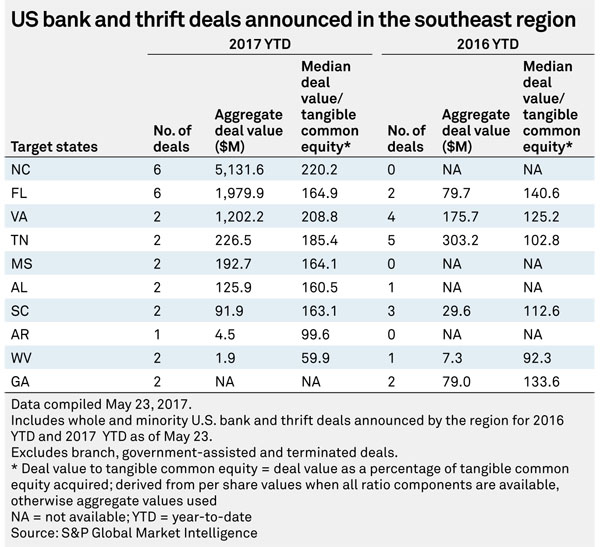 A case in point: Seacoast Banking Corp. of Florida, which announced two deals in May alone, the most recent a roughly $32 million plan to buy NorthStar Banking Corp. in Tampa. Seacoast closed a previous deal last month in Tampa. Its executives have said they want to build heft in prominent Florida markets.

President and CEO Dennis Hudson III said during a recent call to discuss the NorthStar acquisition that, once it pulls together its recent deals, Seacoast will look for more.

"As we see opportunities like these, we certainly would look at them," he said.

To be sure, a couple of deals with price tags greater than $1 billion and another that topped $2 billion—First Horizon National Corp.'s plan to buy out Charlotte, N.C.-based Capital Bank Financial Corp.—pumped up the pricing numbers in the Southeast this year. But the strong majority of deals were priced comfortably below $1 billion and, if the biggest deals were excluded, pricing metrics would still be up this year.

For example, Columbia, S.C.-based South State Corp. said in late April that it would pay an estimated $690.8 million in stock to acquire Charlotte, N.C.-based Park Sterling Corp. and its more than $3.2 billion in assets. In noting to analysts during a call that the deal would give South State more resources to drive growth in prominent major markets in the Southeast, from Charlotte to Richmond, Va., executives said they valued the transaction at 236% of tangible book, well above the average through May 23 of last year.

"It's a full price," Sandler O'Neill & Partners analyst Stephen Scouten said in an interview after the Park Sterling deal was announced. "But with the stocks up, they can afford it and it can still make sense."

This article originally appeared on S&P Global Market Intelligence’s website under the title, "Bank M&A gathers momentum in the Southeast"