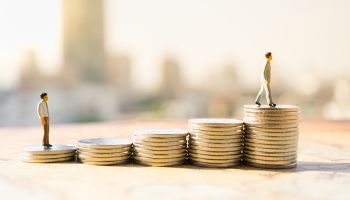 Recent midsize sellers have had a few things in common, such as good loan growth and high sale valuations, yet they also share a surprising similarity: an above-peer amount of noncore deposits.

Those deposits have not seemed to deter buyers, who continue to pay up for these franchises given their ability to grow loans and offer scale in desirable locations. Buyers anecdotally have viewed these funds with a wary eye, but recent deals indicate that sellers may offer attractive features beyond their funding base or an opportunity to roll off their higher-cost funds. 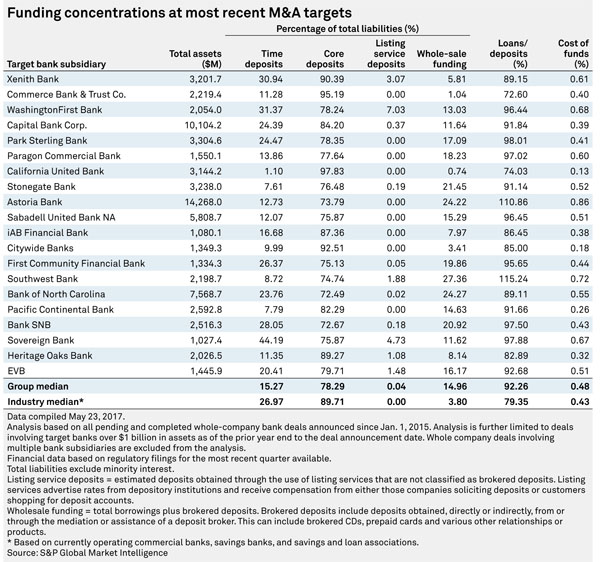 The median concentration of core deposits at the 20 most-recent sellers that had at least $1 billion in assets was 78.29%, according to an SNL Financial analysis. That is much lower than the industry median of 89.71%.

These banks also had a higher median of time deposits and wholesale funds compared to the industry. Among banks above $1 billion in assets that have sold since 2015, those with the greatest concentrations in time deposits had a cost of funds that was 10 basis points higher than the industry median. The SNL platform is owned by S&P Global Market Intelligence.

"Everyone talks about asset sensitivity from the left-hand side of the balance sheet and that's obviously well-documented," said Keefe Bruyette & Woods analyst Christopher McGratty. "That's purely math. The right side is more subjective. There are a lot of factors [that] go into that: Certain markets you're in. Are you banking commercial and retail customers? Do you have a high-growth strategy? Do you have to be more aggressive on pricing?"

McGratty was speaking about PrivateBancorp Inc., a seller that relied heavily on nontraditional deposits that were classified as brokered. But his comments echo other recently announced deals.

Noncore funding can be a double-edged sword for banks. Sellers with high-growth strategies may be more agnostic about funding sources and may have accumulated them through a variety of avenues. The funds can be quickly gathered and matched up against loans but also drive up the cost of funds or compress margins.

"Many of the banks with $1 billion-plus in assets that sold in the last three years were active acquirers, so the deposit mix they live with today is largely a result of acquisitions they've made over the past several years," said R. Lee Burrows Jr., CEO of investment banking group Banks Street Partners. He added that sellers with higher loan-to-deposit ratios may not have "strategically assembled" their deposit mixes to keep up with loan demand.

Sellers like BNC Bancorp, Stonegate Bank, and Park Sterling Corp. may have acquired their concentrations in noncore funds through deals of their own and leveraged them in attractive marketplaces that generated above-average loan growth.

Community & Southern Holdings Inc. and Talmer Bancorp Inc. were known for acquiring failed institutions that may have been loaded up on brokered funds; others like Astoria Financial Corp. and EverBank Financial Corp were thrifts that were historically funded with wholesale and time deposits.

Buyers, he said, are not always concerned. Although a large amount of core funding is attractive to buyers, Burrows said he is not aware of any of his clients who did a deal because of a seller's funding mix. Larger buyers may have better access to cheap or core funding, and adding a larger balance sheet can offset the target's higher cost of funds.

"You can correct the deposit mix over time," Burrows said.

Seller Southwest Bancorp Inc. had been in the process of remixing its funding base away from brokered deposits, but it was still "just OK" when it announced it was selling to Simmons First National Corp., said FIG Partners analyst John Rodis.

Simmons may have been more interested in the new markets it was acquiring; deposits were scarcely mentioned during the deal call. Before agreeing to sell to Pinnacle Bank, BNC Bancorp had focused on acquiring core deposits through M&A. At the time of the deal announcement, retail and jumbo time deposits still made up 25.8% of total deposits compared to Pinnacle's concentration of 9.6%, according to the deal investor presentation. BNC Bancorp's concentration will weight the pro forma company's concentration to 16.2%.

For nearly a decade, near-zero interest rates meant there was less of a difference between a bank that was funded with mostly core deposits and one funded with noncore deposits.

That could be changing.

For many of these sellers, the time may have been just right to take advantage of the postelection lift in bank stock prices to drive higher sale valuations while addressing any long-term concerns about their funding bases.

"You could argue 'get out while the getting's good,'" McGratty said. "It's not surprising some of the more beta or noncore funding companies are electing to sell. [For their acquirers], when you buy someone, you buy it for synergies or [as a] complement to your own company. Buying your weakness [is] not a bad strategy." 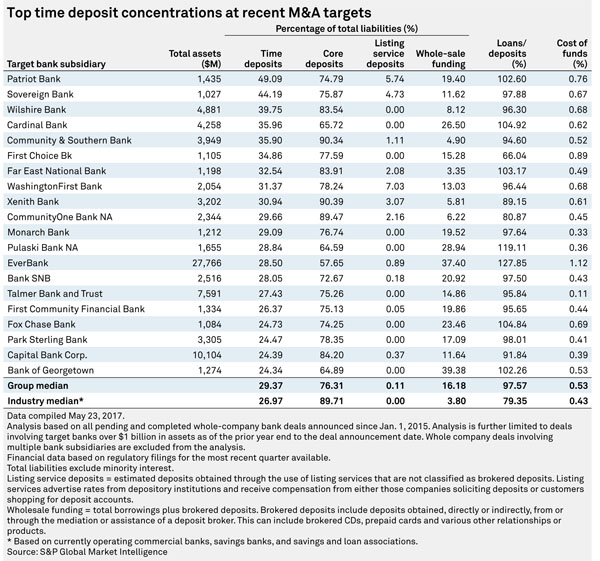