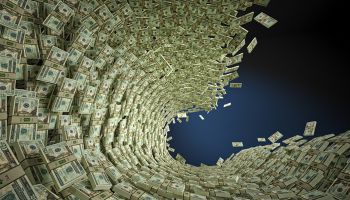 The Tampa, Fla., metro area has seen four local banks announce sales since the beginning of 2017, making it one of the most active areas for bank & thrift M&A in the country.

The area's thriving population growth and plethora of community banks started up before the financial crisis are driving factors.

The latest deal in Tampa was big.

Wayne, N.J.-based Valley National Bancorp announced July 26 it would buy Clearwater, Fla.-based USAmeriBancorp Inc., the second-largest bank based in the Tampa MSA, for $815.7 million in common stock. Clearwater is in the western part of the Tampa MSA along the Gulf of Mexico, but USAmeriBancorp has 14 branches throughout the Tampa and St. Petersburg areas. It also has 15 branches in Alabama, which were acquired when it bought Aliant Financial Corp. in a series of deals between 2009 and 2011. 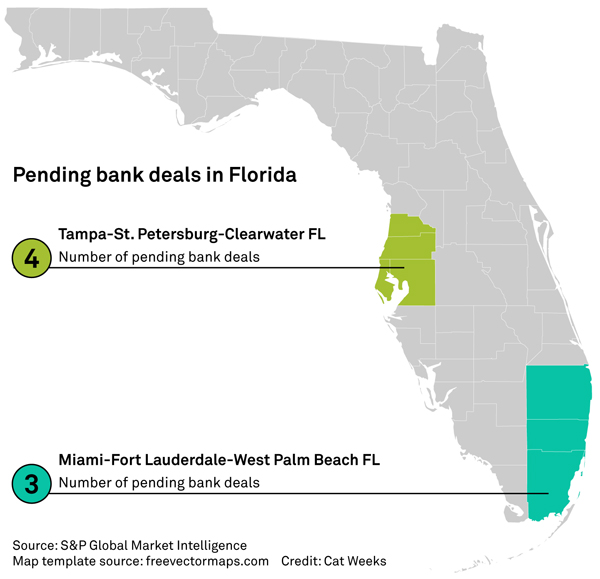 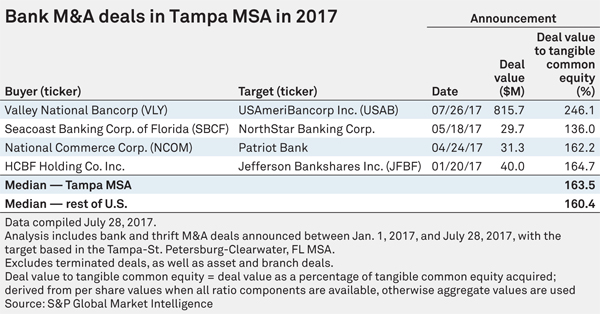 Tampa's demographics make it an attractive area of Florida for bankers. The metro area's population is second only to the Miami-Ft. Lauderdale, Fla.-West Palm Beach, Fla. area and it is No. 1 in Florida when ranked by people per square mile. Overall, it's the 18th most populous MSA in the U.S.

Valley National President Rudy Schupp extolled the Tampa area during the July 26 conference call to discuss the deal, according to a transcript.

Other executives in earnings calls this year have also mentioned Tampa's thriving bank environment, according to transcripts.

The CEO of homebuilder Taylor Morrison Home Corp., Sheryl Palmer, commented in February that Tampa has since replaced all jobs lost in the Great Recession, and the company's closings in Tampa were up "meaningfully."

A look a Tampa deals’ pricing

While the earlier three bank deals announced in Tampa this year have priced roughly in-line with the national median price to tangible book value for bank merger targets, USAmeriBancorp's price was a hefty 246.1% of tangible book.

The Tampa MSA has long been a hotbed of de novo and M&A activity. For instance, 2006 saw the sales of six banks in the MSA, followed by the establishment of eight de novo banks in 2007 (USAmeriBancorp unit USAmeriBank was among the banks started up in 2007). The area's banks were hit hard in the financial crisis, and six banks failed between 2010 and 2012, but Tampa still has 19 banks headquartered in the vicinity including 15 that aren't already merger targets. 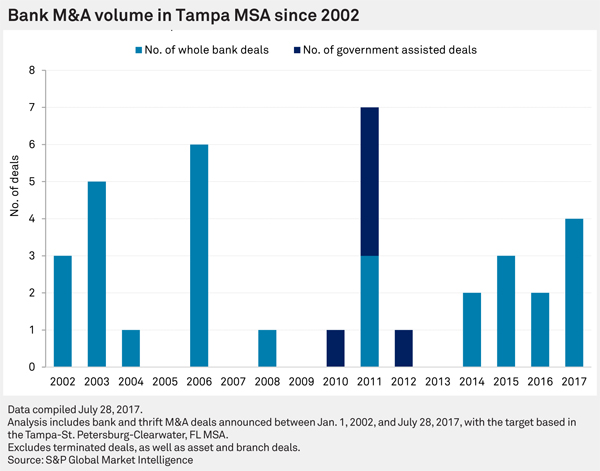 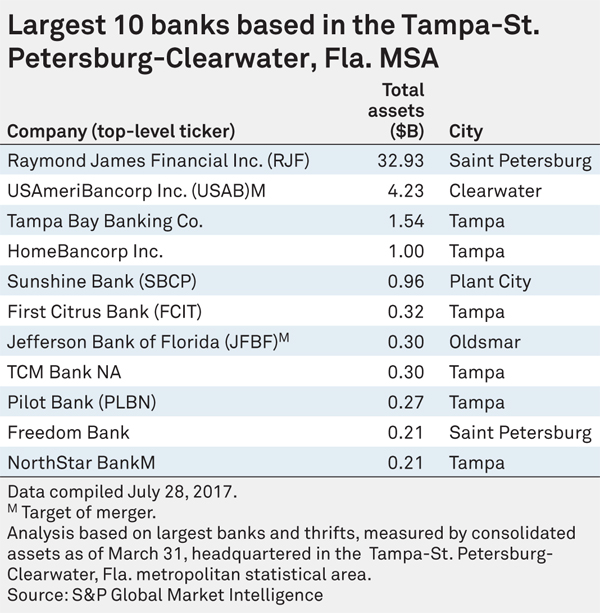 2017 is looking to be a particularly active year for M&A, as four deals have already been announced, compared to two deals announced in 2016. No new banks, however, have started up in the Tampa MSA since 2007. The only pending bank in organization in Florida is Winter Park National Bank in the Orlando-Kissimmee-Sanford MSA, the third-largest MSA in Florida by population.

In an Aug. 1 report, Raymond James analyst Michael Rose pointed out that the growing scarcity of banks in Florida means that the remaining publicly traded banks in the state, such as CenterState and Seacoast Banking, could be seen by investors as potential merger targets and their share prices will reflect it.

"The transaction for Florida’s fifth largest publicly-traded bank [USAmeriBancorp] leaves only a handful of ways for investors to play the ongoing consolidation of the Sunshine State," Rose wrote in the report. "Given the compelling demographics of the state, our view that Florida remains in the 'middle innings' of the recovery, and attractive tax/climate advantages, we believe the remaining players will benefit from increased scarcity value once [the Valley National / USAmeriBancorp] deal closes."

This is Valley National's third deal in Florida. It had previously focused its acquisitive energies on the greater New York City area and northern New Jersey. It bought its first Florida bank on the Atlantic coast in 2014 with the purchase of Boca Raton-based 1st United Bancorp Inc. for $314 million in stock. Valley National then went inland in 2015, buying Orlando-based CNLBancshares Inc. for $224 million in stock, before broadening its reach on the Gulf side with the USAmeriBancorp purchase. 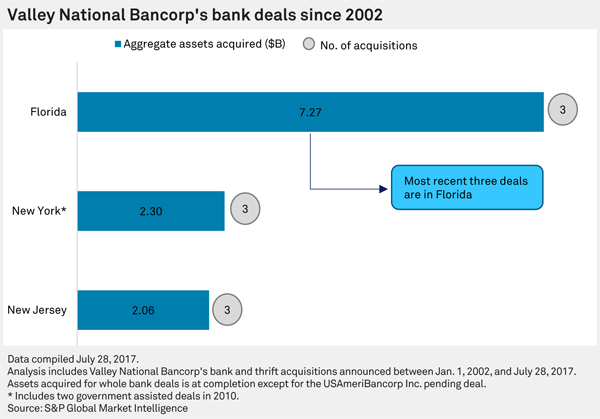