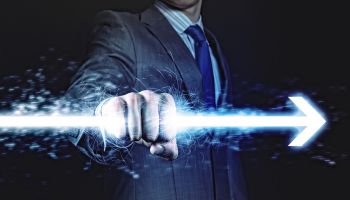 The unlikely marriage of Bank of America Corp. and Merrill Lynch & Co. Inc. brought with it the specter of a major culture clash, but the companies have managed to successfully transform each other.

Ten years ago, Merrill Lynch found itself on the path toward a sale when Stanley O'Neal resigned as chairman and CEO. The Oct. 30, 2007, resignation came less than a week after Merrill reported a $2.3 billion quarterly loss and a $7.9 billion write-down related to subprime exposure.

"The marriage of Merrill with Bank of America was a peculiar one to put it mildly," said investment banker and Whalen Global Advisors LLC Chairman Chris Whalen.

The transaction got off to a slow start as reports soon surfaced about financial adviser dissatisfaction at Merrill Lynch. Meanwhile, investor backlash about Merrill losses led to BofA's Ken Lewis losing his chairmanship and eventually forced him to step down as CEO.

But opinions have changed, said Winthrop Smith Jr., a former Merrill executive who authored a book that detailed the rise of Merrill Lynch. "I think history will show this was one smart acquisition by Ken Lewis," Smith said in an interview. 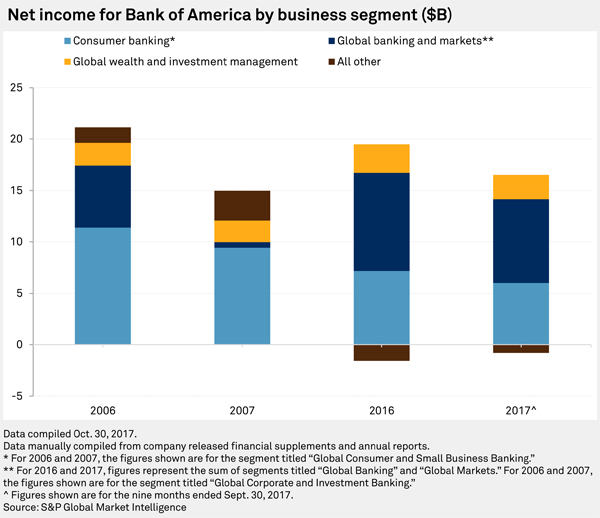 What is undebatable is that the deal significantly increased BofA's exposure to the financial markets.

Corporate banking, investment banking, and wealth management combined for 67% of BofA's net income during the first three quarters of 2017, up from 35% during the same time period a decade ago. 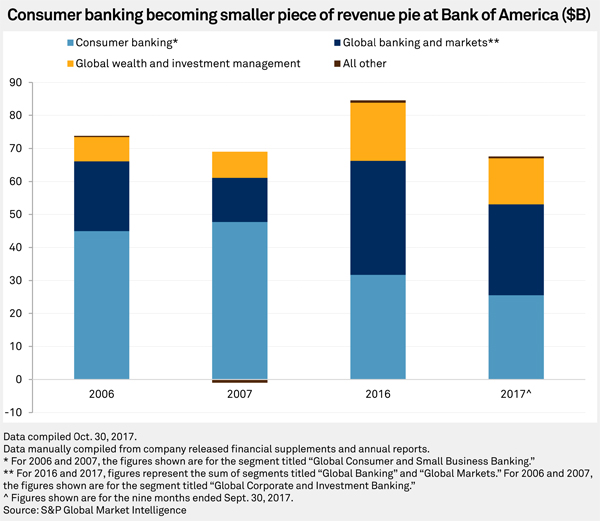 What Merrill brought to BofA

While it was made amid significant market and economic turmoil, the deal could have actually improved BofA's soundness because wealth management can generate stable revenue from assets-under-management fees. Steady fee revenue helps when banks are forced to build reserves during times of stress.

"Having noninterest income is always an indicator of stability," Whalen said in an interview.

By comparison, card income was the biggest contributor to BofA's noninterest income during the first nine months of 2006 and 2007, delivering more than 35% of such income in those periods. Card revenue proved less stable when it dropped by $5 billion year over year in 2009 to $8.35 billion because of higher securitized credit losses and changes in consumer behavior, according to the BofA's 10-K filed in February 2010.

While it was clear at the time that the deal would diversify BofA's business, the transaction still had the makings of a colossal culture clash.

"We looked down on banks," said Smith, whose father was the Smith in Merrill Lynch Pierce Fenner & Smith Inc. "We looked at them as bureaucratic and stodgy."

Investment bank mergers are notoriously difficult because the target's employees are often unhappy with their new management, and that leads to departures. An oft-cited example of an i-bank merger gone bad is Credit Suisse Group AG's 2000 acquisition of Donaldson Lufkin & Jenrette Inc.

But with BofA Merrill, the investment bank integrated better than expected. The crisis and the disruption it caused on Wall Street might have actually helped retention.

"Everyone has hunkered down and is just glad to have a seat," bank analyst Marty Mosby, who is now with Vining Sparks, said in 2014.

BofA Merrill has held its own in league tables over the years. In its financial supplement, BofA Merrill said it ranks third in net investment banking revenue through the first nine months of 2017; a top-three league table ranking was Merrill Lynch's goal in 2008 after the company finished in the top five during 2007.

From the deal's early days, it was clear that a key to the transaction would be the integration of the wealth management business, the "crown jewel" of Merrill Lynch, as Lewis said in September 2008. BofA has succeeded in helping boost the annualized revenue production of experienced Merrill financial advisers to $1.30 million as of Sept. 30 compared to $850,000 in annualized revenue for the Merrill Lynch private client group advisers at the end of September 2007. But the number of Merrill Lynch advisers is down, at 14,954 as of Sept. 30, compared to 16,610 at the end of September 2007.

A point of contention that has led to the exit of many Merrill advisers is the pressure to cross-sell BofA banking products, said Ron Edde, co-founder of recruiting firm Millennium Career Advisors. He said some advisers enjoy having access to the bank offerings, but do not enjoy feeling like they are pushed to put clients in the BofA products.

The first head of the financial advisers after the sale of Merrill left the position because of the banking product issue.

Being required to learn the bank products is more agitating for veteran advisers who want to focus on managing client assets, said Mark Yancey, managing partner of Attacca International LLC, which advises on the moves of investment management teams.

However, Yancey added that younger advisers, "the millennials," are more open to offering the banking products.

Media reports have said Merrill is among the companies emphasizing the recruitment of young advisers, not higher-cost seasoned ones.

But recruiters say Merrill will still pay up for advisers that have a significant book of business. That said, Merrill is a less desirable landing spot for experienced advisers than it was before the BofA deal, and Launny Steffens, who spent 38 years at Merrill, agrees that a stand-alone Merrill Lynch would have more success attracting top talent.

"I think people are looking at different areas today whether it's smaller boutique investment banks or smaller RIA firms where they would have more direct impact on those organizations," said Steffens, who founded the alternative investment management firm Spring Mountain Capital.

But Steffens said Merrill's benefits to BofA are undeniable. "Merrill Lynch was a very good acquisition for Bank of America," he said.

Razi Haider contributed to this article.