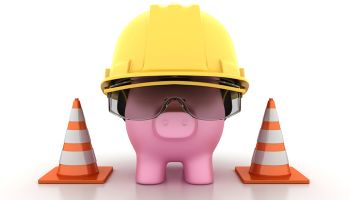 Construction in the Atlanta market is heating up again, and many banks are hoping that history will not repeat itself.

Followers of the Atlanta market say that activity has not reached the overheated levels witnessed just before the Great Recession, and note that the memories of the crisis that claimed scores of banks in Atlanta remain firmly in many community bankers' minds.

Walt Moeling, senior counsel at Bryan Cave LLP, said there are many cranes in the area, and noted that there are new condominiums and office buildings being constructed on all four sides of his firm's midtown Atlanta office.

"Mark Twain said history doesn't repeat itself but it rhymes, and this rhymes," Moeling said in an interview. "The story I get is that most of the big construction is funded by the larger banks which have the capacity to do that. The smaller banks are sticking to their small business customers."

Georgia construction jobs in March 2016 increased 9.5% from year-ago levels, which marked the strongest growth since 2000, according to the Bureau of Labor Statistics. That growth follows 5%-plus year over year growth in construction jobs reported in every month since October 2013.

The construction activity comes as job growth is expected to remain strong in metro Atlanta. Jeff Humphreys, director of Simon S. Selig, Jr. Center for Economic Growth, which is part of the University of Georgia's Terry College of Business, projected in November that job growth in Atlanta would outpace national employment growth in 2016.

The new development has also continued as office vacancy rates in the Atlanta market have declined. Vacancy rates in the market reached a 15-year low in the first quarter, according to CBRE's Atlanta research department. CBRE recently found that Atlanta office rents grew in the first quarter for the ninth consecutive quarter. Given rent increases and declining vacancy rates, builders are responding with new space, CBRE said, highlighting three developments under construction that will bring more than 1 million square feet to the market, as well as three more speculative developments anticipated to begin construction in 2016.

"Over the past months, many Atlanta office assets have been placed on the market to trade or have traded," Dan Wagner, CBRE Southeast Research Manager, said in an April 21 news release. "While this would typically indicate the market is nearing the top of a cycle, Atlanta fundamentals remain resilient."

Many banks in Atlanta remember just how much the market fell from the top of the previous cycle, and those institutions have not forgotten the pain that followed. Atlanta produced more bank failures than any other metro area in the U.S., largely due to excessive lending concentrations and a lack of core funding.

Advisers working with banks in metro Atlanta have said that many institutions made structural mistakes, underwriting loans to projects rather than the quality of borrowers, relying on high-net-worth individual guarantees as collateral and using interest reserves in acquisition, development and construction loans consistently. Those reserves prevented loans from becoming distressed much earlier and might have given some banks a false sense of confidence, but eventually stress reared its ugly head.

While advisers say building activity has resumed in force, they note that the more recent activity looks different than in the years before the credit crisis, where residential construction fueled banks' growth. Construction activity is now more focused on the commercial and multifamily sector, they say. 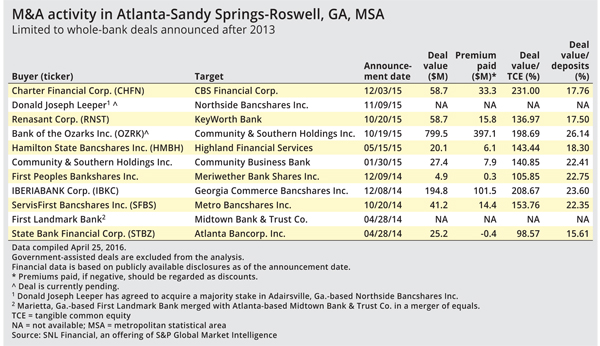 R. Lee Burrows Jr., CEO at Banks Street Partners, also noted that the residential real estate market still has not fully recovered from the downturn, highlighting that home prices are not back to their 2007 levels by "any stretch of the imagination." He said banks with less than $50 billion in assets remain cautious and the Great Recession is still "very present" in their minds.

Banks that have operated in Atlanta for years have also faced a new round of competition from newer entrants. Several community bank and smaller regional players have entered the metro Atlanta market in recent years, with ServisFirst Bancshares Inc., IBERIABANK Corp., Bank of the Ozarks Inc., Renasant Corp. and others building through acquisitions. Still, even as traditional M&A activity has resumed in force in Atlanta, large banks such as SunTrust Banks Inc., Wells Fargo & Co., Bank of America Corp.. and BB&T Corp. still dominate the market. Burrows noted that those large institutions are currently financing most of the larger construction projections.

"In the metro area, there is a lot of industrial and residential growth, but primarily around apartments. And apartments appear to be the next bubble to burst in Atlanta and many other big markets," Burrows said in an interview.

Leading up to the last downturn, small and large banks alike financed the considerable construction activity in metro Atlanta. Virtually all institutions in Atlanta took part in the pre-crisis building boom, but that is not necessarily the case today.

"You really had that aggressive growth at that level being funded by everybody," Moeling said of the growth before the credit crisis. "There is much more awareness of the issue [now]. And it's not a top to bottom banking issue to the same extent. The big projects are being funded by the much larger institutions by and large."

Burrows said community banks are ceding business to larger banks simply because they cannot match their prices. Some of the nation's largest institutions can be far more aggressive on rates because they have lower costs of funds, other sources of revenues and continued access to the capital markets.

While some banks might be proceeding with caution, regulators are also watching the resurgence in commercial real estate, and have said that they plan to pay "special attention" to CRE lending risks in 2016.

Some banks operating in the metro Atlanta market have said that they are taking time to examine their portfolios given the recent growth. Synovus Financial Corp. Chairman, President and CEO Kessel Stelling Jr. recently said that he is focusing on loan quality, not quantity. Synovus Chief Credit Officer Kevin Howard added that the company is pulling back from construction lending. He said the company is watching rent growth versus wage growth, and noted that there are a couple of markets that are currently ahead of themselves.

Bryan Cave's Moeling said pulling back in select lending areas and markets and focusing on quality over quantity is not something that banks often expressed before the downturn.

Other banks are being cautious to not put too much of their balance sheet at risk and could end up deciding to return more capital to shareholders opposed to pursuing more aggressive growth.

Burrows said many small bank management teams that lived through the Great Recession are hesitant to lever their capital below 9%. He said many of those institutions feel like they are doing a good job because they have a CAMELS 1 rating and operate in strong regulatory standing, but he said many of those institutions are reporting returns on equity in the mid-to high-single digits due to their high capital levels.

Burrows said those institutions are currently stock piling capital, and he believes they will be reluctant or struggle to lever their capital bases even more. That scenario likely will prompt those institutions to return more capital to shareholders through increased share buybacks and dividends, he said.

"If you're showing your shareholders a 7% or 8% return on equity and you're complementing that with 3% dividend yield, in this interest rate environment, I would say that most shareholders would be pretty happy with that," Burrows said. 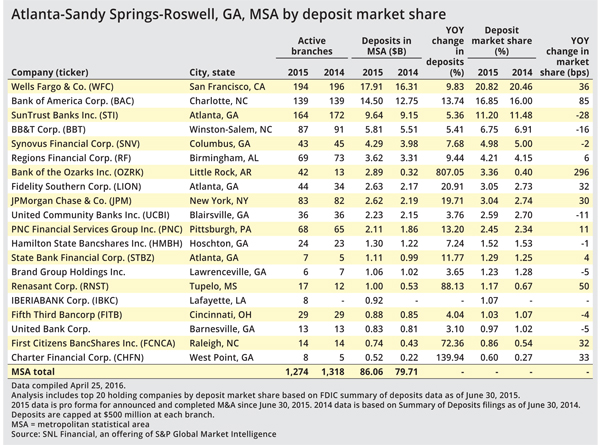 This article originally appeared on SNL Financial’s website under the title, "Building in Atlanta conjures up memories of the past"