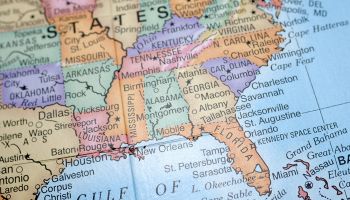 Banks in the Eagle Ford Shale region of southern Texas have too much of what’s usually a good thing—deposits. The region is one of the nation’s oil boom areas, a distinction shared with the Permian Basin region in northern Texas.

With an abundance of deposits and few new loans, institutions in the Eagle Ford area have been bumping up against their capital ratios. Some have even had to raise additional capital to match the growth in deposits and the concurrent growth in assets, chiefly investment securities due to the lack of loan demand in the cash-rich region.

These banks face a challenge faced by many institutions throughout the country: What to do with all the deposits in a strange interest rate environment when loan demand frequently is anything but robust. In many areas the glut of deposits arises from a continuing search for a safe place to keep funds when few really attractive nondeposit places to put the money can be found.

These observations come from officials of the Southern District of the Comptroller of the Currency, who recently held a press briefing devoted to the status and outlook for the diverse region. While loans grew in 2013 and continue to do so into 2014, officials have been concerned about how banks have had to handle the “Surge.” The region includes Alabama, Arkansas, Florida, Georgia, Louisiana, Mississippi, Tennessee, Texas, and Oklahoma.

Lay of the land

Officials reported that 86% of the community banks and savings institutions held composite CAMELS ratings of 1 or 2 at the end of 2013, an indicator of general strength. OCC reported that 95% of banks in Texas and Oklahoma had a 1 or 2 rating.

“Reductions in provision levels have declined to about as low as they can go,” the agency reported, “and there should be little additional future earnings improvement from this source.” In addition, gains on securities helped, but officials said this was a limited source of help and would continue to be of limited assistance to future earnings.

Officials said that nearly 75% of district banks saw net interest margin fall by at least 20 basis points, and only 17% saw an increase in margin of 10 basis points or more.

Numbers tell the story of the “Surge” best. Officials said that in the fourth quarter of 2009, banks in the region had $25 billion in investment securities. In the fourth quarter of 2013, this had risen to $37 billion. What sets the latter apart is that the bulk of it has been invested in securities with maturities over five years. This reflects a stretching for yield in the face of few other attractive options for placing the flood of funds.

“The lack of yield in short-term rates is enticing banks to increase their exposure to longer-term assets,” OCC stated. “The ratio of long-term assets to total assets continues to trend upward.”

Long-term assets are defined as those where maturity or repricing is greater than five years, and also includes collateralized mortgage obligations with a maturity of greater than three years. The agency pointed out that banks in the region are locking in rates that are close to all-time lows, which has increased their interest rate risk.

Loan picture across the district

Gilbert Barker, deputy comptroller for the area, reported that loans grew 4% among community national banks and federal savings institutions in the nine-state district. There were pockets of higher growth in such areas as Texas and Oklahoma (both at 11%) and 6%-7% in parts of Florida. (This reflects new loans less pay-offs.) Officials said in some cash-rich areas businesses have not only not been borrowing significantly, but have often been paying off outstanding loans.

Barker said that, overall, problem loans are down in the district, the overall economy is stable, and banks generally have plenty of capital. However, reflecting varying sources of economic strength across the diverse region, he said that the degree of improvement seen is uneven. Some areas, such as Georgia and Florida, are coming back from devastating real estate troubles, while Texas, Louisiana, and Oklahoma did not hit the lows other states did. Loan growth is ahead of the norm in some cities, such as Tampa and Miami, while cities such as Birmingham, Little Rock, and Nashville lag.

Barker said that banks in the Southern District make a higher proportion of commercial real estate and C&I loans than in the agency’s other districts. With competition stiff throughout the district, he said examiners have been stressing the importance of making sure they stick to their underwriting standards. For the most part they appear to be doing so, Barker said.

“Our advice to bankers is to remember what we’ve been through,” said Nanalie Andress, associate deputy comptroller for the district’s Dallas office. “We ask them to review their policies and be sure that their policies reflect their institutions’ risk appetites.” Officials said that classified assets among community institutions in the district stood at 25% of capital at the end of 2013, versus 34% at the end of 2012.

“There’s a saying in banking that bad loans are made in good times,” said Barker. “The best supervision is done in good times. We do our best work in times like now.”

Reflecting the strong energy activity in the district, Barker said that “our biggest concern is the price of oil.” He said this is very much on bankers’ minds, too.