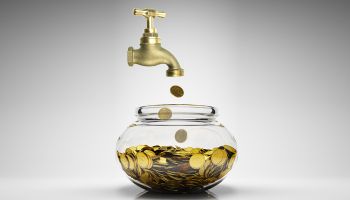 While the banking industry is $100 billion short of complying with the liquidity coverage ratio, industry experts believe banks can make up the shortfall with relative ease.

On Sept. 3 financial agencies adopted the liquidity coverage ratio (LCR), without making major changes to the initial proposal, which effectively required systemically important financial institutions to hold enough liquid assets to operate for a short time period in the event of a financial and liquidity crisis.

The final rule came with few surprises for institutions subject to the LCR and should put them on a relatively smooth glide path toward compliance during the remainder of the year, even if they are currently falling $100 billion short of complying with the provision.

David Wright, a managing director at Deloitte & Touche LLP, said that the $100 billion shortfall figure cited by the Federal Reserve when approving the LCR might sound large, but it likely will not be too challenging for banks to fill that gap given the large size of institutions as well as the pressure they have faced from regulators to build liquidity in recent years.

"In the last three or four years, liquidity has been a real big focus of the Fed and particularly supervising the largest firms," said Wright, who spent close to 20 years at the Federal Reserve before joining Deloitte in July 2014. "As a consequence, they are in a much better position today to meet this final minimum requirement had there not been a whole lot of work going on in the supervisory process leading up to this."

The LCR applies to banks with more than $250 billion in assets, institutions with at least $10 billion in foreign banking assets and subsidiaries of those large banks with at least $10 billion in assets. Banks with assets between $50 billion and $250 billion will be subject to a less stringent LCR. The largest firms will begin complying with the LCR Jan. 1, 2015, reaching full compliance by Jan. 1, 2017, while banks subject to the less stringent provision will not have to begin complying with the rule until Jan. 1, 2016. 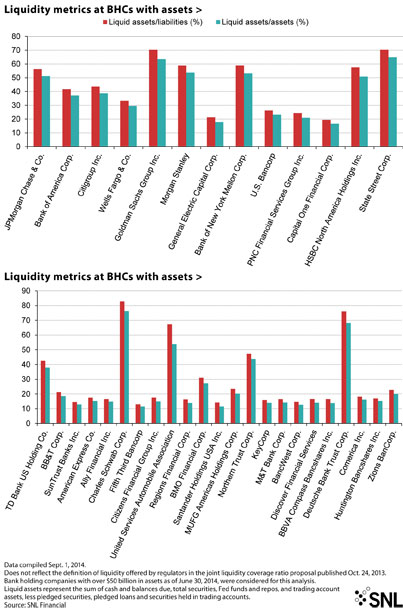 What banks and analysts are saying

Many banks, particularly those over the $250 billion threshold, have prepared for the provision for some time and several have stated over the last year that their LCR stands well in excess of 100%.

The Federal Reserve said when approving the LCR that most institutions are already well-positioned to achieve compliance despite currently posting a $100 billion shortfall.

The sell-side community shared that sentiment. BMO Capital Markets analysts Peter Winter and Lana Chan noted in a report reviewing the final rule that LCR compliance will not be a major issue for banks under their coverage universe.

"Bank management teams have been making balance sheet adjustments to prepare for this rule since late 2013 and are well positioned to achieve compliance by the end of 2014," the analysts wrote in a Sept. 3 report.

Keefe Bruyette & Woods analyst Brian Kleinhanzl also noted in a Sept. 3 report that most banks will be able to comply with the final LCR without major impacts on earnings. The analyst noted, though, that banks may have to take on duration risk in their investment portfolios as an offset.

Over a longer-term horizon, regulators noted that the LCR will better prepare large banks should a crisis arise and give the supervisory community more time to assess the root of the problem before taking action. Deloitte's Wright noted that in the aftermath of past downturns, banks' liquidity positions returned to more normal forms in the years following a crisis. After a few years, banks held liquidity levels that the market mandated to maintain a high rating and strong level of confidence, he said. But, under the LCR, institutions will maintain an elevated level of liquidity heading into a crisis, he said.

"It's less procyclical, it's more forward-looking, and it's a lot more liquidity than would have been held in the past. Of course, it's a lot more costly because there's a fair amount of dead weight assets that have to sit on the balance sheet as an insurance policy against a loss of confidence and abrupt shift in market stability," Wright said.

Those "dead weight assets," which carry lower yields than banks could find elsewhere in the marketplace, come in the form of "high quality liquid assets" (HQLA) that banks subject to the LCR must hold. Any covered institution must hold HQLA greater than, or equal to, its projected cash outflows minus its inflows during a 30-calendar-day stressed scenario.

Fed officials opened the door to classifying some munis as HQLA at some point down the road. The Fed said that its staff has considered which munis could potentially qualify as HQLA and anticipates that it will return with research on the issue. FDIC Chairman Martin Gruenberg, however, said that his agency also considered treating munis as HQLA, but determined to not classify the securities as such at this point in time. Regulators did assign a lower outflow rate to collateralized municipal deposits in the final rule.

SNL data shows that bank holding companies with more than $50 billion in assets hold a substantial amount of municipal securities. At the end of the second quarter, those institutions held close to $155 billion in municipal bonds, in aggregate.

Still, even without the inclusion of munis, most banks have enough HQLA to comply with the LCR. The real challenge, advisers say, will come in implementing the systems to track the daily reporting requirements of the LCR. Banks with assets between $50 billion and $250 billion were given reprieve in the final rule and only have to conduct the calculations on a monthly basis, while larger institutions will still have to conduct daily calculations, though they were given a longer phase-in period than originally proposed.

Morrison & Foerster Partner Oliver Ireland, speaking before the final rule was approved, said that absent wholesale changes to the LCR, the provision would not drastically impact the way banks operate since they have already worked toward compliance. The challenge for banks will come in implementing the systems and processes necessary to prove they are in compliance with the LCR.

"That process will disclose problems that may have been there in the original rule that people just didn't get to because they didn't drill down far enough and there may be problems in the final because they didn't get to comment on it," Ireland told SNL. "The real challenge to this rule is implementing it and then figuring out what the market looks like afterwards. … You're not going to know that for some time." 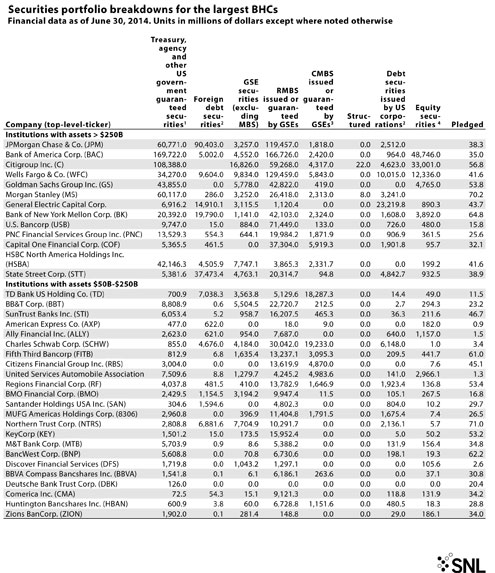